Handmade velvet for the restoration of the Dresden Royal Palace

Finally, after 33 years since the beginning of its restoration, the heart of the Dresden Royal Palace has opened to the public. Nine state rooms, including the audience chamber, which is decorated with one of the most remarkable Italian upholstery velvets we’ve ever produced. And this is its story.

The eventful history of the Dresden Royal Palace

On the night of February 13th, 1945, the city of Dresden was subjected to carpet bombings that razed to the ground a large part of the historic center.

One of the monuments reduced to rubble was the Royal Palace, a Renaissance building which dates back to the 1400s. But it was Augustus II the Strong, king of Poland and prince-elector of Saxony, three centuries later that transformed it into a late-Baroque masterpiece.

He had visited Versailles when he was young, and its grandeur had fascinated him. So, he decided to turn the palace’s state rooms into a worthy competitor to its French model. 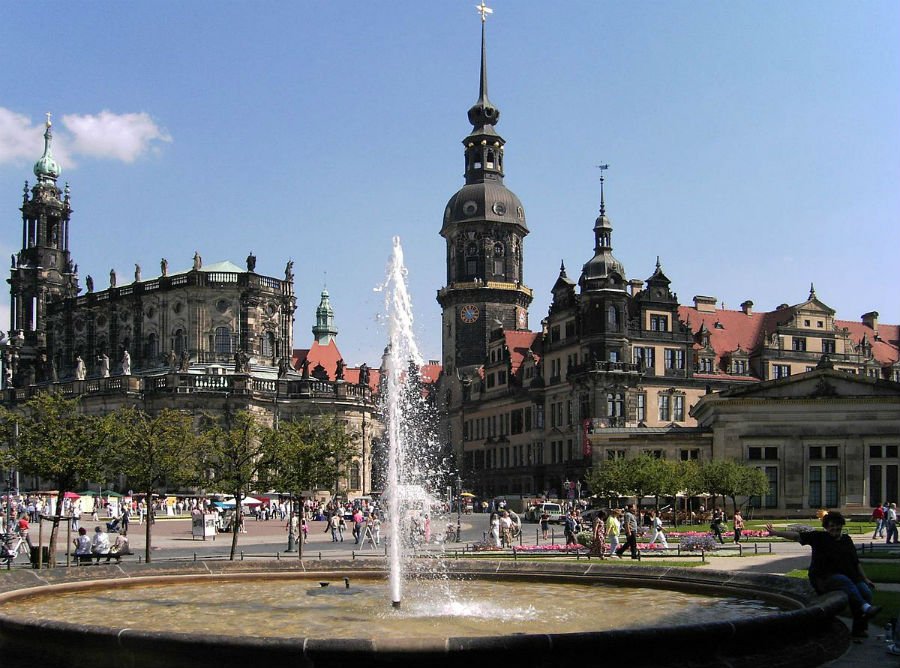 After the end of the war, the palace repeatedly risked being dismantled: the bombs had burnt it to the ground, only its foundations were still standing. Any attempt to restore it seemed impossible.

But it was one of the masterpieces of Renaissance in Germany, and this is why people managed to protect it. Finally, in 1986, the local government decided to rebuild it. So, after a long period of research, and the use of substantial financial resources, numerous masters and expert craftsmanship skills, the building has finally returned to its former glory.

The inauguration date, in 2019, was not chosen by chance. It marks the 300th wedding anniversary of Frederick Augustus, son of Augustus II, and Maria Josepha of Austria, heiress to the Hapsburg Empire.

On that very occasion, in fact, Augustus II had the royal State Apartments constructed, including a banquet room, two foyers, an audience chamber with the throne and the bedroom with a magnificent imperial bed. 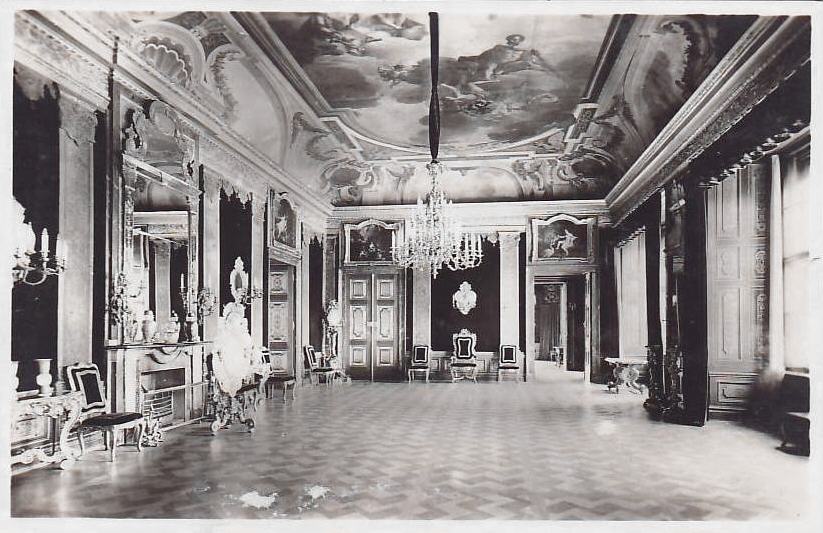 The audience chamber in a 19th-century photo

The most important of these rooms was the audience chamber, used for representation purposes, where you can find the throne, covered by a canopy. These two elements, as well as the walls and the curtains were made of the same crimson velvet.

It was in March 2015 when the curator of the restoration project asked us to recreate the upholstery fabrics of this room in the same velvet, faithfully reproducing the technical characteristics and color of the original. She then gave us an authentic sample of the fabric, the only fragment saved from the fire, which our technical director, Emanuele Bevilacqua, carefully analyzed.

In 2017, the production of crimson velvet began with a fabric height of 52cm, with a total of 5,280 threads of silk organzine between the underlying warp and the hair warp. The weft was also made of silk organzine. There were 101 threads per cm. The red dye was made using cochineal extract, which at the time was the most expensive red available.

To reconstruct the fabric, faithful in quality and characteristics to the original, a mechanical loom wasn’t enough; it would not produce a pile as thick as the original fabric.

This is why the State Art Collections of Dresden gave this commission to a traditional fabric manufacturer using the same handlooms employed in the 18th century: Tessitura Bevilacqua. 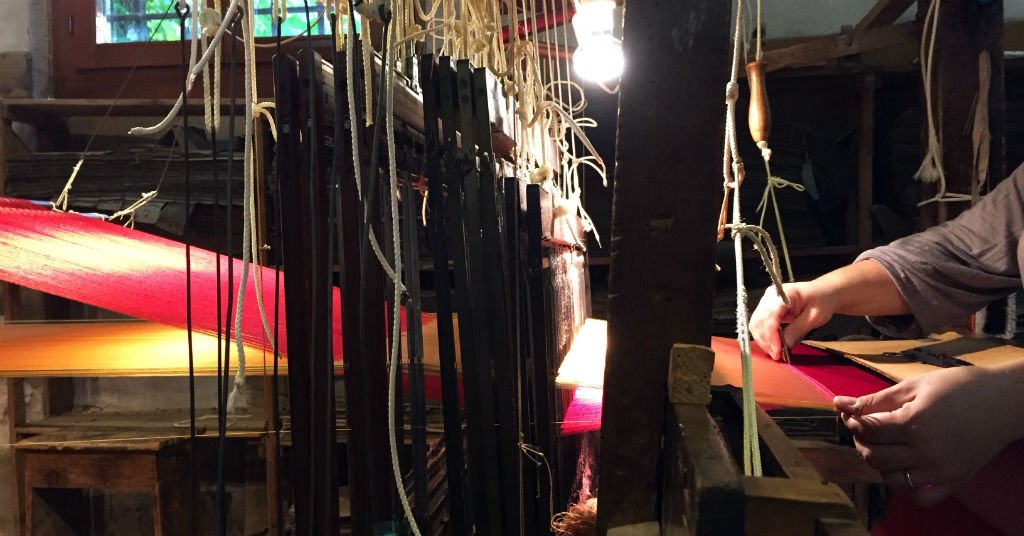 Finally, today we can admire the 740 meters of crimson velvet that decorate the magnificent audience chamber, proud to have contributed to bringing the palace to its former glory with the work of our technical staff and weavers. 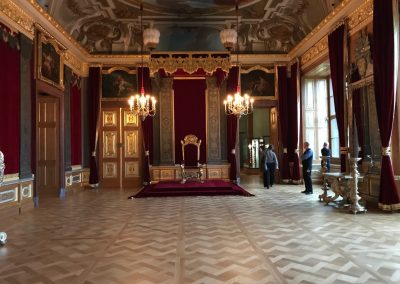 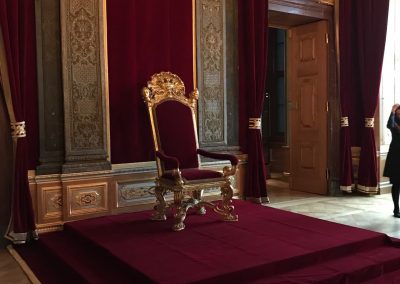 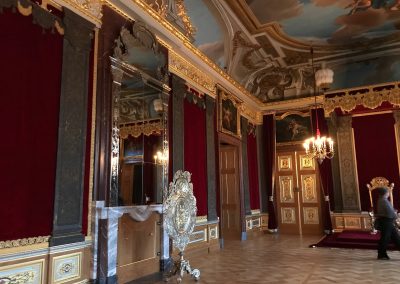 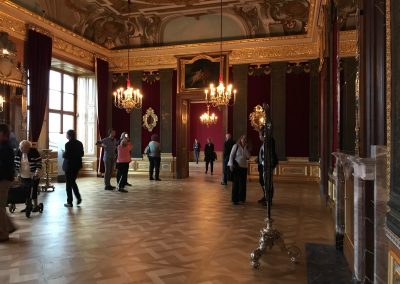 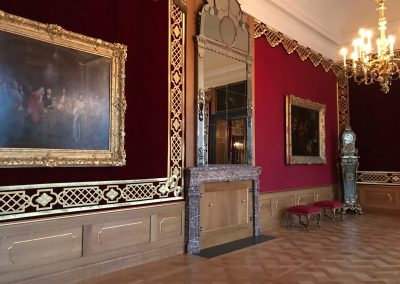 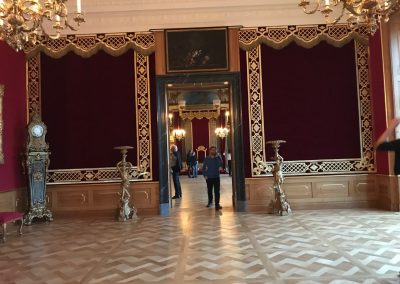 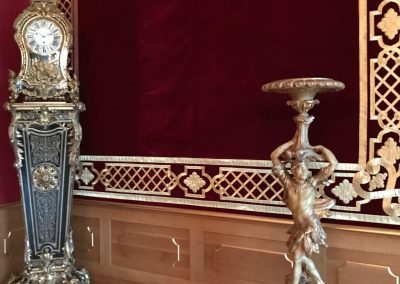 The audience chamber after the restoration