Weaving according to Diderot and D’Alembert

A work by an unknown number of intellectuals, the most renown of which are two, Diderot and D’Alembert, the Encyclopédie ou Dictionnaire raisonné des sciences, des arts et des métiers is the first universal collection of knowledge, the first encyclopaedia. An unprecedented work, born in the 18th century, which tried to cover all of the sciences, arts and crafts. Weaving included. And it’s a unique piece of evidence on the production of silk fabrics in the modern age and before of the advent of industrialisation.

But for the Tessiture Luigi Bevilacqua this Encyclopaedia represents the proof that its looms are original.

Antique looms for the production of silk fabrics

If you take a look at the images at the end of the page, you’ll understand why the Encyclopédie is such an important text for us. The photos are, indeed, those of our rooms at 1320 Santa Croce, Venice. The drawings, on the other hand, are the plates I, XXIII, XXVI, XCII and CIV from the sections dedicated to passementerie and silk manufacture, both in the 11th volume of the Encyclopaedia.

Plates I and XXIII: the warper and how it works

Plate I shows a warper, i.e. the machine necessary to prepare the warp before setting it up on the loom. It’s a rotating warper, just like the one in our weaving mill, where the thread is fixed to pegs and wound up to a spiral to get the right length to make the fabric. That is the operation depicted on plate XXIII, where a woman is, indeed, warping a thread on this machine.

On plate XXVI, on the other hand, there’s a creel: this machine is used before of the loom, because it helps you loading the threads on the loom. How? Thanks to the spools, placed in such a way as to easily unroll each thread, without tangling it.

On plate CIV we’re already in the middle of the job: the 7 small images you see at the top are wires of cut velvet and the pieces of a trevette, the blade used to cut the velvet’s pile. But the drawing gives you a 3D idea of a section of cut velvet.

Plate XCII: the loom, or the best for last

And now there’s only one plate left, XCII. We’ve left the most interesting piece of the collection till last, because this plate contains the lateral section of a loom, shown in its full height and in the exact moment before drawing-in.

So the Encyclopédie by Diderot and D’Alembert shows us which were the machines actually used in the 18th century for weaving. And which we still use today. 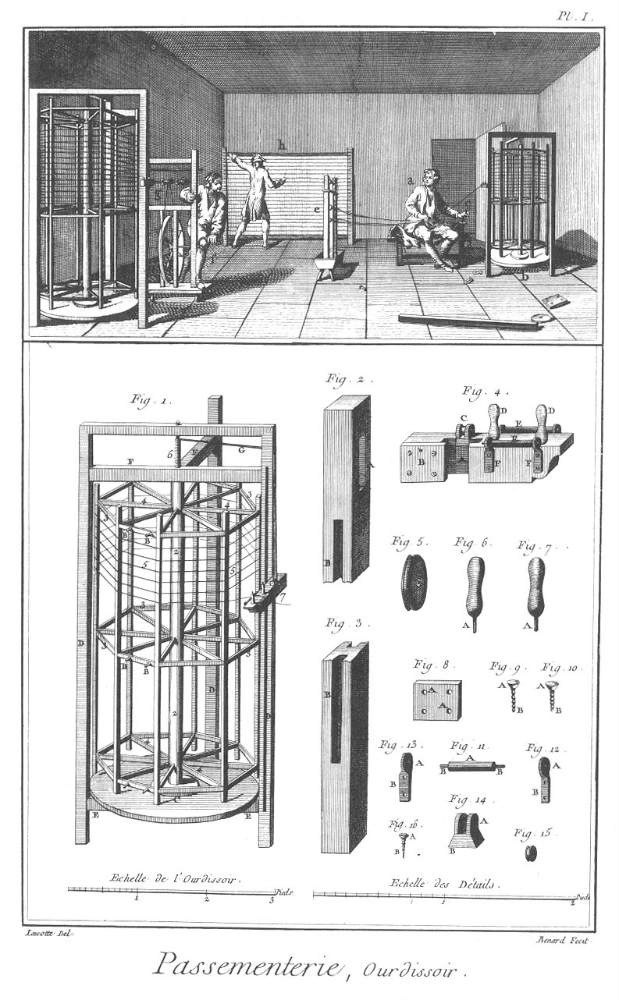 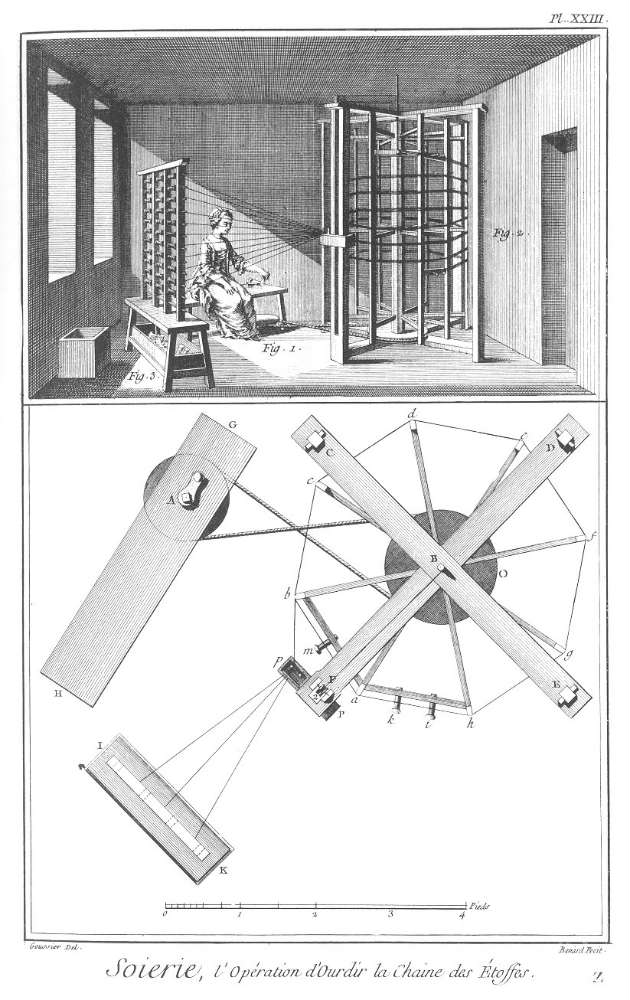 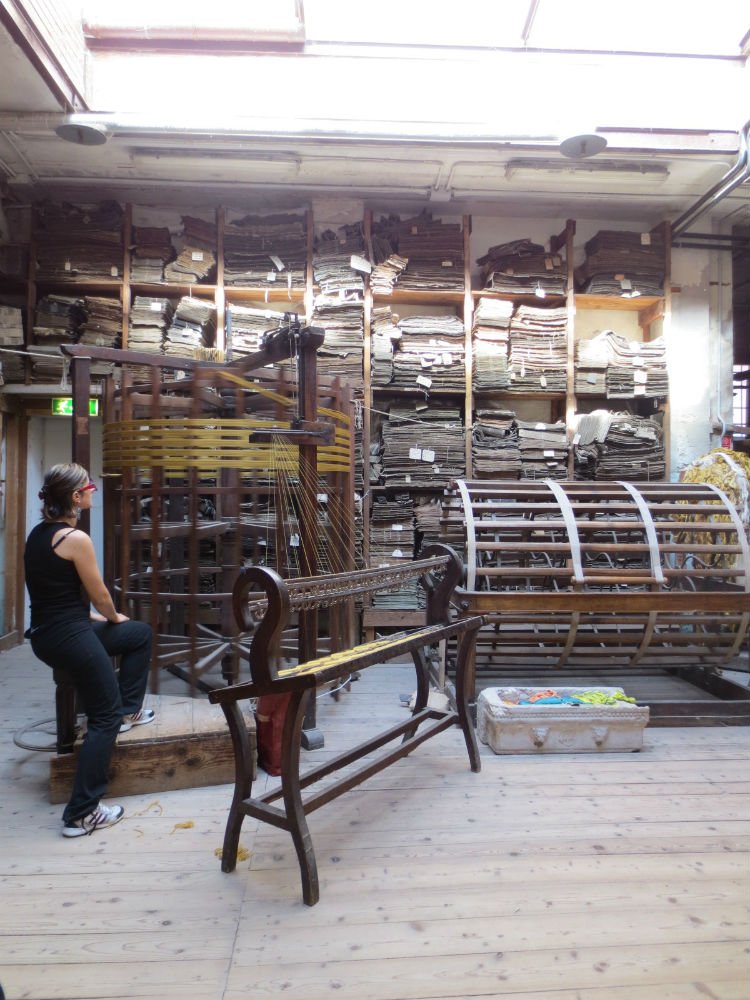 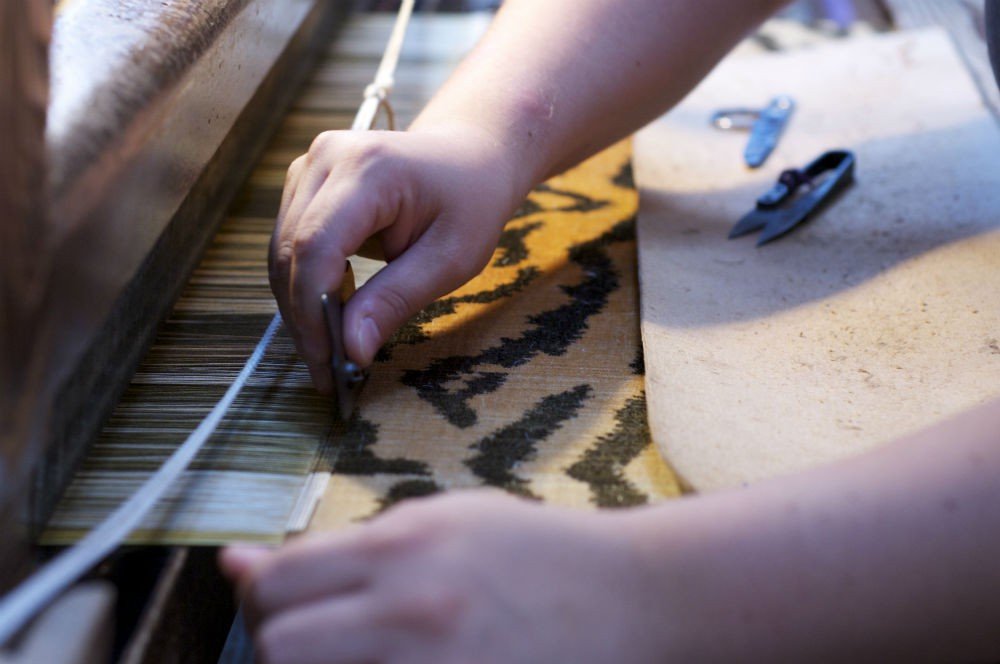 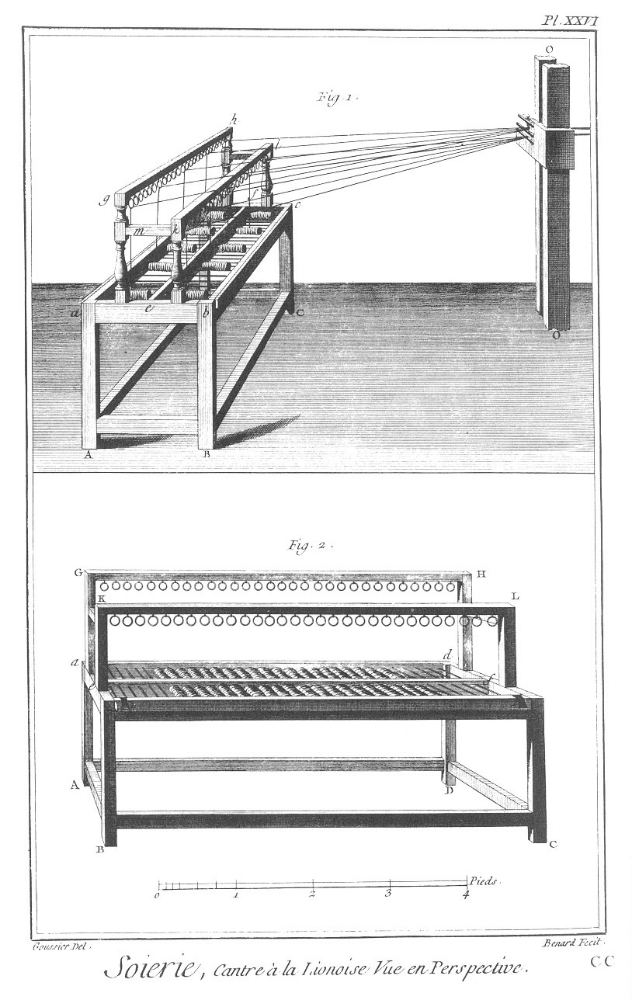 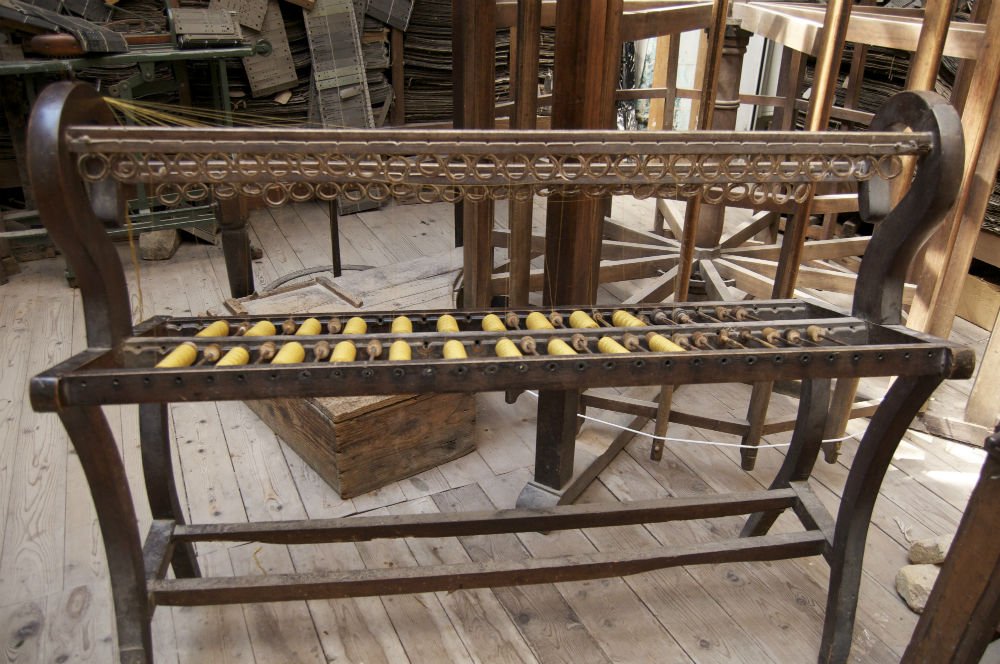 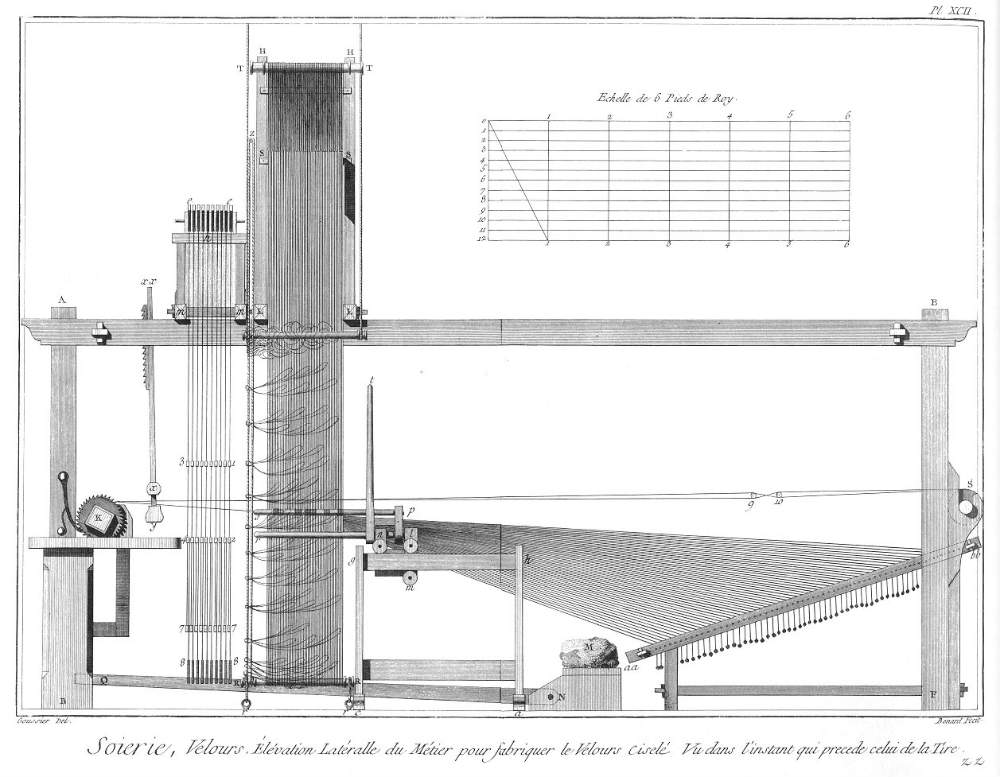 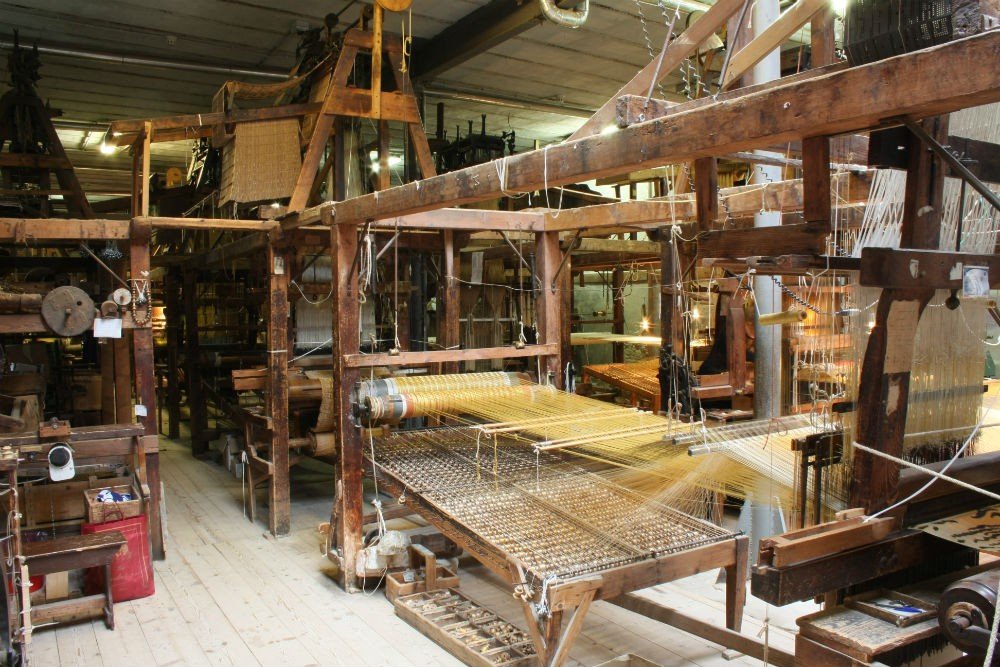 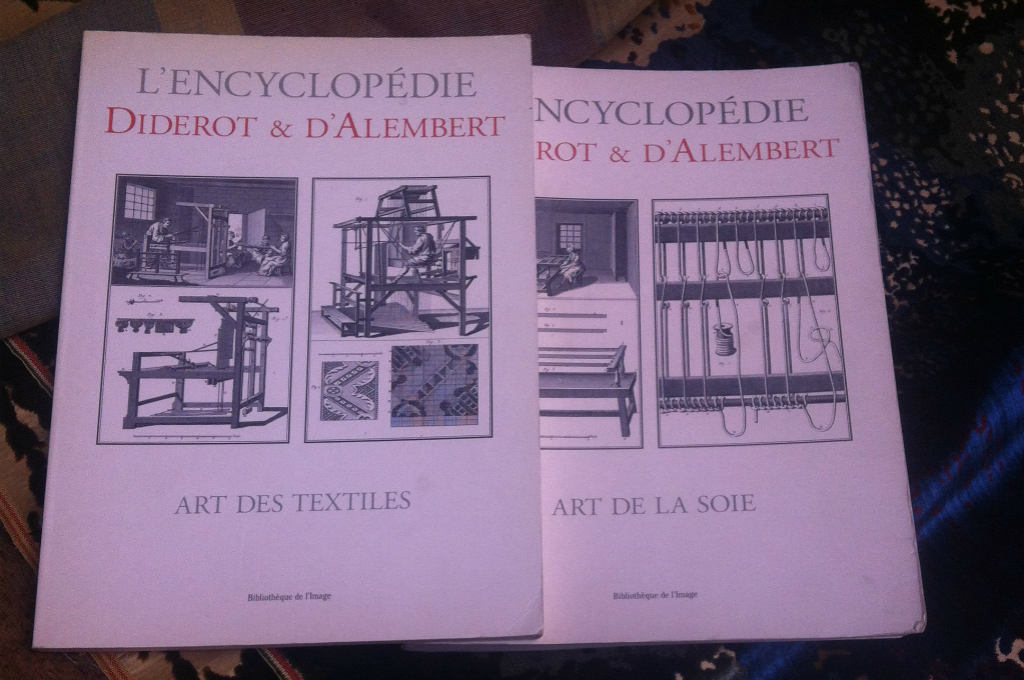