Velvets for Sacred Furnishings and Vestments 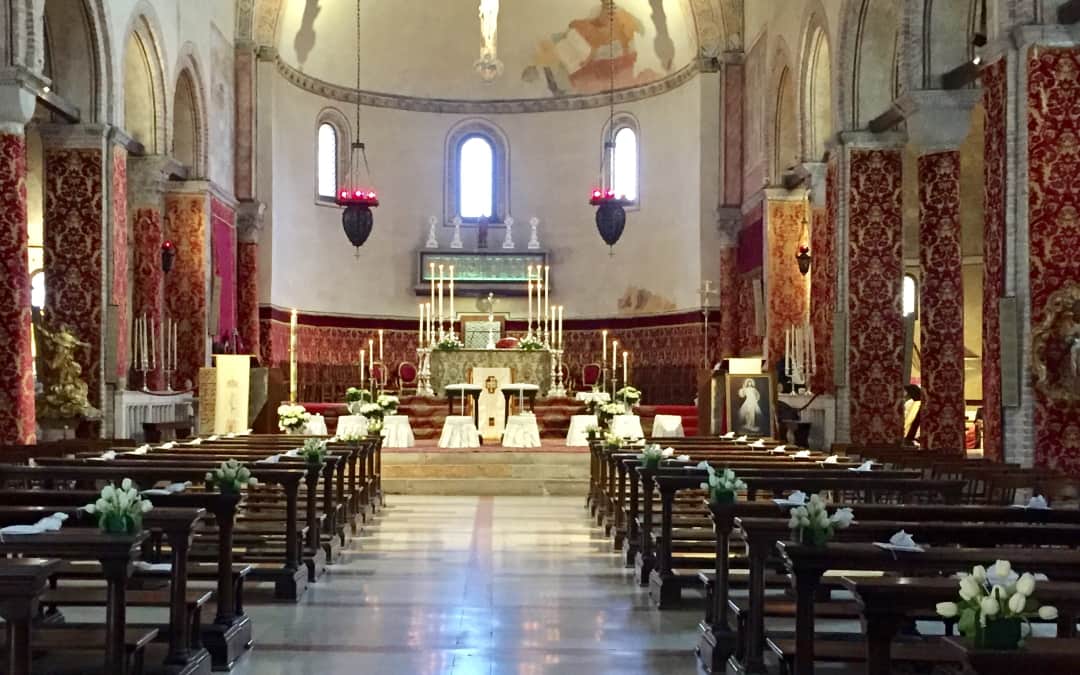 At the beginning of the 20th century, our Tessitura was awarded a series of important recognitions. Among these were the gold medal at the Brussels Universal Exposition in 1910 and the Grand Prize at the International Exposition of Turin in 1928.

As a result of these awards and the fame gained, fruitful collaborations were born with the Church for the supply of fabrics for both liturgical furnishings and vestments.

Churches, basilicas, convents, and the Vatican itself were embellished with velvets and other precious fabrics by Bevilacqua, to the extent that in 1953 we obtained the title of “papal supplier” from Pope Pius XII and, in 1959, from Pope John XXIII.

The iconographic motifs are taken from the past and often mixed in a so-called eclecticism of styles. Byzantine, Gothic, Renaissance, Baroque, and Neoclassical designs enter the sacred furnishings, including elements which are typical of early Christian symbolism. We still preserve, in our historical archive, samples of these fabrics, each one rich in history and beauty. 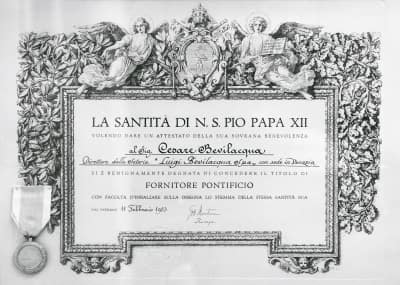 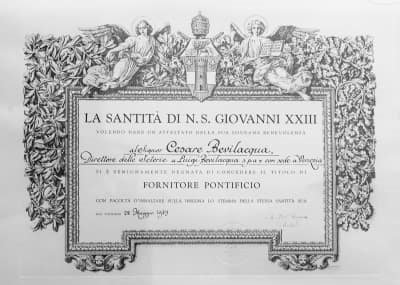 For the Benedictine monks of the Abbey of Praglia, in the environs of Padua, in 1934 we created a precious silk soprarizzo velvet in ivory color on a gold ground. The decoration, with a 16th-century compositional structure, is filled with traditional elements from the Eucharistic liturgy, harmoniously combined with the coats of arms that identify the patron:

A chasuble (the vestment worn by the religious man celebrating mass) made with this velvet was displayed at the International Exhibition of Sacred Art held in Rome in 1934. 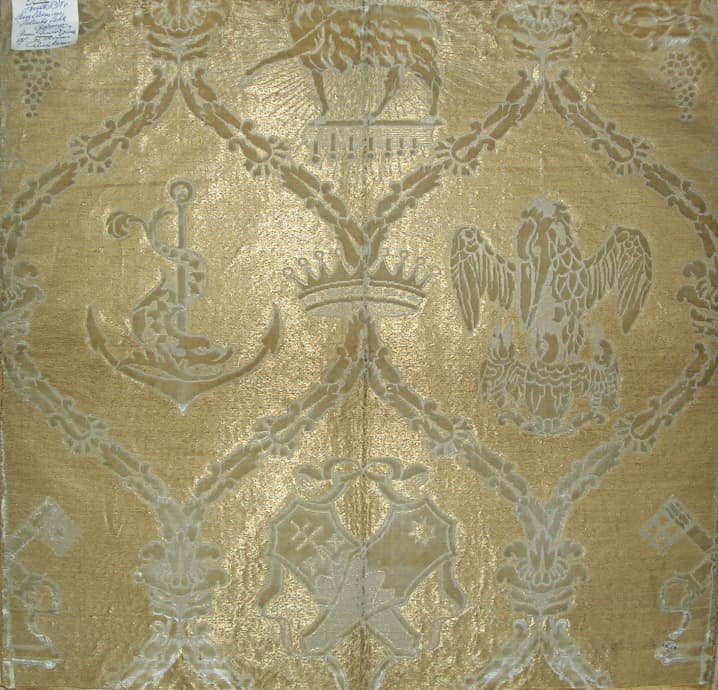 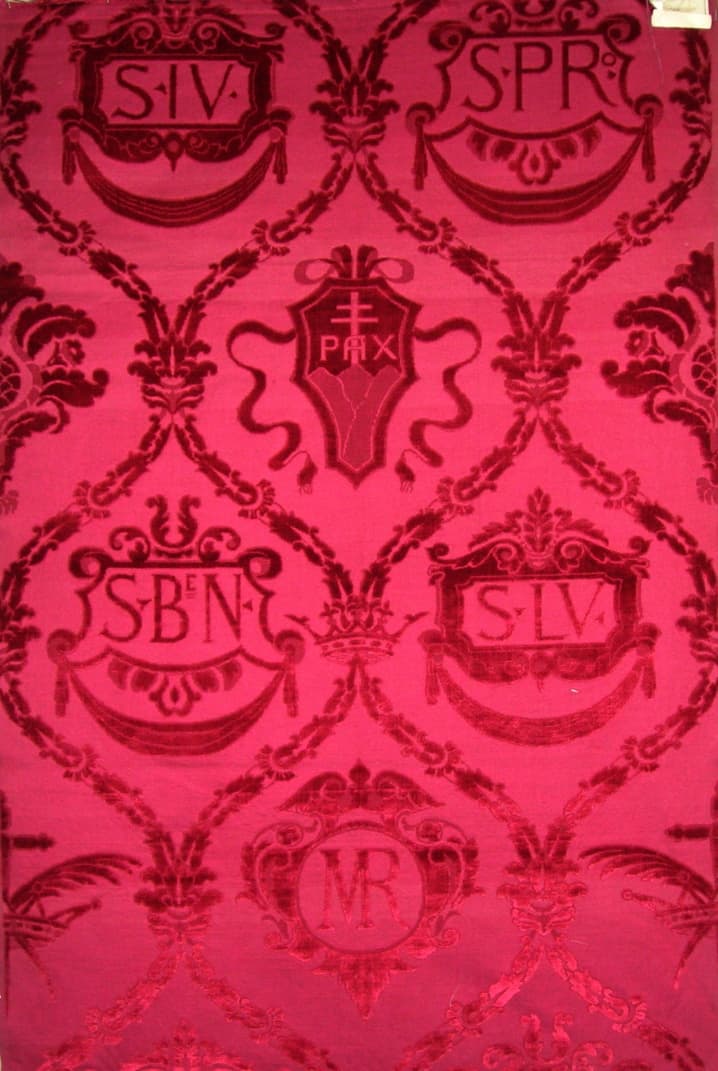 Soprarizzo Velvet for the Basilica of Santa Giustina in Padua

For the Benedictine monks of Santa Giustina church in Padua, is another soprarizzo velvet in crimson silk, created for the presbytery of the basilica in 1934. The mesh compositional structure, given by stems of leaves and pomegranate flowers, enclose the initials of saints venerated in the church. They appear as if carved in relief.

Thus we read the letters “S.IV” referring to St. Giustina, “S.PR⁰” for St. Prosdocimo and “S.LU”, St. Luke the Evangelist. Note also the initials of St. Benedict Abbot, “S.BeN”, founder of the order and the monogram MR, referring to Our Lady. You can also recognize the shield with the double cross, the three mountains and the inscription PAX, the symbol of the Benedictine order.

Vestments for the Greek Pontifical College

This soprarizzo velvet in olive green silk was commissioned for the vestments of the Greek Pontifical College of Rome in the 1930s. Heraldic and early Christian symbols are inserted on a circular structure, of Medieval inspiration.

Besides the lamb, a symbol of Christ, there is a Greek cross whose arms end with three acorns. Inside the smaller roundels, you can see the coat of arms of Pope Pius XII (1939-1958), who commissioned the fabric, with the papal tiara and keys.

As well as the Franciscan heraldic emblem, with two crossed arms from which stands a Latin cross. The naked arm belongs to Christ while the one dressed in a habit is St. Francis’s. Its meaning is the conformity of Saint Francis to Christ. In the spaces delimited by the circles we can see two doves feeding on bunches of grapes, an expression of the soul that has entered into God’s peace and participates in the eternal banquet. They are surrounded by branches, indicating the universal Church. 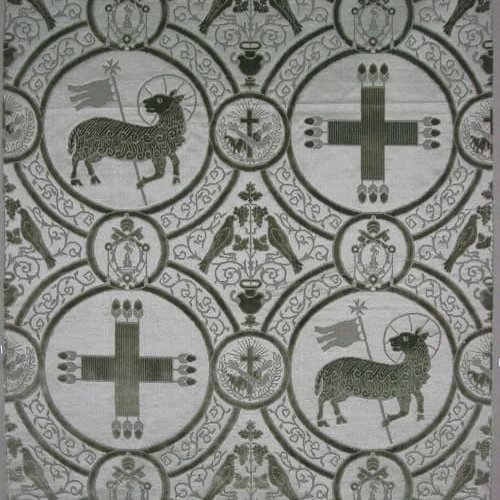 Other Precious Fabrics in the Churches of Venice

There are numerous other examples of fabrics created for the Church that can still be admired today. In Venice, the magnificent soprarizzo velvets of the basilica of the Madonna della Salute in red and gold with rococo floral motifs; the splendid multicolored velvets of the church of San Zulian, characterized by an explosion of naturalistic elements typical of the “Jardinière” motifs and the soprarizzo velvet with a giant sunflower of the church of Sant’Alvise.

The Cathedral of Caorle, a delightful coastal town in the province of Venice, also boasts handwoven velvets, made in the early 40s. It is the soprarizzo “Fioroni”, in shades of red and gold with floral elements of baroque inspiration, another example of Jardiniere pattern that spread in the 17th century, when weaving techniques allowed the creation of motifs extremely rich in details and colors and that today also adorn Italian churches. 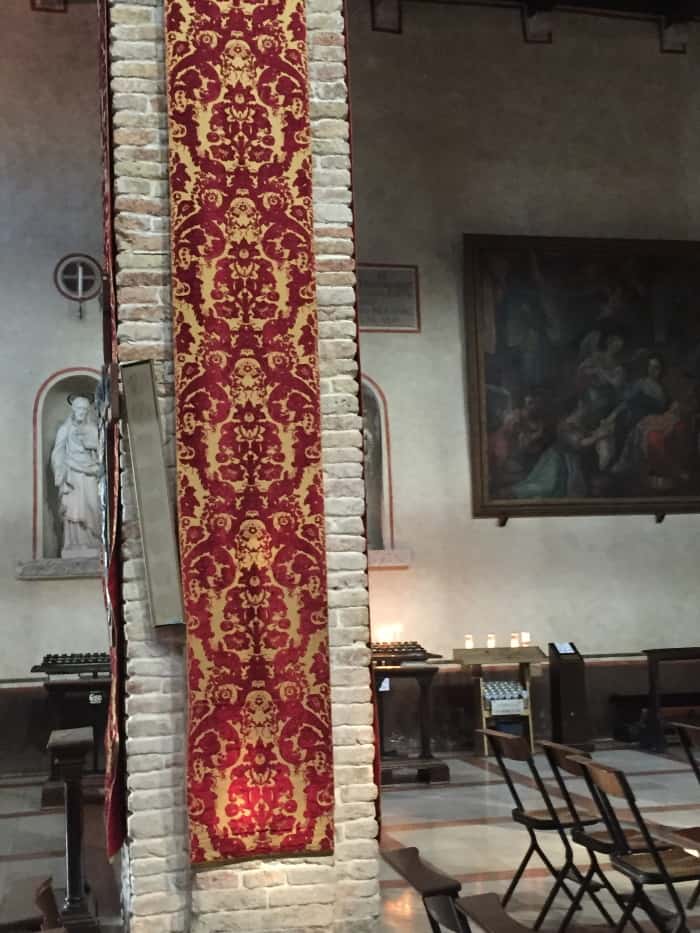 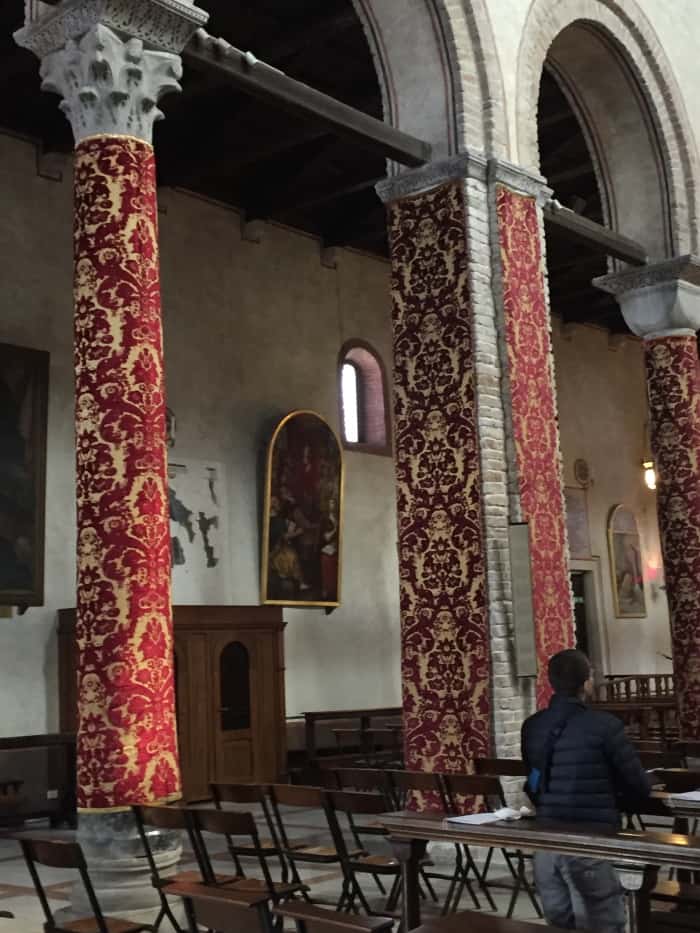 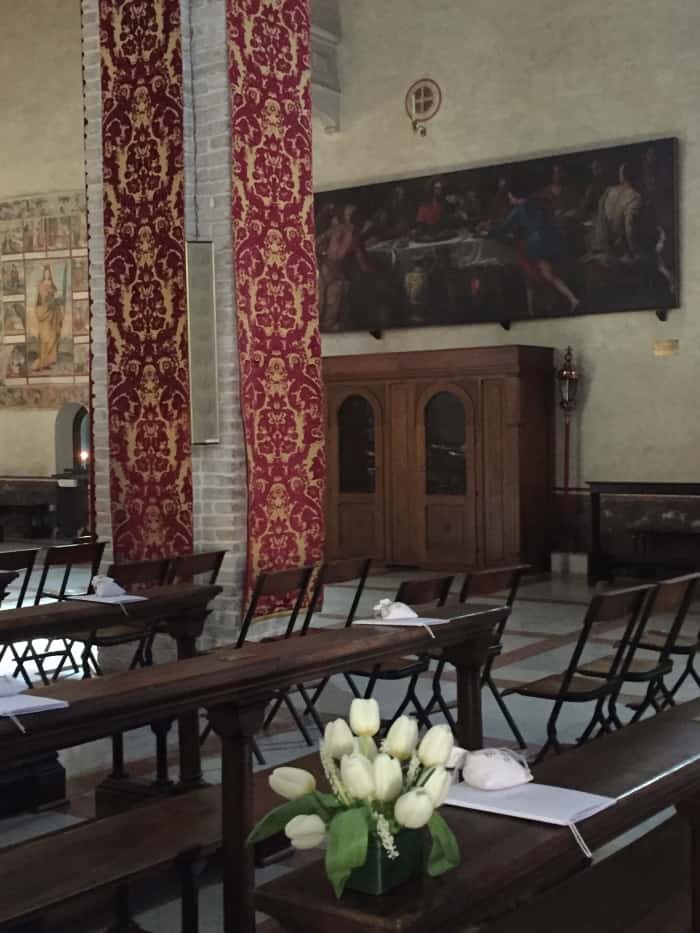