Treasures to be found: San Zulian 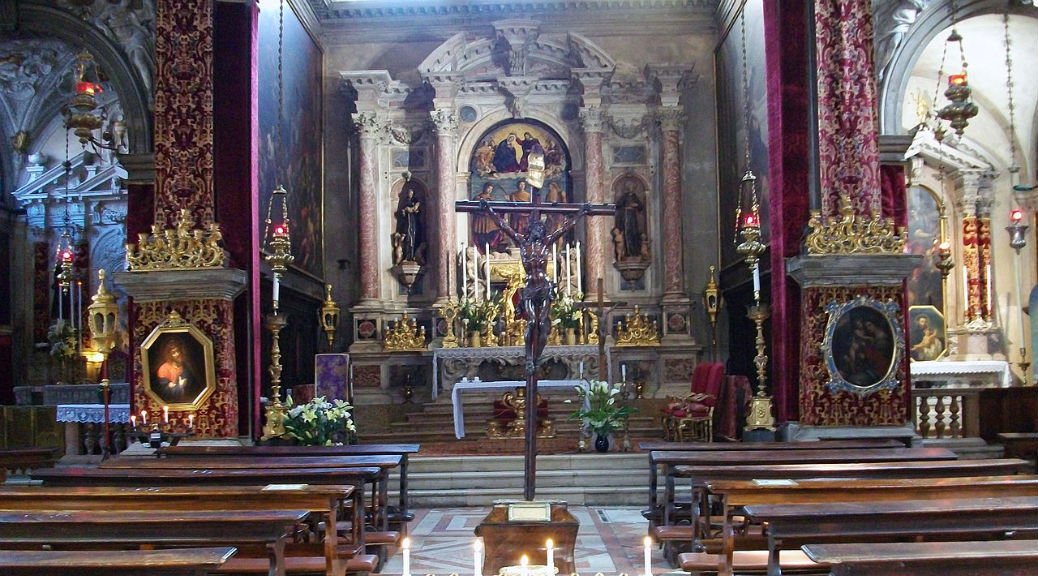 Maybe you’ve happened to end up in Saint Mark’s Square, after a walk through Venice, and to choose, as your way back, the Mercerie, under the Clock Tower. After a few steps, you’ll have got to the parish of San Salvador: but where’s its church? San Zulian, in fact, cannot be that easily stumbled onto, but rather discloses its white façade, otherwise hidden by other buildings, only to the most mindful eyes. And the luckiest ones, too.

The story of the church of San Zulian

On the only – catholic – church in Venice where mass is celebrated in English, Jacopo Sansovino and Alessandro Vittoria, a sculptor trained in his atelier, started working in the middle of the 16th century, thanks to the donations of craft guilds, brotherhoods and Tommaso Rangone.

That is the “Thomas of Ravenna, philosopher and physician” named on the inscription standing out on the façade. Who’s the very man sitting in the middle of the pediment, surrounded by the tools of his trades, as well. And if you accidentally missed the inscription over the fronton, don’t worry: those on each side of the door would remind you of the backer. In Greek and Hebrew.

Thanks to Rangone’s bounty, the architect of the Marciana Library could restore a church founded in 829, by renewing its façade and structure in 1553. Indeed, now the church’s got a square plan and just one nave. Right opposite to the entrance you can therefore see the high altar, with the Coronation of the Virgin altarpiece and the pillars of the presbytery. Upholstered with Bevilacqua’s handwoven velvets.

How comes this fabric has been surely identified, even though the documents on San Zulian’s fabrics are lost and gone? By relying on oral sources and by drawing a comparison with other giardino velvets.

The soprarizzo velvet used, in different colours, in the church of San Zulian, Venice.

The luxury fabric for upholstery definitely shows a giardino motif, which was created in Genua in the 18th century. The design is betrayed by the basket full of leaves and flowers in the middle of the pattern, framed by curvilinear stems and lashings of fruit. Berries, grapes and quinces alternate with roses, gillyflowers, lilies and many more flowers, in a picture bursting with life and nature. This fabric by Bevilacqua, though, does not date back to the 18th century, but rather to 1939.

The church dedicated to Saint Julian, Martyr, is therefore one of Venice’s treasures worth discovering. And, like all treasures, finding it is sort of a challenge.