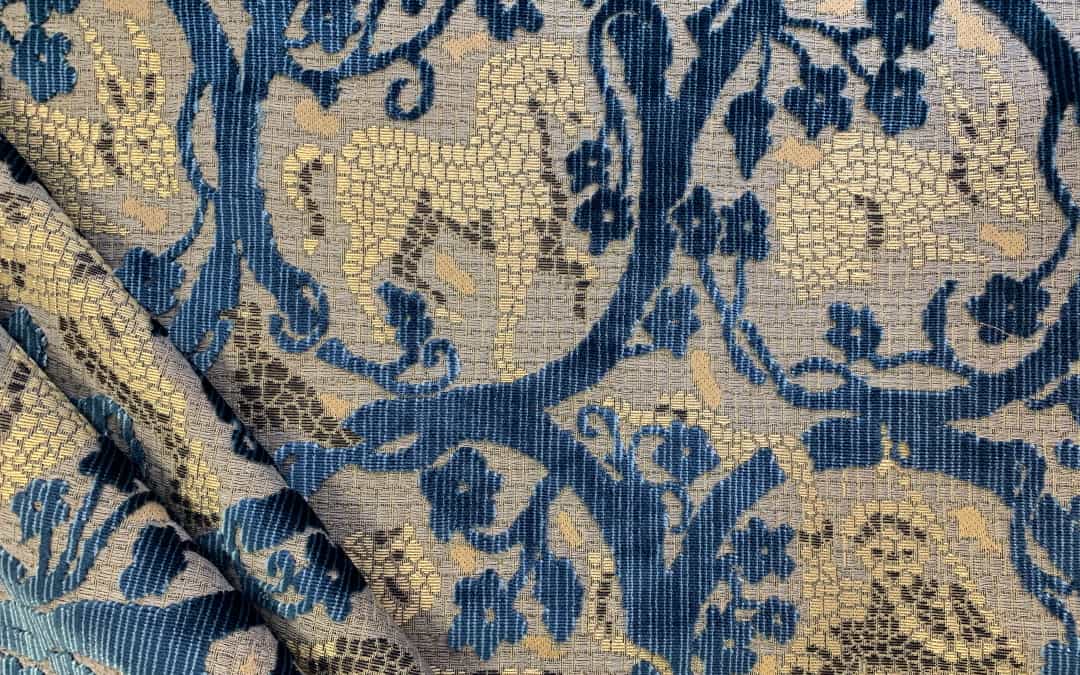 A masterpiece of Byzantine art, the mosaic depicting Emperor Justinian I in the Basilica of San Vitale in Ravenna, inspired our Mosaico heddle velvet. Let’s discover its characteristics and history.

The Pattern of Mosaico Velvet

Mosaico velvet is a heddle velvet whose refined design is inspired by ancient Roman mosaics of the late Imperial Age. The grid that characterizes it recalls the tesserae of a mosaic with a checkered background on which vine shoots intertwine with leaves, bunches of grapes, and tendrils creating medallions that enclose some figures. We can recognize a wolf, a bull, a goose, a dog, a leopard, a horse, a ram, a rabbit, and small birds perched on the branches. The only human figure is that of a gladiator, with a spear in his hand and in the act of whirling a long net. A motif that recalls a famous work of early Christian and Byzantine art: the mosaic of Justinian and his entourage in the church of San Vitale in Ravenna. 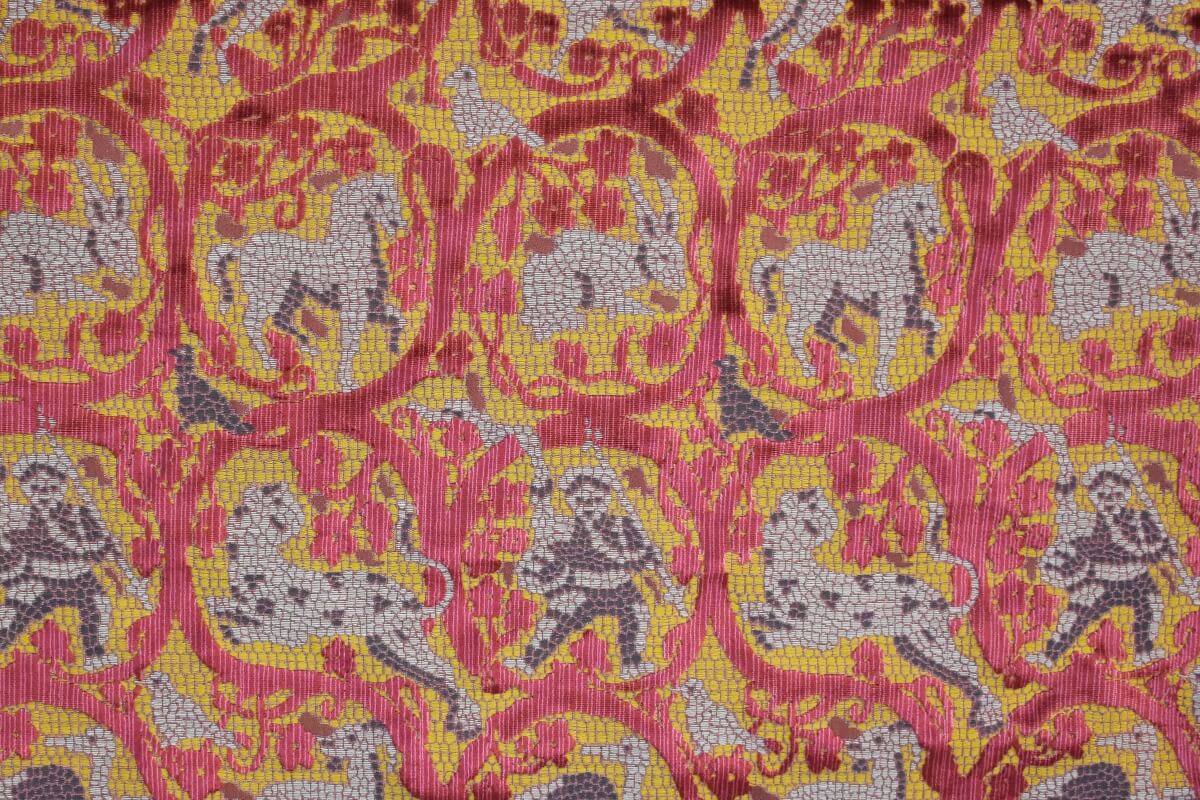 Ravenna was an important political and cultural center of ancient Italy, the first capital of the Western Roman Empire from 402 to 476 and later the seat of the protectorate of the Eastern Empire in Italy under Emperor Justinian I. During this period, there was a strong impetus for religious architecture and the figurative arts, of which the Basilica of San Vitale is a magnificent example. This was completed in 547, and inside we can admire the beautiful mosaics, masterpieces of Byzantine art. The most famous of these depicts Emperor Justinian with his court. It is his rich dress that captures our attention, particularly his golden tablion. It represented an extension of the cloak and had a specific social function: the preciousness of its embroidery and its jewels indicated the wealth and social rank of the person wearing it. And the refined embroidery of green parakeets, inscribed in a red circle on a gold background, was worthy of an emperor and a motif reminiscent of our Mosaico velvet. 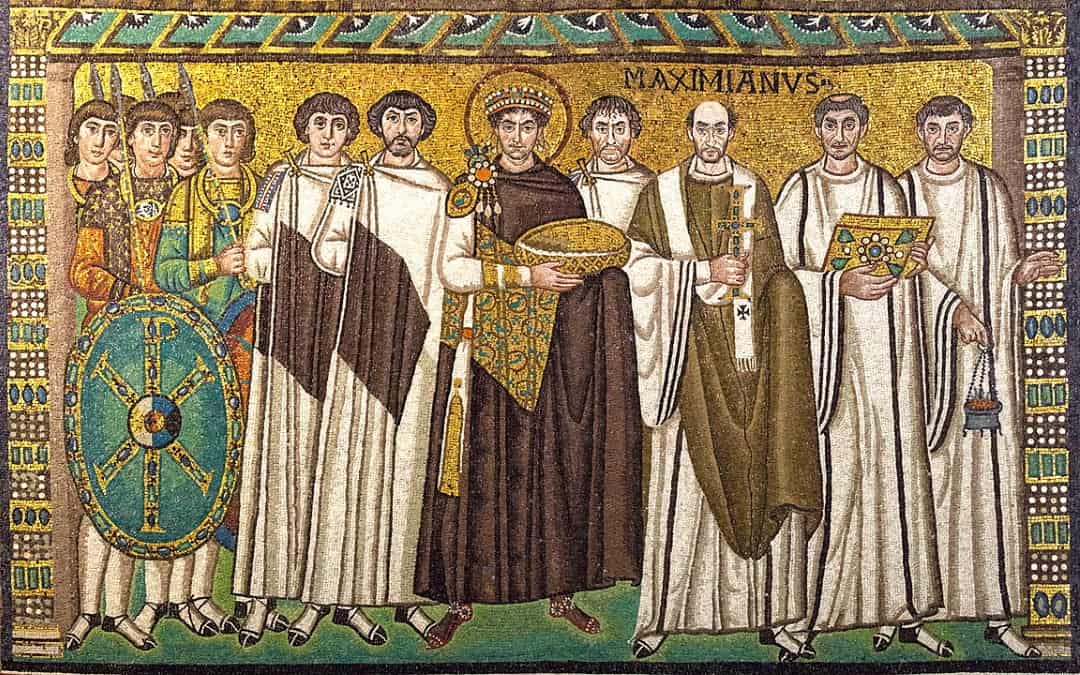 Mosaic of Justinian I in San Vitale 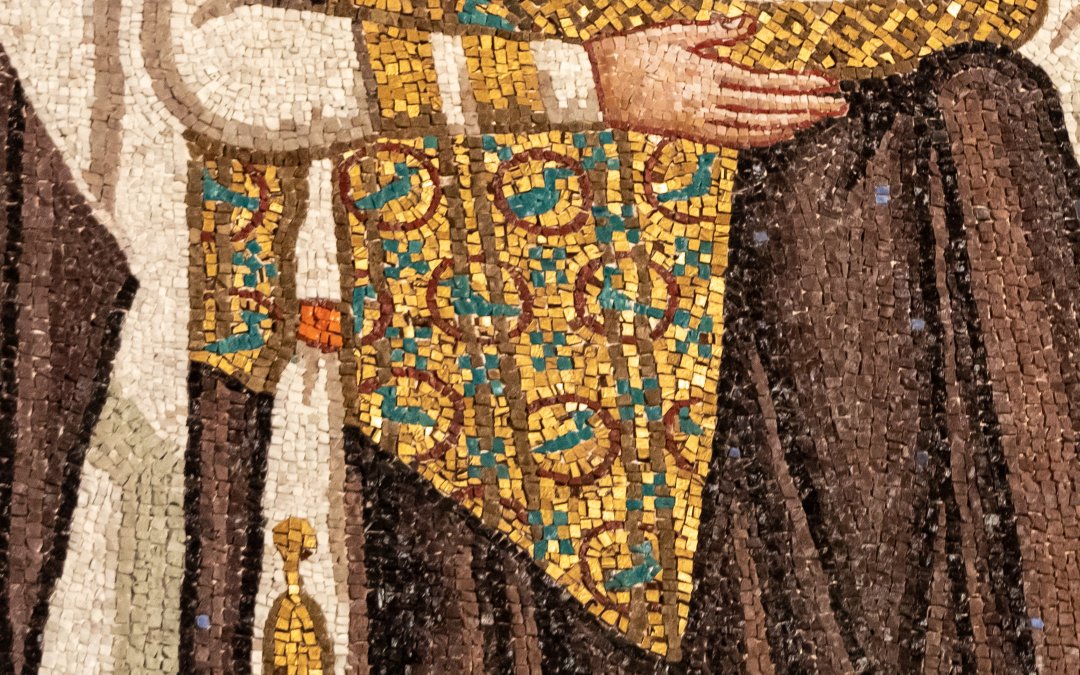 Detail of Justinian I mosaic

Mosaico Lancé heddle velvet is woven in silk with a smaller percentage of cotton and cupro and is made in Italy. A piece of fabric has a height of 130 cm and a ratio of 56 cm. It can be used for upholstery, furniture, and home accessories. The different color variations in which it is offered are listed below. 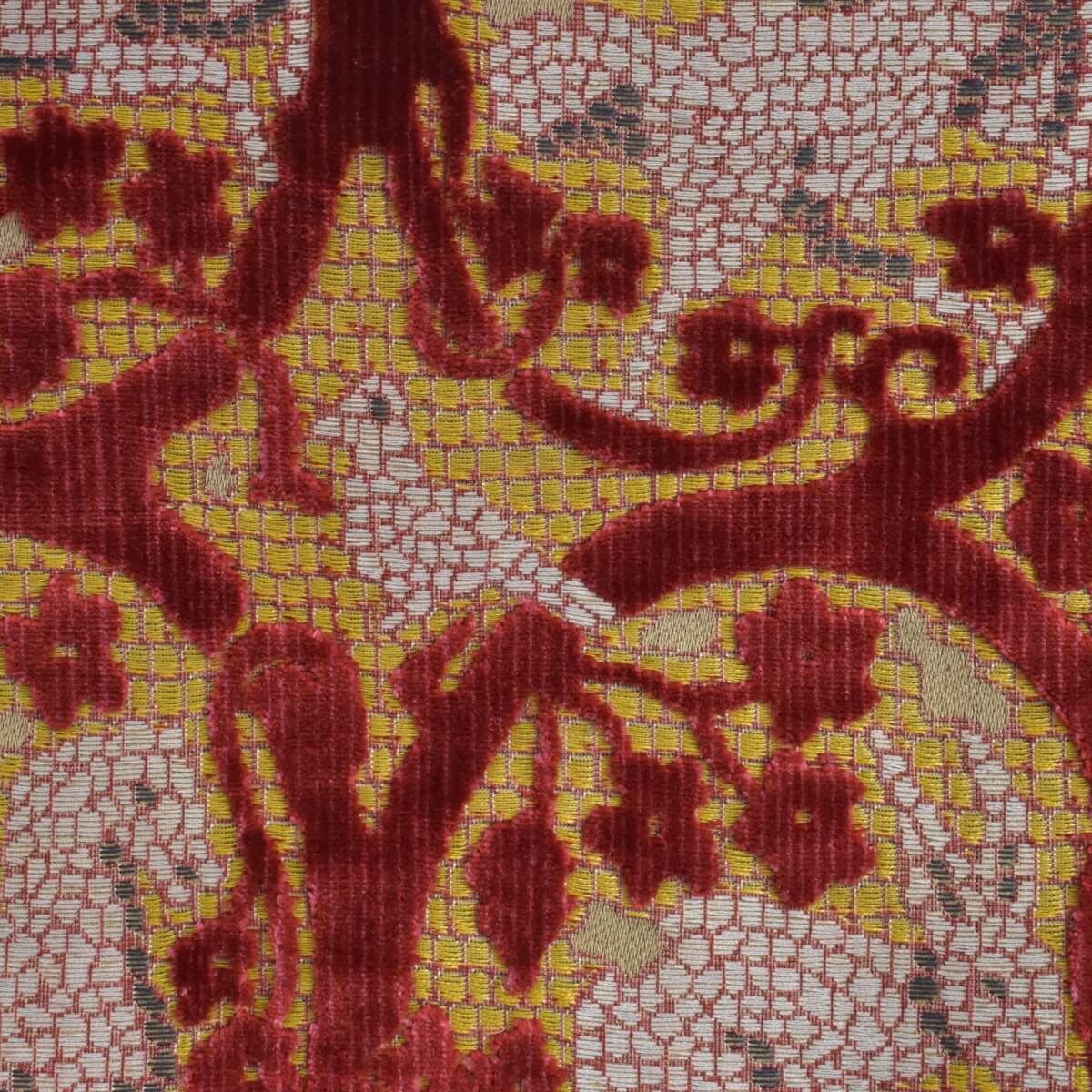 On a yellow background, stand out the volutes of vines in red while the figures of animals are in neutral shades of white and taupe. Code: 400/3587S 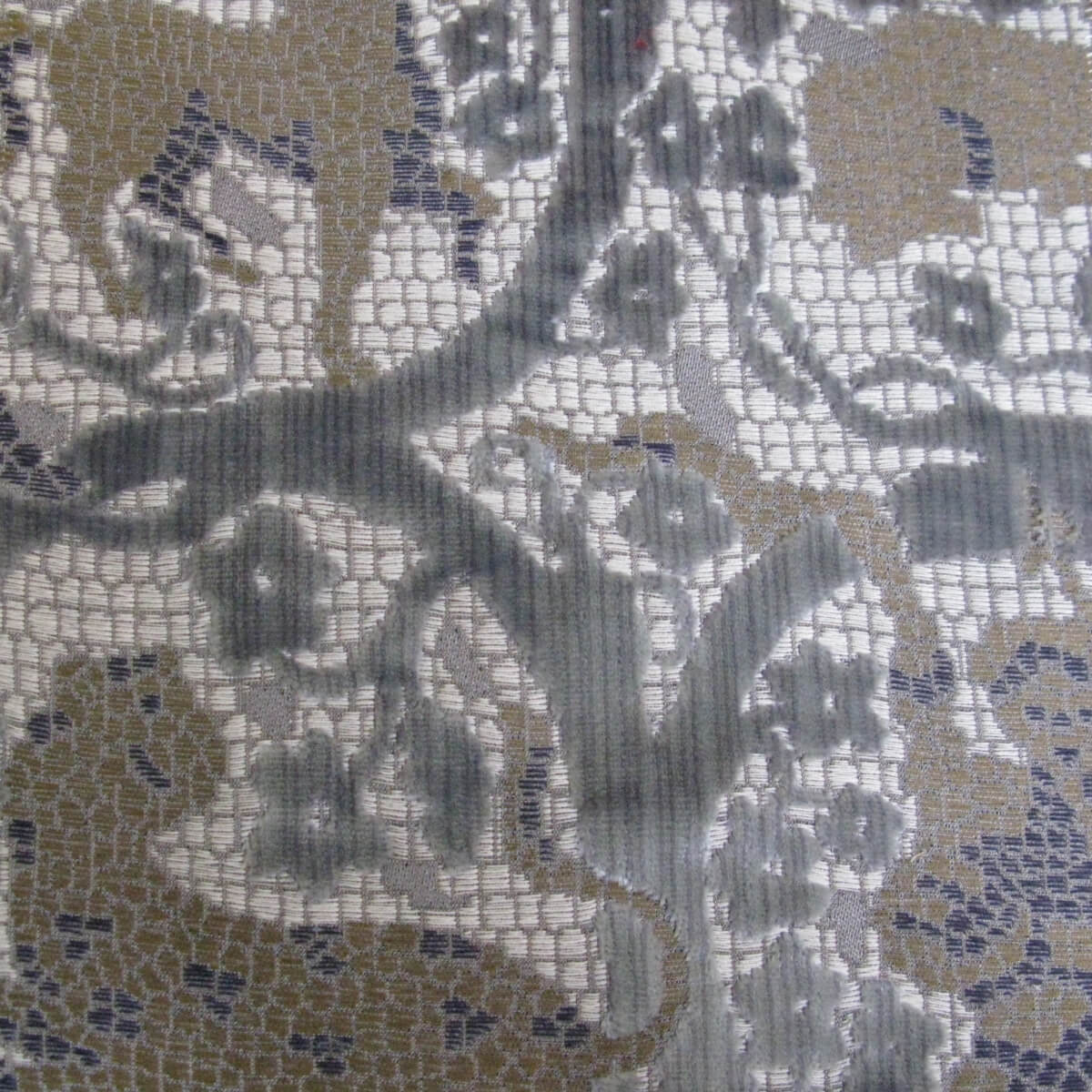 The background is white with branches in gray and figures in ocher with details in blue. Code: 401/3587S 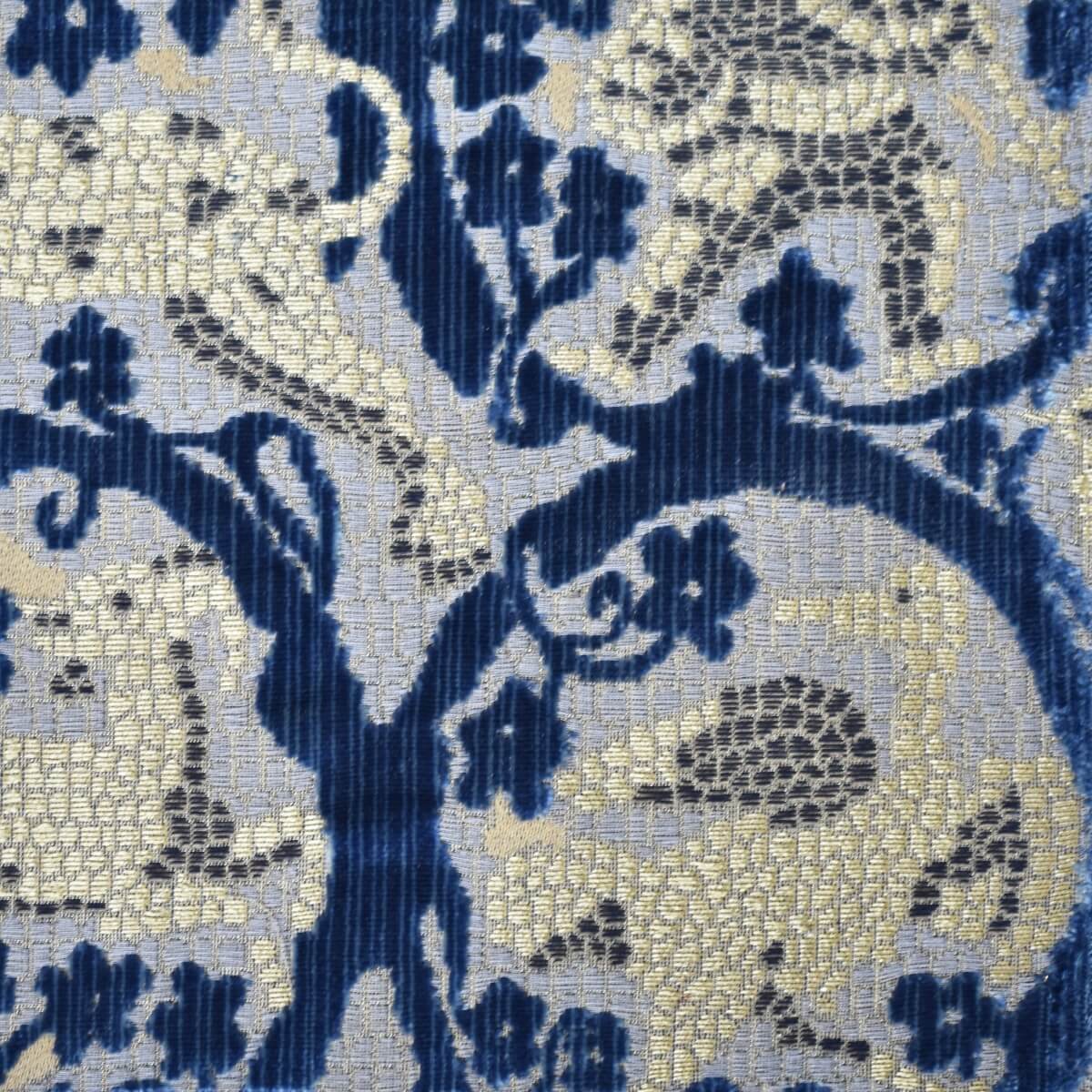 The background is light blue with vines in dark blue and animal figures in champagne color with details in dark gray. Code: 407/3587S 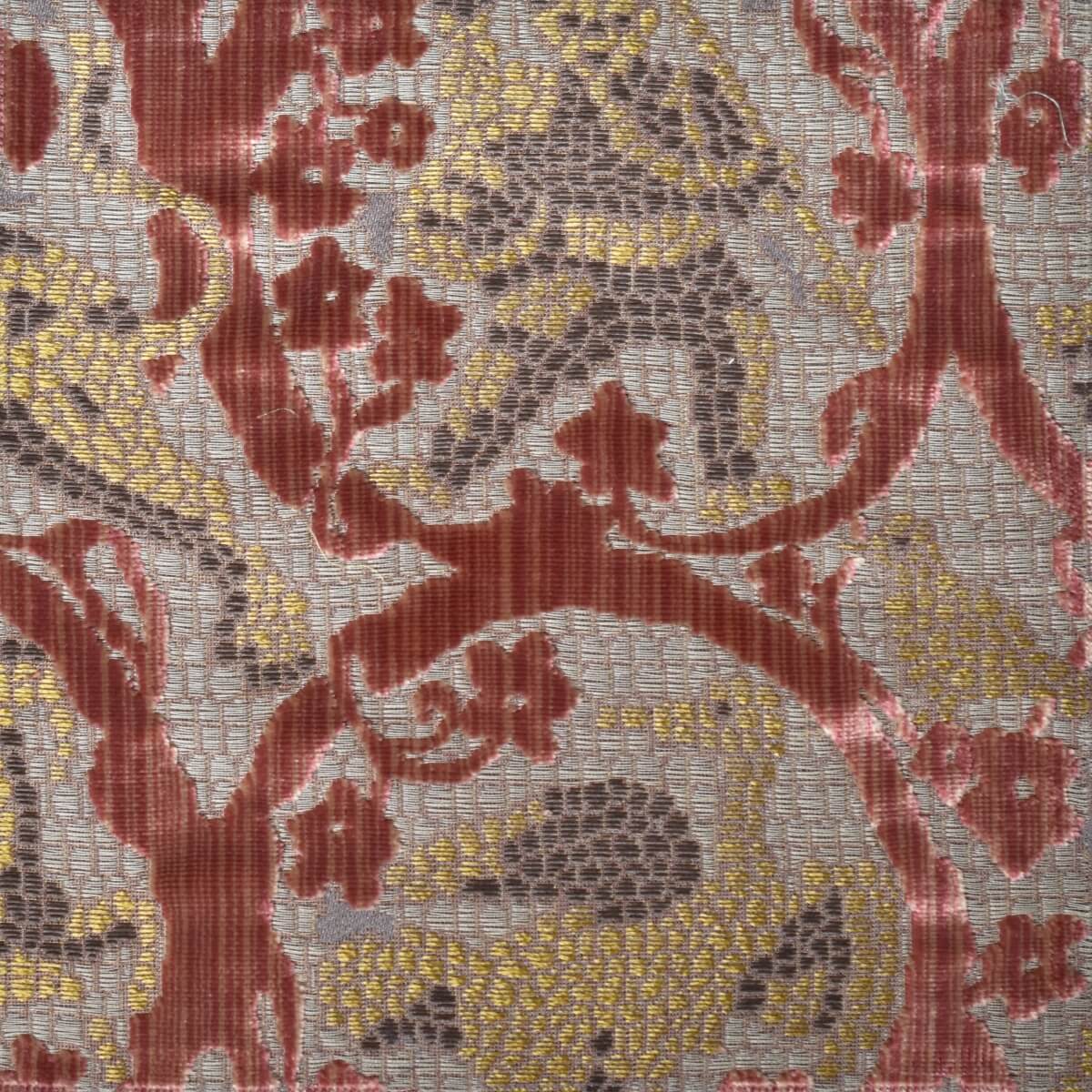 On the grey background, stand out the branches in antique pink and the animal figures in golden yellow with taupe details. Code: 408/3587S

In the same fabric, in the red multicolor version, is also available the precious Mosaico Velvet Cushion, lined and trimmed with marabou fringe. 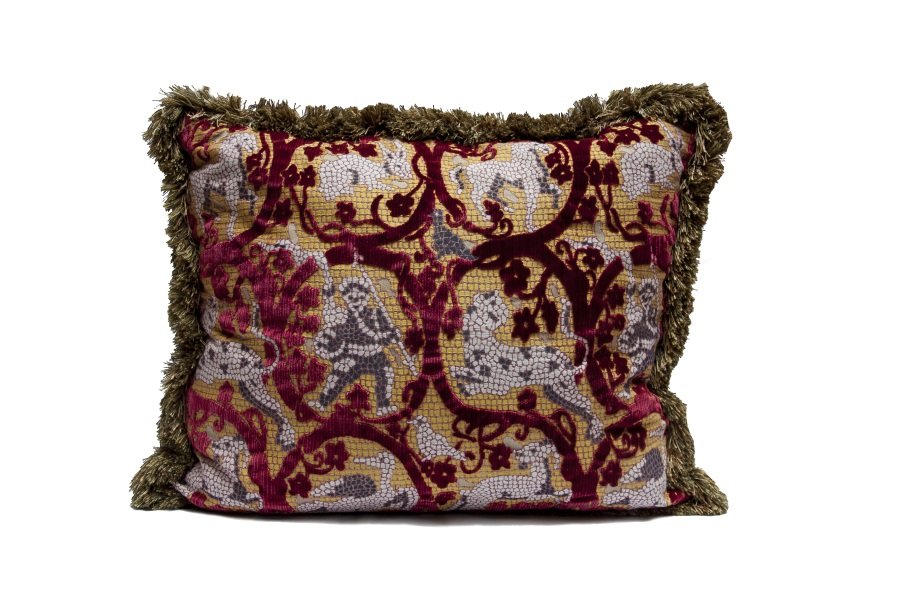