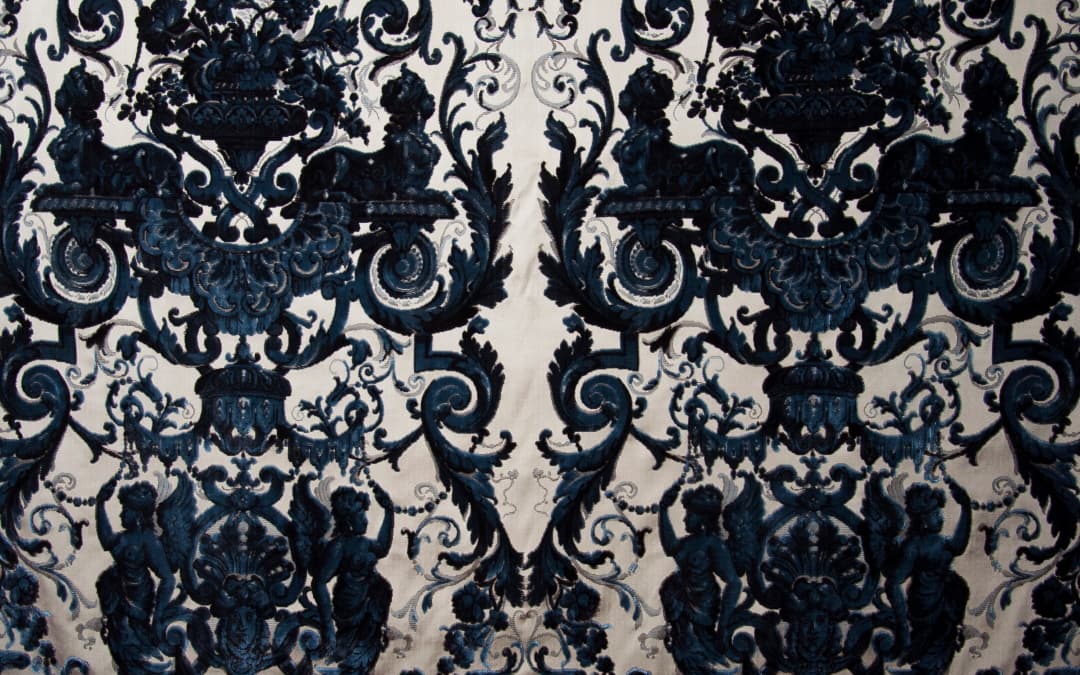 Sometimes it’s not easy to determine the origin of fabric patterns, but for some of them we can be absolutely certain. The “grotesque” decorations are just one of these cases. They adorned baroque, rococo and neoclassical fabrics, but their history began long before that, more precisely at the time of the Roman Empire.

The Origin of Grotesque Decorations

In 1480 a young man accidentally fell through a cleft in the ground on the Esquiline hillside in Rome. He found himself inside a cave and noticed that its walls were decorated with unusual colorful paintings showing monsters, chimeras and sphinxes.

These frescoes immediately aroused great enthusiasm among the Roman artists who came to admire them and remained fascinated. They went down into the cave to observe these wonders, study the compositional elements and then reproduced them in their works. Hence why the name “grotesque”: because they were found in grottoes.

As a matter of fact, those were not caves, but rather the underground remains of Nero’s Domus Aurea. By now, however, the news of this discovery and the term “grotesque” had already quickly spread among the artists of the time who embraced this particular decorative style. 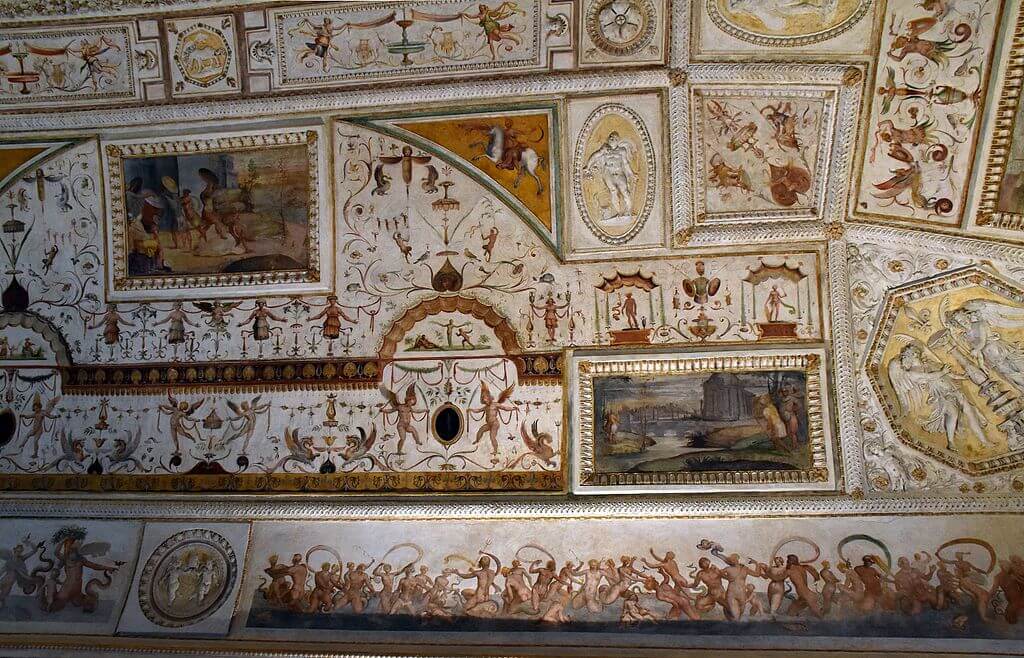 The grotesques in the Library of Castel Sant’Angelo, Rome, painted by Luzio Luzi and inspired by the frescoes of the Domus Aurea.

In line with the Renaissance trend of re-proposing decorative styles inspired by classical antiquity, grotesques became very popular in cultured circles and were reproduced in Renaissance palaces of nobles and popes. Characteristic are the bright colors, thin outlines, fanciful creatures, natural elements such as garlands and a plain background, often white. All arranged in perfect symmetry.

They spread from Rome to Florence, Bologna, Siena and later to France, Spain and England. Among the artists of the time who contributed to their success are Pinturicchio, Botticelli, Filippino Lippi and, above all, Raffaello and his workshop.

Their works then developed from mere copies of Roman frescoes and became interpretations of the classic subjects of the grotesques, inserting new elements inspired above all by the animal and vegetable world. Moreover, they used them not only for paintings of vaults and walls, but also to embellish furniture, furnishings, fixtures and furnishing fabrics: curtains and tapestries.

From Frescoes to Baroque Patterns for Fabrics

From Baroque to Neoclassicism and up to the Victorian age: grotesque decorations remained popular until the 19th century, but following the rules of different artistic currents.

Our “Grotesque” pattern, which takes up this theme, dates back to the late 1800s, when there was a vogue for style mixtures. That’s why it features elements from the 16th, 17th and 18th centuries.

Typical of the 16th century are the sphinxes, the winged women and the head placed between them. It has a shell-shaped ornament on its top, typical of the Rocaille style.

In Baroque style are the canopy above the rocaille and the shelves on which the sphinxes sit: in fact, their volutes, curved lines and elaborate structure resemble Baroque architecture.

Not only that, Rococo is also present in the naturalistic elements such as the opulent composition of flowers in the vase and the garlands.

We chose this pattern for some of our fabrics: soprarizzo velvet, multicolored velvet, damask and brocatelle.

In the Grottesche soprarizzo velvet, which is the most complex and precious of our velvets, the great richness of shapes and details is made with a manual loom. A complexity that has become a challenge to make an equally prestigious fabric with a similar pattern, chosen to be part of the furniture of the Kremlin. 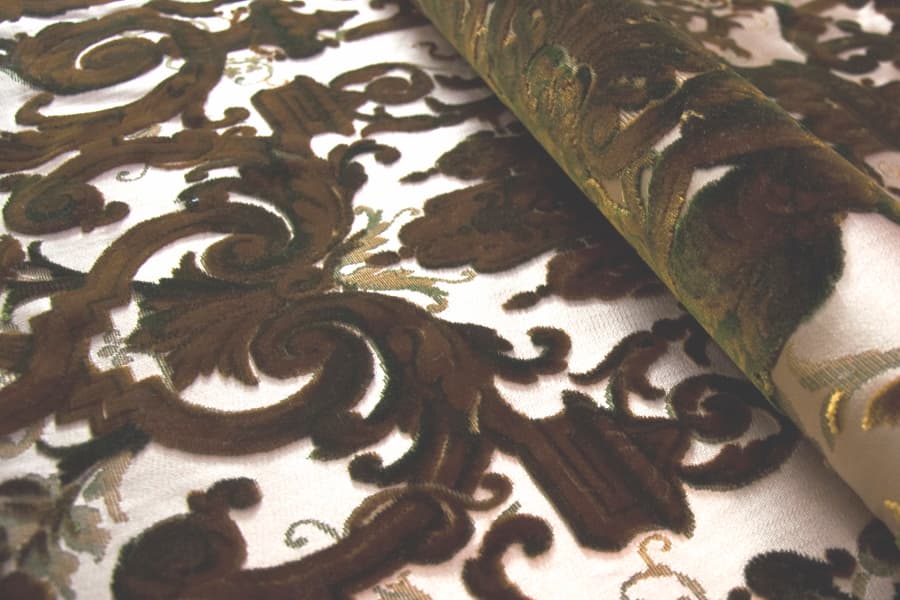 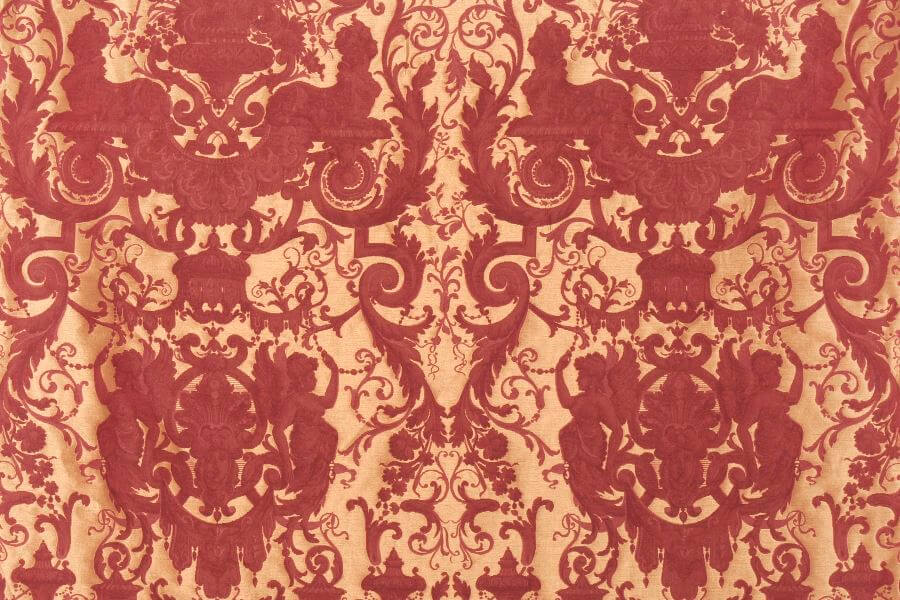