The Splendor of 16th-Century Venice in a Gondola 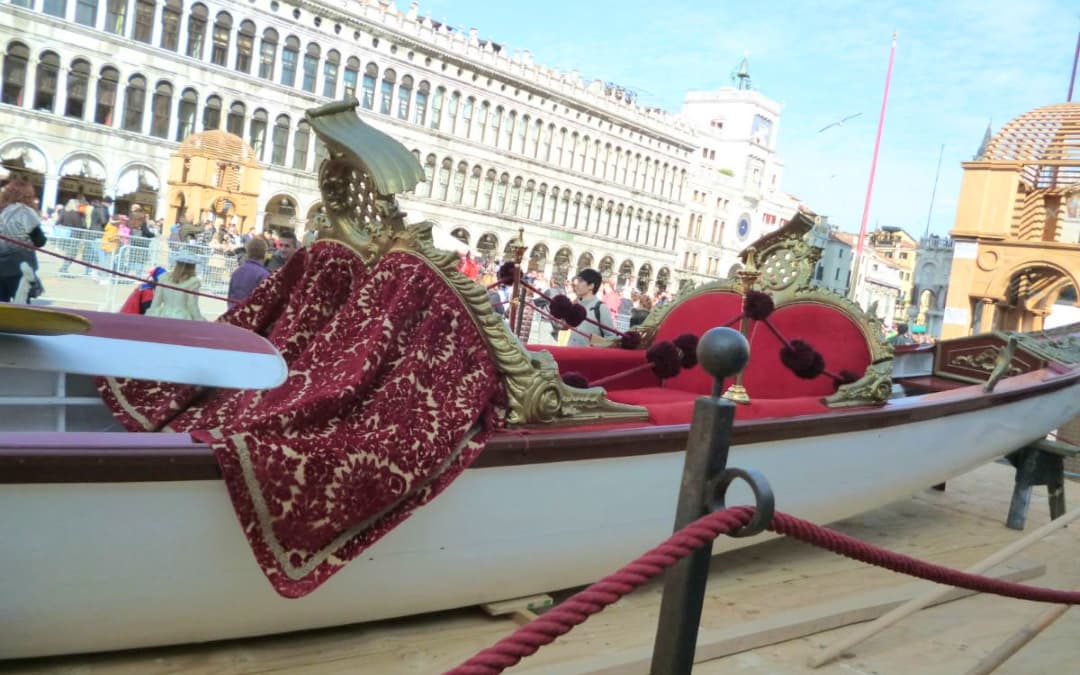 We present the limousine of Venice: the Dogaressa. It’s a gondola, but a very special one, starting with the white color of its hull. A sumptuous boat – reserved to accompany the illustrious guests who visit the city – which has been restored with the help of many Venetian craftsmen, including Tessitura Bevilacqua.

The history of the Dogaressa, Venice’s parade gondola

The Dogaressa owes its name to the wife of the Doge, who held the highest political office in the Republic of the Serenissima. It was built in the 1960s in the Cooperative D. Manin shipyard by Giovanni Giuponi and is inspired by the 18th -century parade gondolas of foreign ambassadors.

These boats were particularly sumptuous, rich in golden decorations, adorned with precious red fabrics, and painted in flashy colors, different from the standard black of the other gondolas.

The black color was imposed by the Venetian Senate since the 17th century, to set a limit to the excesses of the Venetian nobles in the decoration of their gondolas. These boats, on which moved prominent figures of Venetian life, were a means to express the power and wealth of a family and, for this reason the nobles, over time, had made them more and more luxurious and showy.

But foreign ambassadors, untouched by Venetian legislation, had continued to decorate their parade gondolas as they wished. As can be seen in the painting The Arrival of the French Ambassador in Venice by Canaletto, these had precious inlays, bright colors, and gilding. 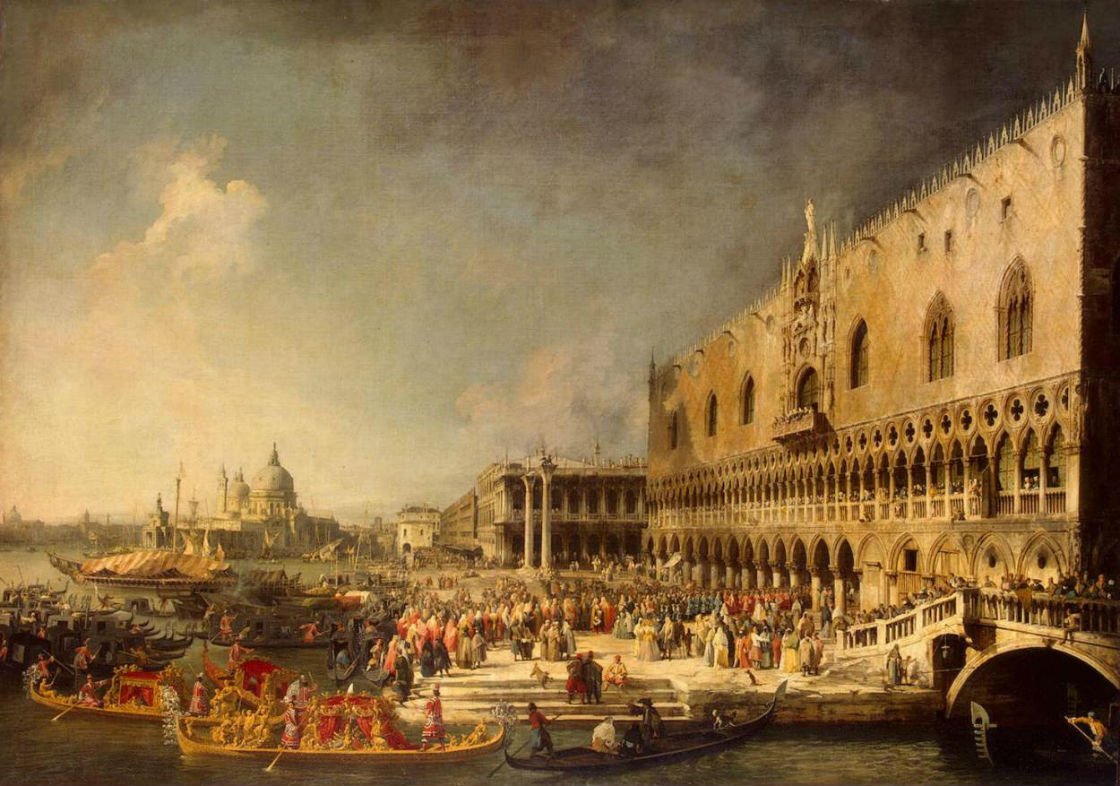 Canaletto – The Arrival of the French Ambassador in Venice

The White Dogaressa is not a simple boat, but it’s a symbol. It embodies the history of Venice and every single part of it is a piece of this centuries-old past. That’s because not only is there a historical meaning in its shapes, in its colors, and in the use of certain materials, but also because each component is the result of the work of Venetian craftsmen who operate with ancient techniques and pass on traditions that are lost in the centuries.

Today, the White Dogaressa is used not only to transport famous people visiting the city (including three popes), but it’s also possible to see it in one of the most special occasions for Venice: the Regata Storica (Historical Regatta) which is a historical commemoration and a sporting event with boat competitions held every first Sunday of September.

This Regatta of ancient origins opens with the Historical Parade which passes along the Grand Canal. It is a faithful reconstruction of the city’s glorious past with dozens of typical 16th-century rowing boats, sumptuously decorated, carrying people in period costumes. They represent the highest offices of the Serenissima and the White Dogaressa welcomes the Doge and his consort. 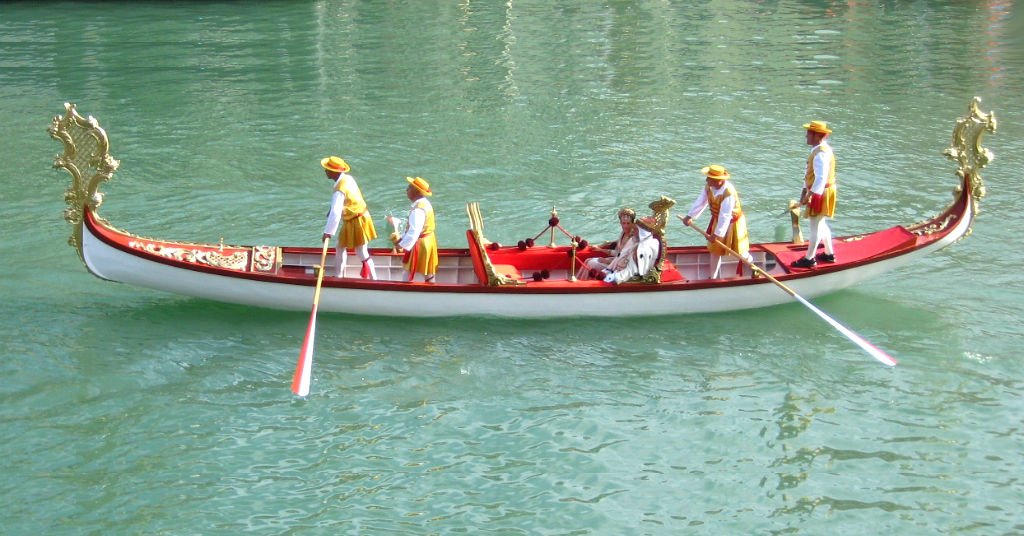 The White Dogaressa and the Doge at the Venice “Regata Storica”

The restoration by artisans and the Venetian fabrics of the Dogaressa

The Dogaressa is therefore a special gondola, which differs from all the others that parade along the Venetian canals for its color, but also for:

As told by El Felze, the association that took care of its restoration on the occasion of Carnival 2017, various Venetian artisans contributed to bring back the splendor of this boat.

Among them, also our Tessitura. We have produced the fabric for the decorations and cushions of this gondola: the Ardis velvet, in red color, i.e. the color of the clothes of the great offices of the Republic of Venice, with the same pattern used during that age. 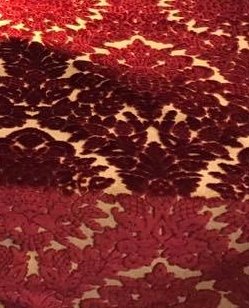 We are proud to have contributed to making the White Dogaressa even more beautiful with our fabrics, confirming the deep bond that connects our Tessitura with the history and traditions of Venice. 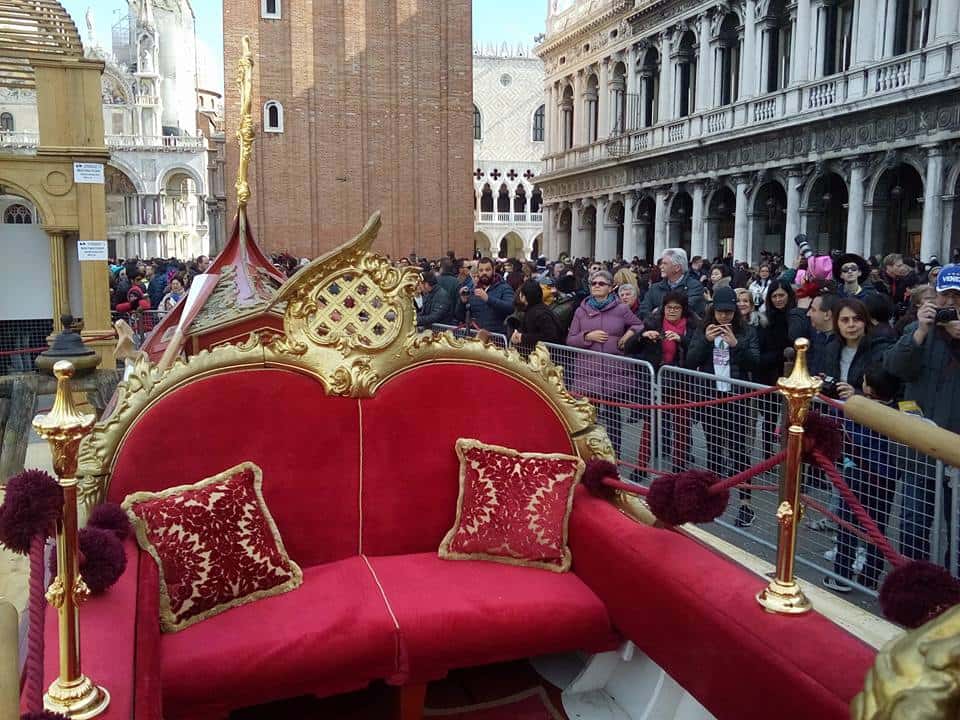 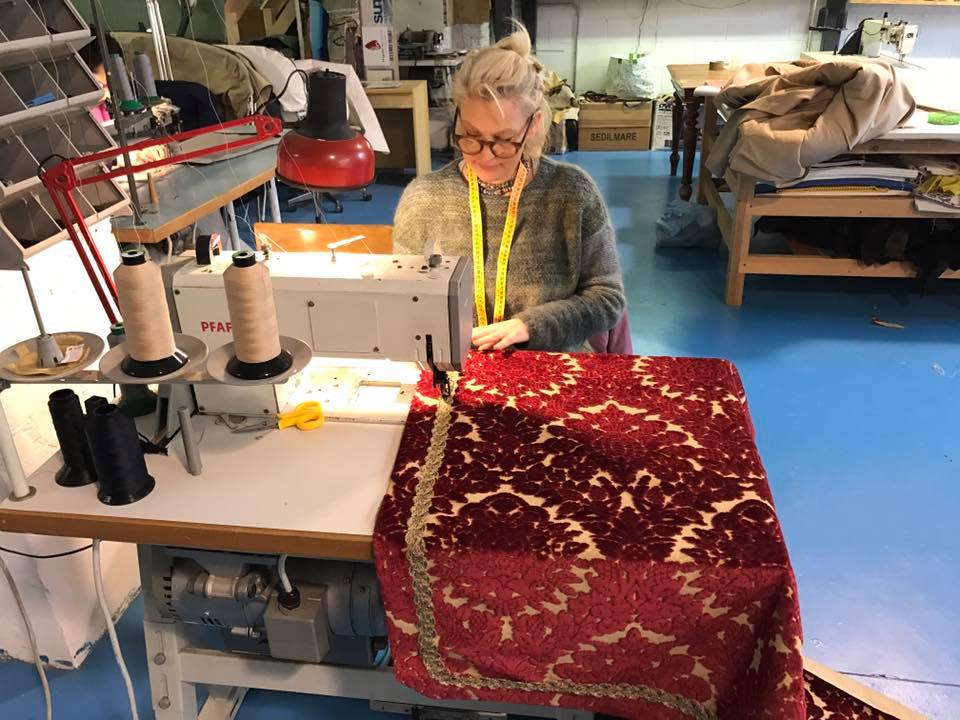 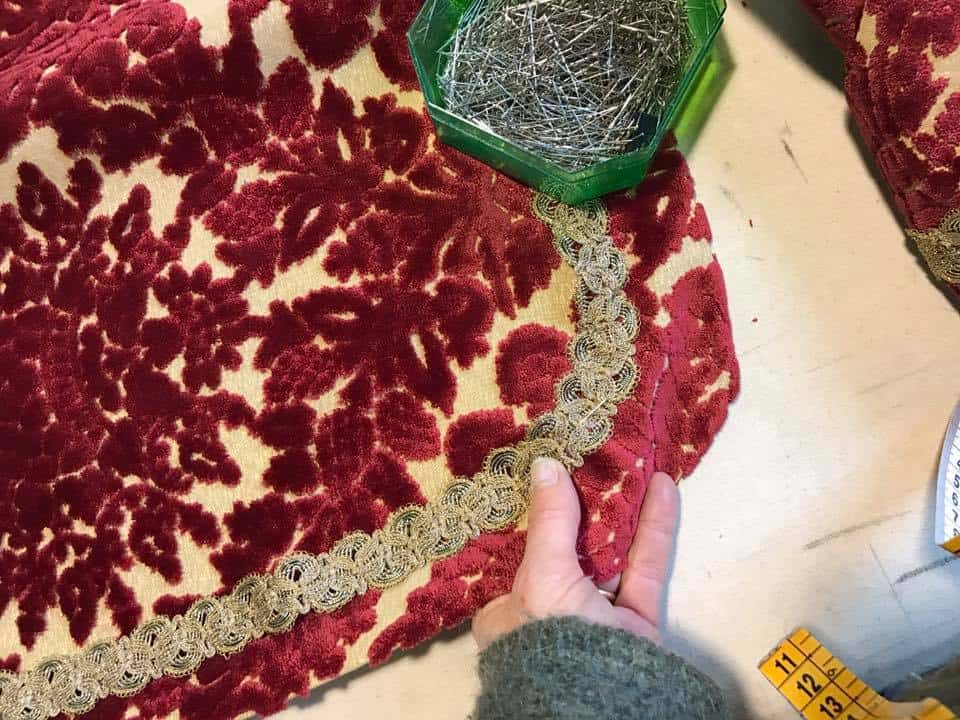 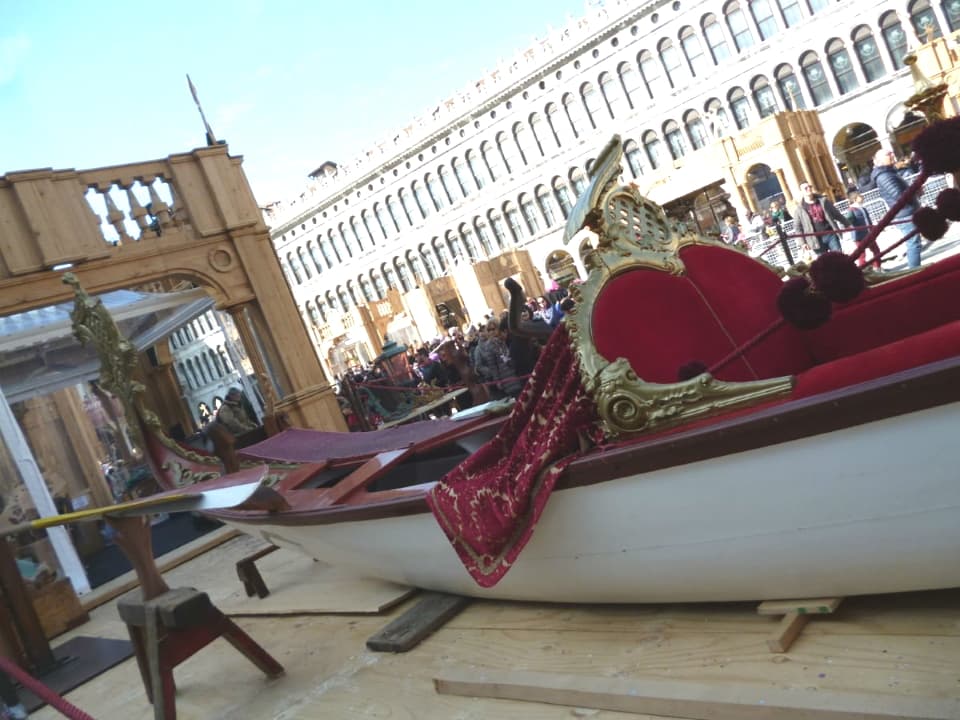 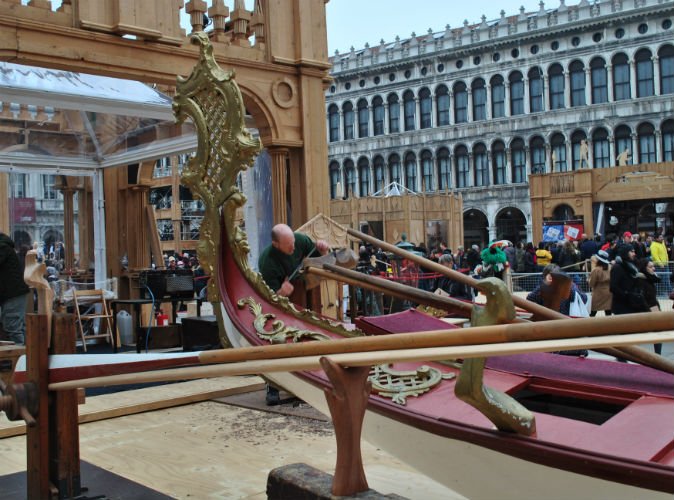 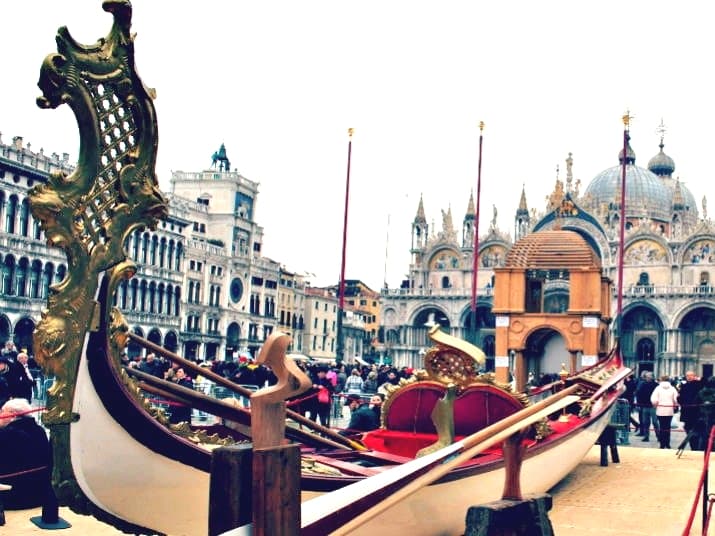 The restoration of the Dogaressa with our Ardis velvet – Image gallery