A Noble Brocatelle at the Court of the Dukes of Aosta 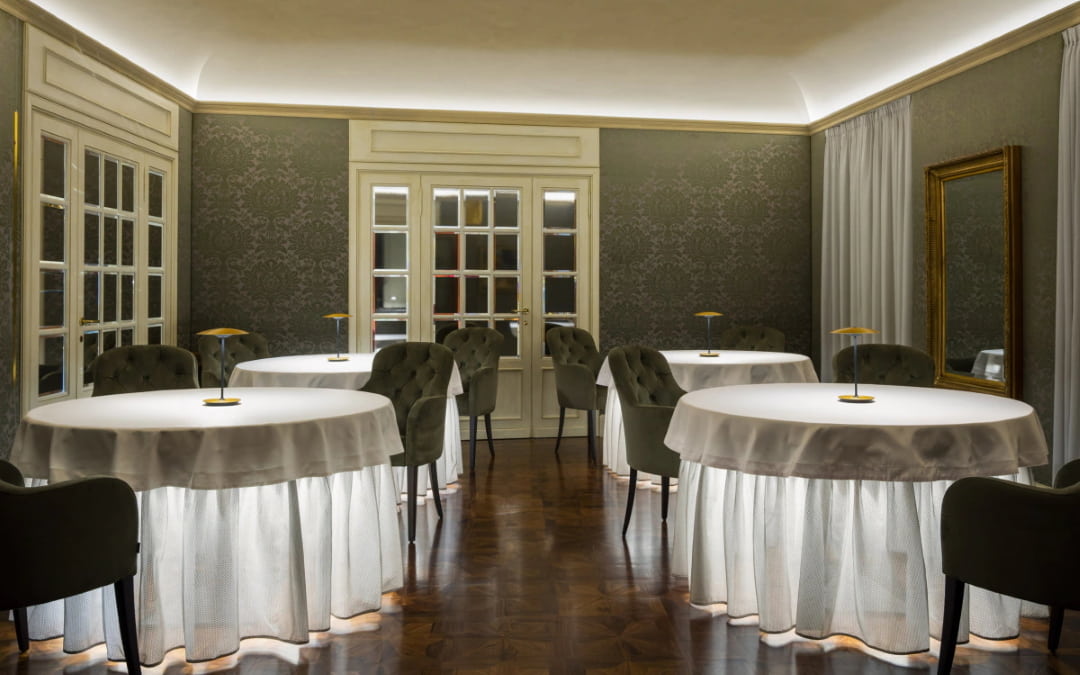 In Trieste, an Italian city that embodies both Mitteleuropean and Mediterranean charm, a project by Egidio Panzera Architect has made the Grand Hotel Duchi d’Aosta, an Italian hotellerie excellence, even more exclusive. The project also featured Bevilacqua fabrics: let’s discover them together.

The Grand Hotel Duchi d’Aosta is a 5-star boutique hotel located in Trieste’s central square “Piazza Unità d’Italia”. Beautiful and cultured, Trieste is Italy’s most cosmopolitan city and is located in the far northeast of the country, on the border with Slovenia, overlooking the sea.

For centuries a hub of both trade and cultural exchange (its name derives from “market” in the ancient Illyrian language), Trieste has always represented a virtual bridge between central and southern Europe and is a melting pot of languages, cultures, and religions. It is also famous for its cafes, which were renowned literary circles frequented by such literary greats as Italo Svevo, Umberto Saba, and James Joyce. The majestic Piazza Unità d’Italia, overlooking the Gulf of Trieste, is home to some of the city’s most beautiful and prestigious buildings on three sides. These include the Grand Hotel Duchi d’Aosta, built in 1873 but in an area that had been a hotel since as early as the 1300s and hosted countless illustrious people over the centuries.

The eclectic-style facade is decorated with Corinthian pilasters, floral friezes, and, at the top, a columned balustrade (in the central part of which the date of construction is indicated) surmounted by two statues, one depicting Trieste, the other Mercury, god of commerce. The hotel’s current name was assumed in 1973, and since then it has been synonymous with Central European style, elegance, and refinement.

Inside are a few dining gems: the exclusive Harry’s Piccolo restaurant, by star chefs Matteo Metullio and Davide de Pra; the elegant and more informal Harry’s Bistrò; Harry’s Pasticceria; and Harry’s Bar, synonymous with gastronomic excellence in keeping with the philosophy of its creator Arrigo Cipriani but with an amiably Trieste atmosphere.

The hotel lobby, Harry’s Bar, and Harry’s Piccolo restaurant have undergone a redevelopment, by the “Egidio Panzera Architect” studio. 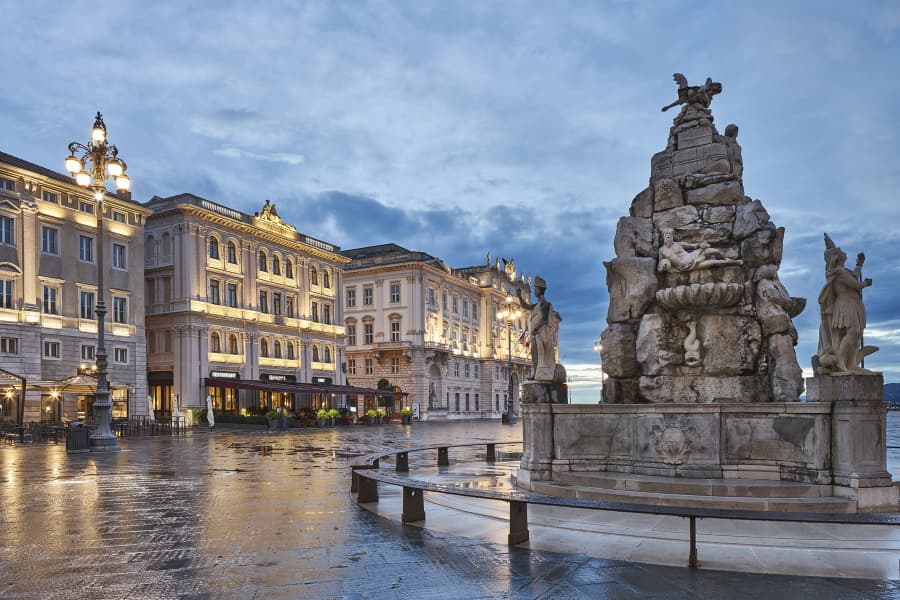 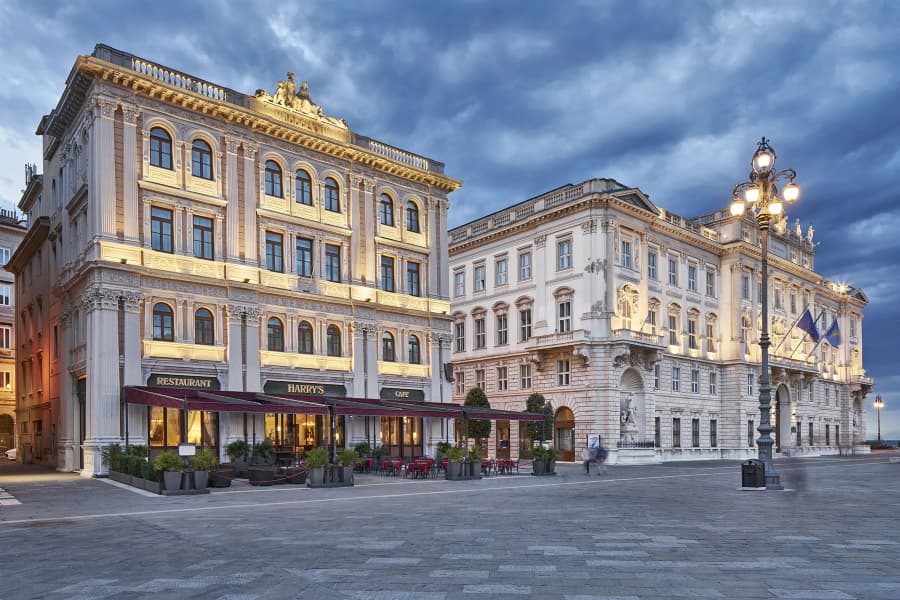 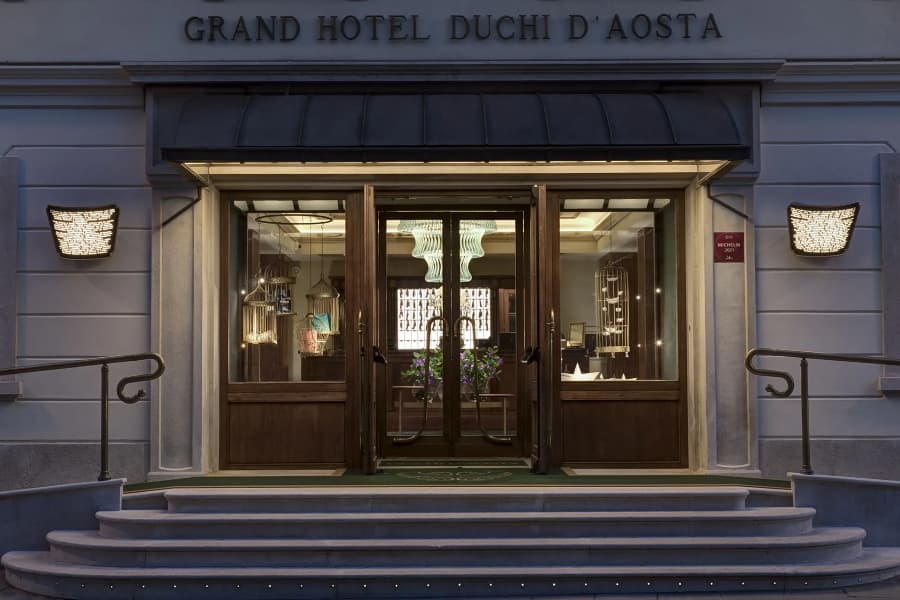 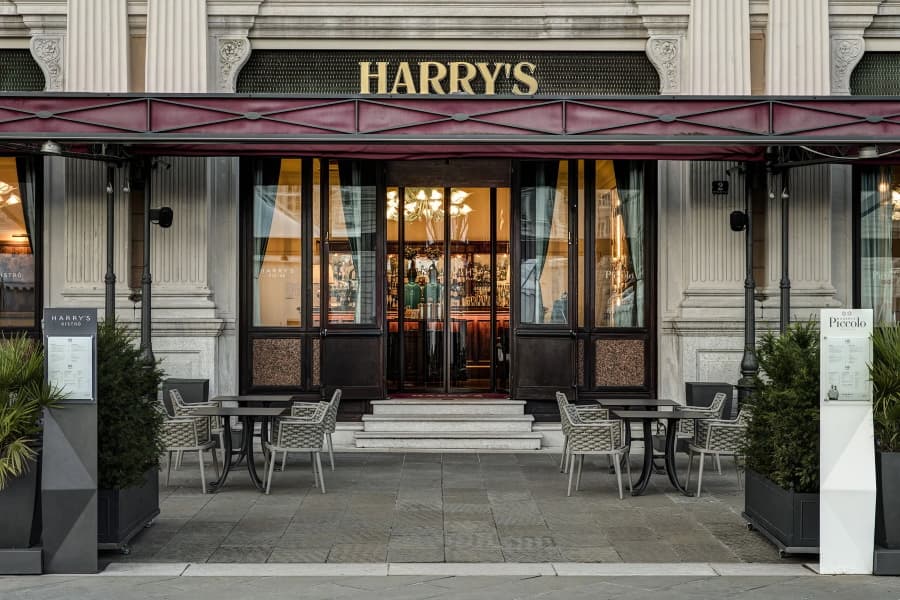 In the refurbishment of the Harry’s Piccolo starred restaurant and Harry’s Bar café, spaces were rethought to accommodate a larger number of people. The project, signed by architect Egidio Panzera, grew out of an in-depth historical and architectural study to preserve the heritage of the place but reinterpret it in a contemporary way.

To emphasize the historical importance of its spaces, the elitist nature and identity of the hotel, which reached the height of its splendor during Habsburg rule, exclusive materials and a color palette favoring green, red, and blue were chosen.

While respecting the requirements of functionality, the firm wanted to maintain the elegance of the place and make it a natural extension of the magnificent Piazza Unità d’Italia.

To the right of the hotel lobby is the exclusive Svevo room, whose walls have been embellished with a fine fabric from our Tessitura: Sagredo brocatelle, whose design is inspired by a 17th-century ornamental motif. The color chosen is Coral, a deep and warm red, to highlight the exclusive yet cozy character of the place. 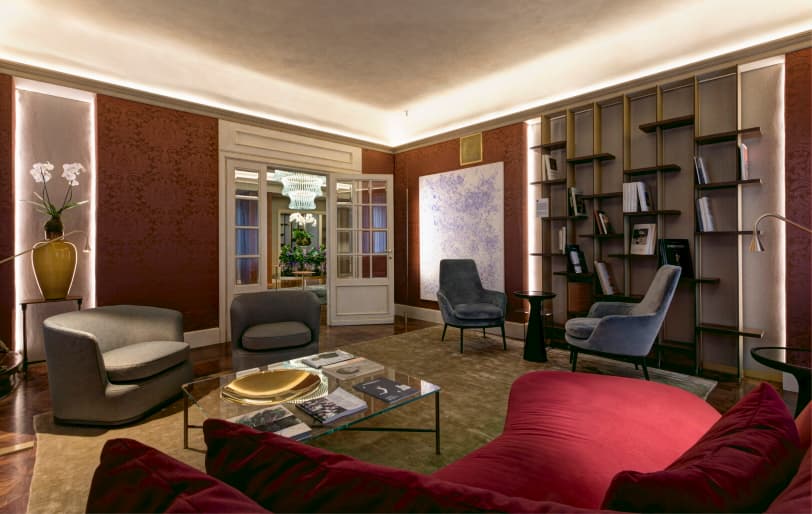 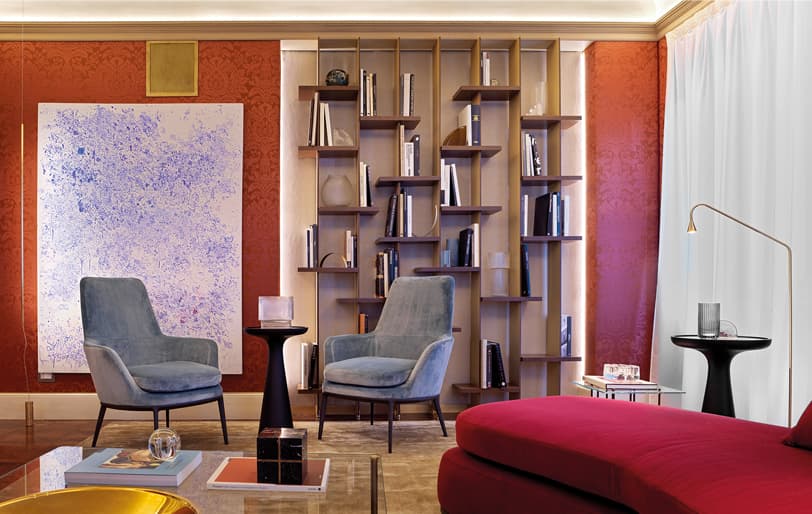 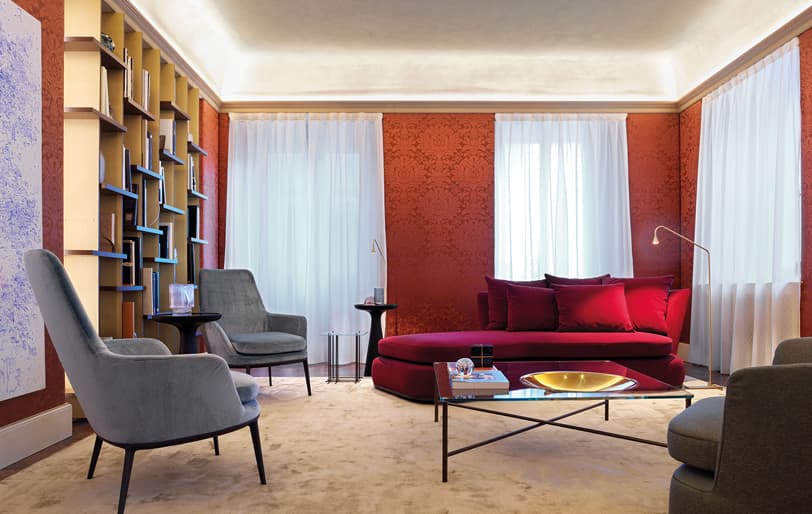 To the left of the lobby is the Club of Clubs, a room used by the starred restaurant Harry’s Piccolo. This dining area has become a kind of stage with a poetic atmosphere in which graceful ballerinas – the room’s tables set with long tulle skirts softly backlit – twirl elegantly. To frame them, the splendid Sagredo brocatelle in a delicate and refined sage green color, Jade, was chosen to cover the walls. 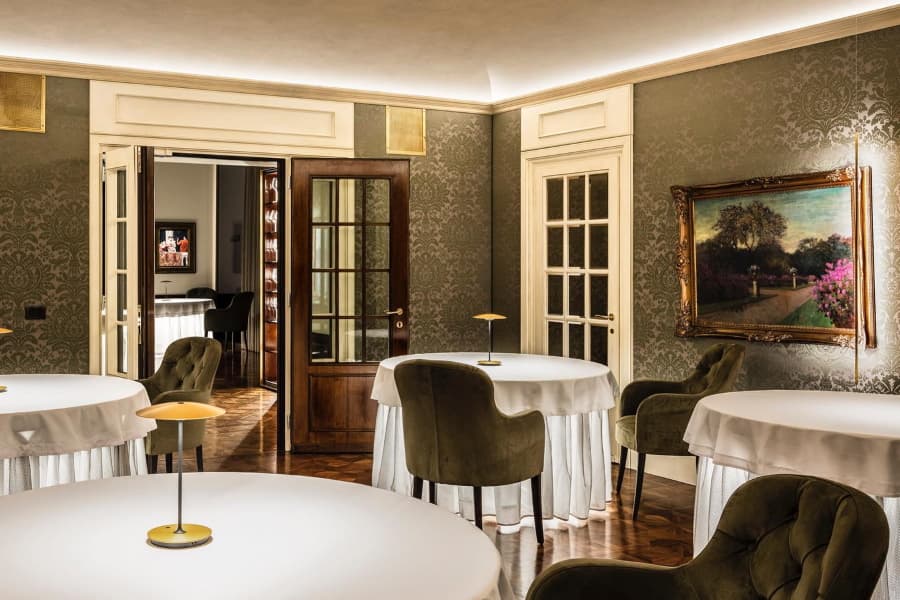 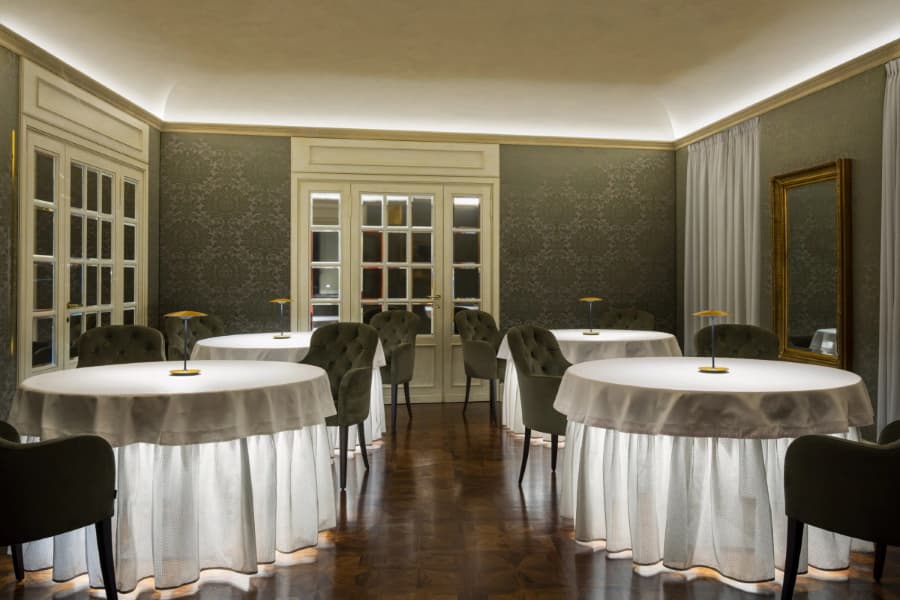 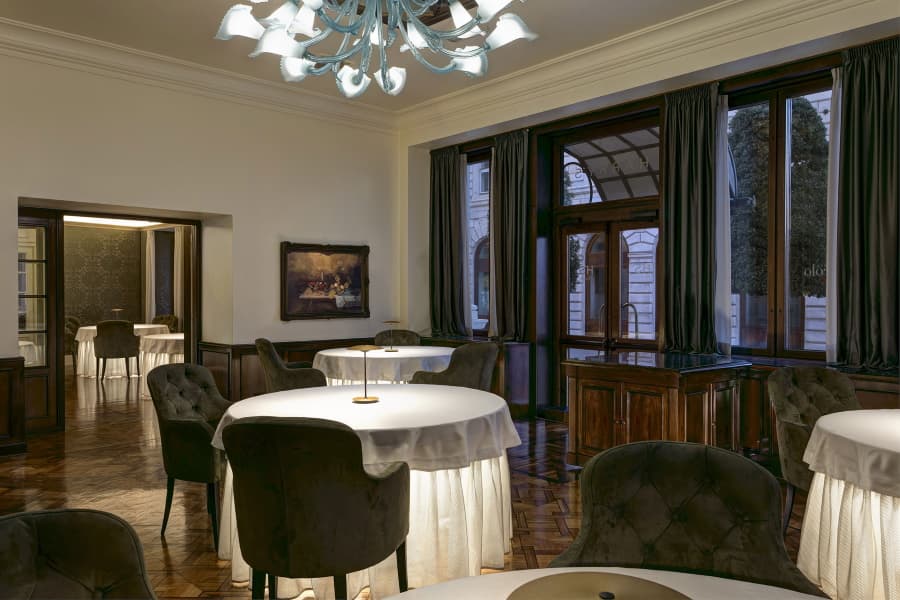 The fabric chosen by Egidio Panzera Architect to cover the walls of Harry’s Piccolo and the Svevo Room is Sagredo brocatelle from our Tessitura. It is one of the most lavishly decorated brocatelle among those in our collection.

Brocatelle is a fabric made with multiple warps and wefts in different yarns which creates different tensions allowing the pattern to take on the characteristic raised effect. Because one of the wefts is linen, it is a fabric that lends itself very well to wall and seat coverings.

The ornamental pattern of Sagredo brocatelle originated in the 17th century. Like most of our designs, it is kept in the Bevilacqua historical archives and is repurposed today on unique fabrics that have in their DNA a centuries-long rich history. The inspiration is nature, in a majestic composition of great stylistic harmony, with large volumes formed by a triumph of leaves, flowers, and birds. It’s a pattern that encompasses the oriental influences typical of some Renaissance fabrics elegantly reinterpreted.

Its name recalls that of one of the most influential, wealthy, and powerful aristocratic families in Venice, which counted among its members eminent politicians, clergymen, military commanders, and, in the Renaissance, the highest public office of the Venetian Republic at the time, a Doge. 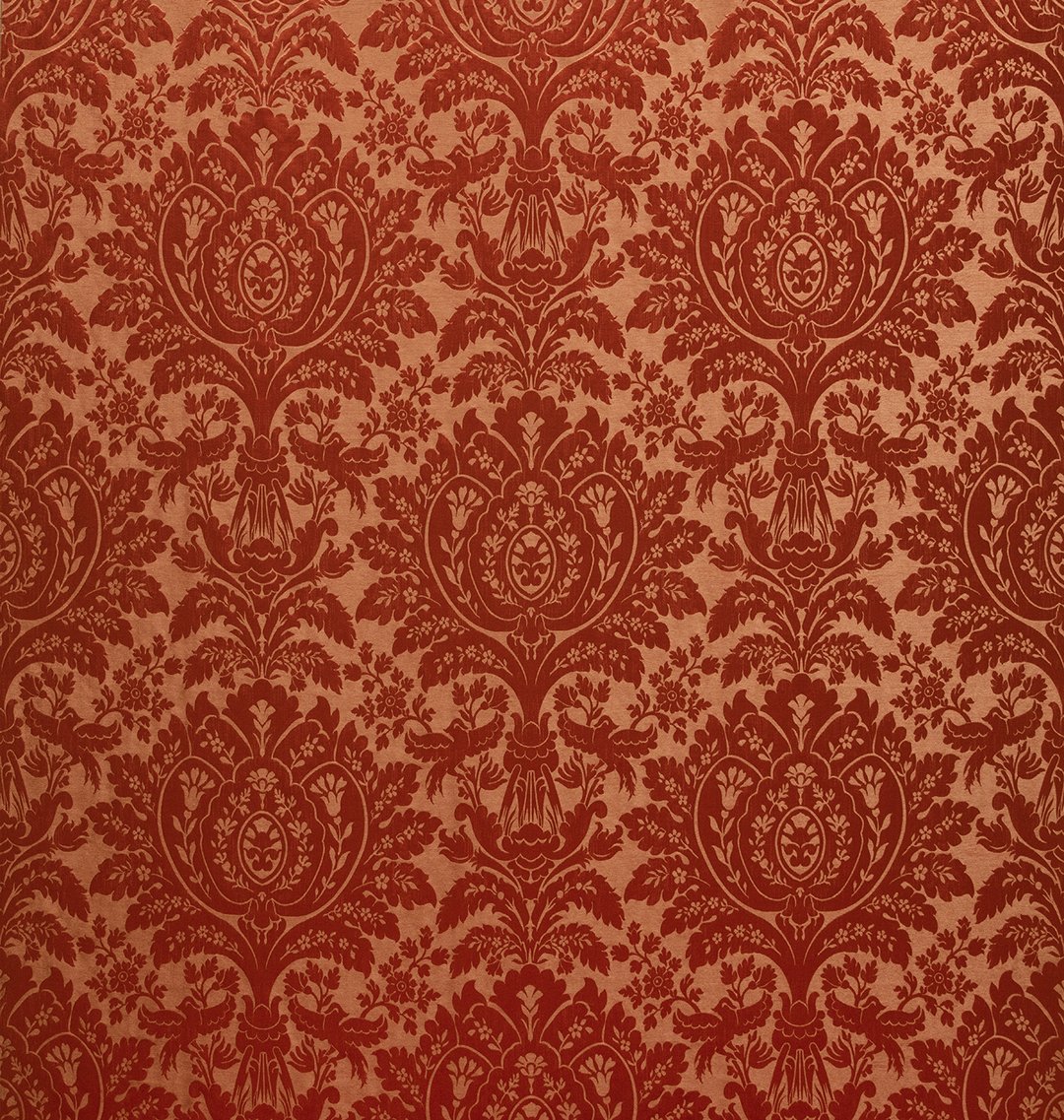 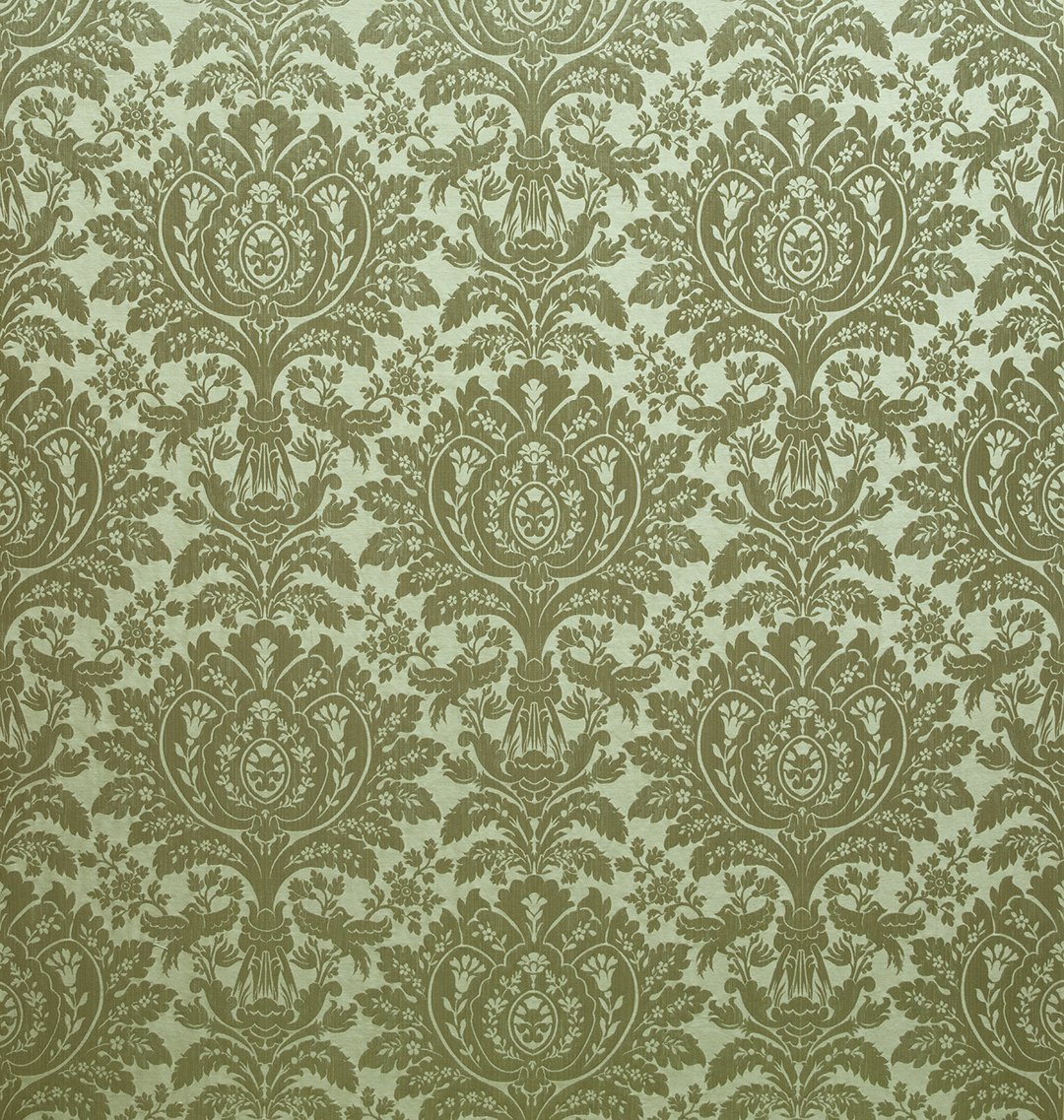