The restoration of one of Venice’s pearls: Grancaffè Quadri 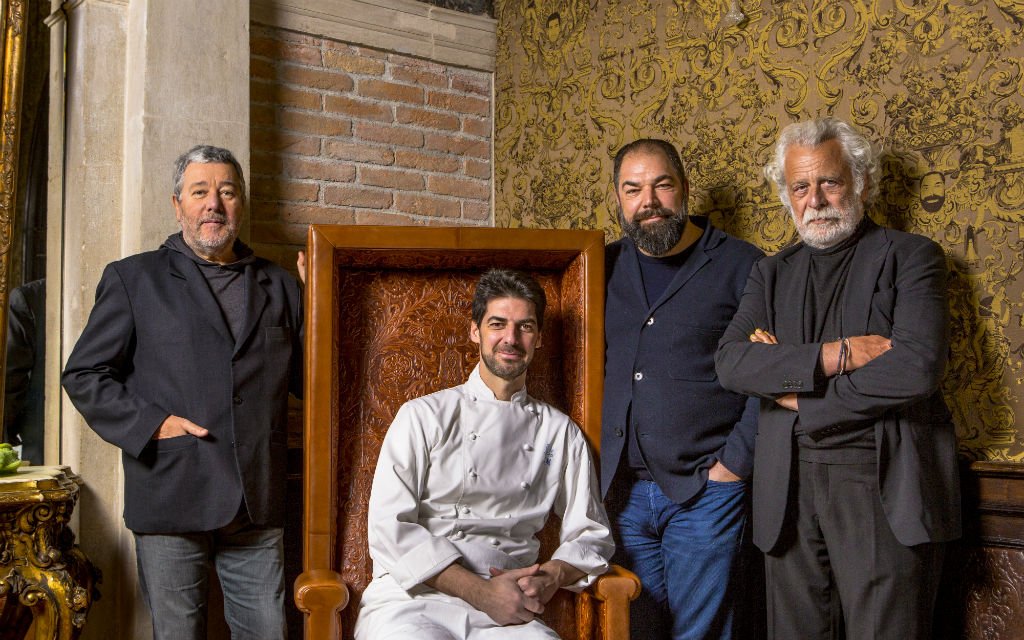 If you’ve ever been on Saint Mark’s Square you simply can’t have missed: from April to October, there’s an orchestra busy entertaining its guests just outside its doors. That’s it, we’re talking about Grancaffè and Restaurant Quadri, under the Procuratie Vecchie since 1775 and recently restored, though keeping its historical interiors untouched. Our Tessitura, too, has taken part in this restoration, providing one of its upholstery fabrics.

The history of Venice’s Caffè Quadri

As a matter of fact, the history of the Quadri began more than a century earlier, in 1638, when it was still called Il Rimedio (“The Remedy”). Indeed, it was a shop that sold Malvasia, a wine considered as a good remedy to give a boost to your body and soul.

But it got its present name – and use – only in 1775, when the Venetian merchant Giorgio Quadri decided to buy this shop to turn it into a place where people could find the “hot black water”. Coffee, in a word.

In 1830 the restaurant on the first floor was opened and, in 2011, cafe and restaurant were both acquired by the brothers Massimiliano and Raffaele Alajmo, who’ve maintained its historic style and kept up the cuisine’s quality. They’re both luxury places, whose uniqueness is indeed related to the breathtaking location – you can see the wonderful Saint Mark’s Square from every window -, as well as to their service and food.

So Grancaffè Quadri is now one of the most exclusive lounges in Venice. And, to celebrate this connection to the city, it’s been renewed with the help of Venetian artisans to bring the 18th-century building back to its splendor.

From October 2017 to February 2018 Grancaffè Quadri has undergone a major renewal, projected by architect Marino Folin and the French designer and architect Philippe Starck. The novelties are quite a few: from the “Quadri” sign that catches everyone’s eye on the external wall, whose golden characters are now brighter than ever, to the pillars’ capitals, showing poets and musicians from whom chef Massimiliano Alajmo draws his inspiration.

But Restaurant Quadri has been thoroughly revamped, too: its walls, previously covered in a red fabric, are now decorated with one of our brocatelles. The original pattern comes from our Grottesche brocatelle, but Philippe Starck has transformed it completely. Instead of the Gorgons’ heads it shows the faces of the Alajmo brothers, whereas the winged figures that flanked them have turned into astronauts bearing a rifle. 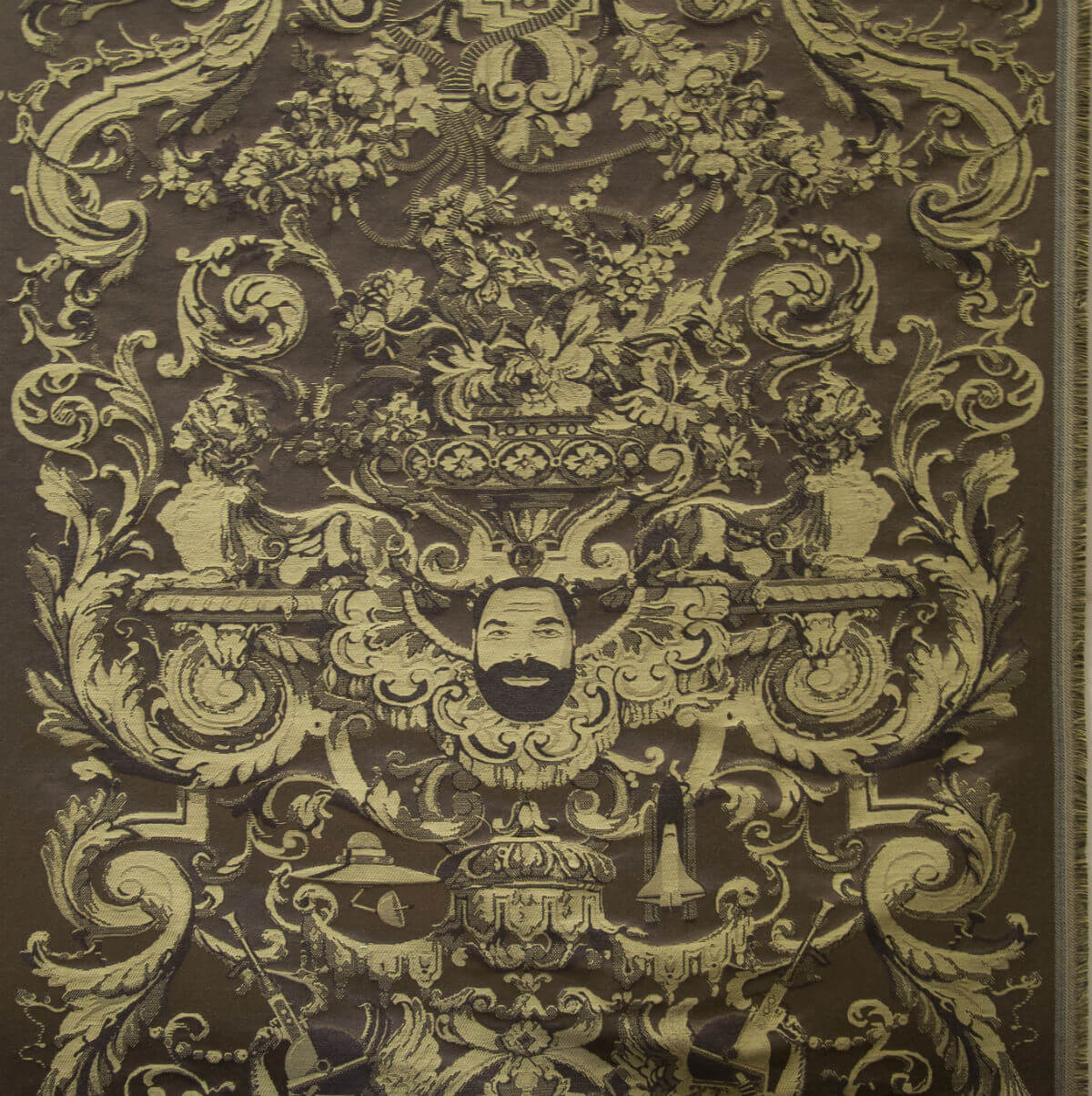 The cafe’s historical style is therefore still there, though with an extra unconventional and ironic touch that underlines the innovative spirit of Quadri’s cuisine, that keeps on respecting traditions, anyway. 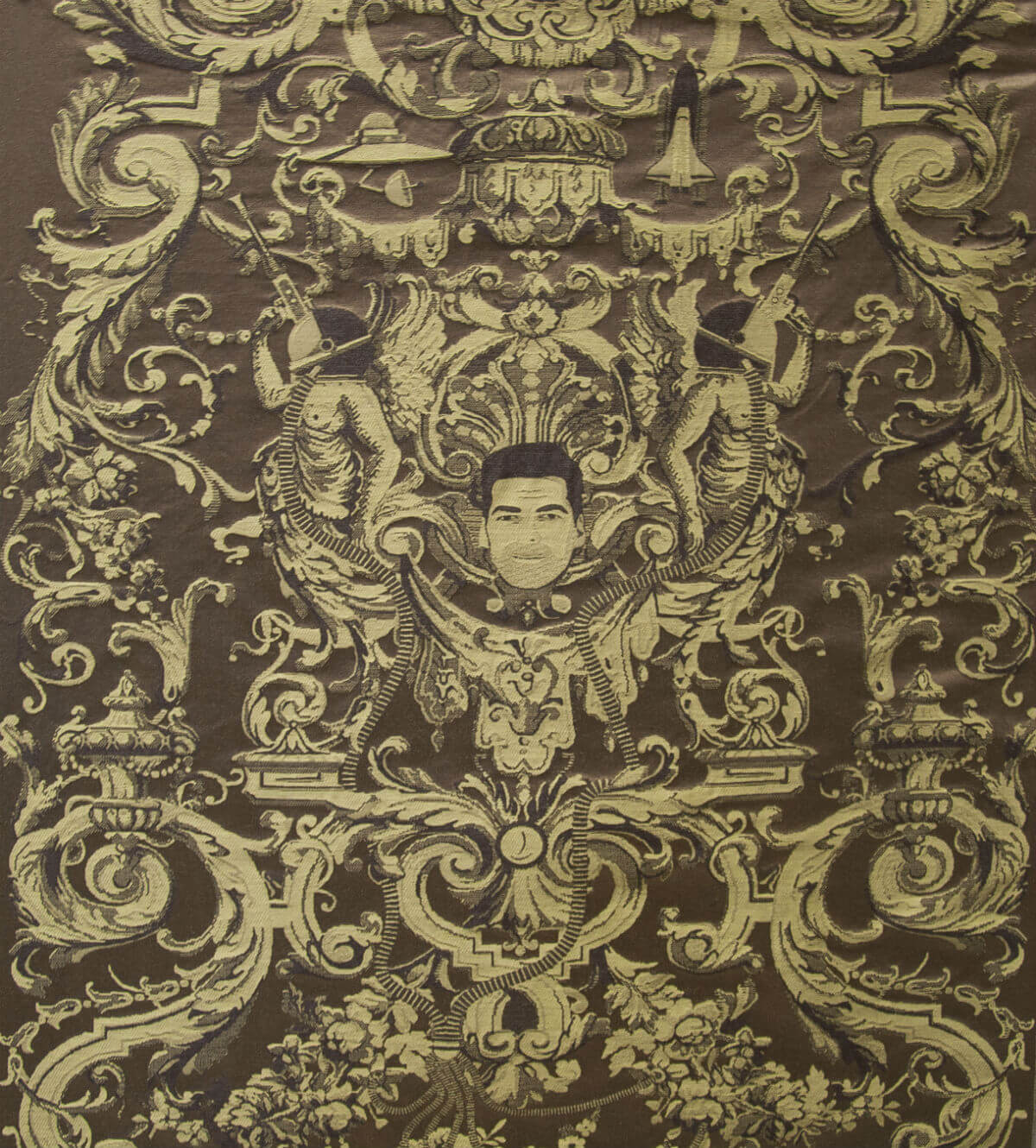 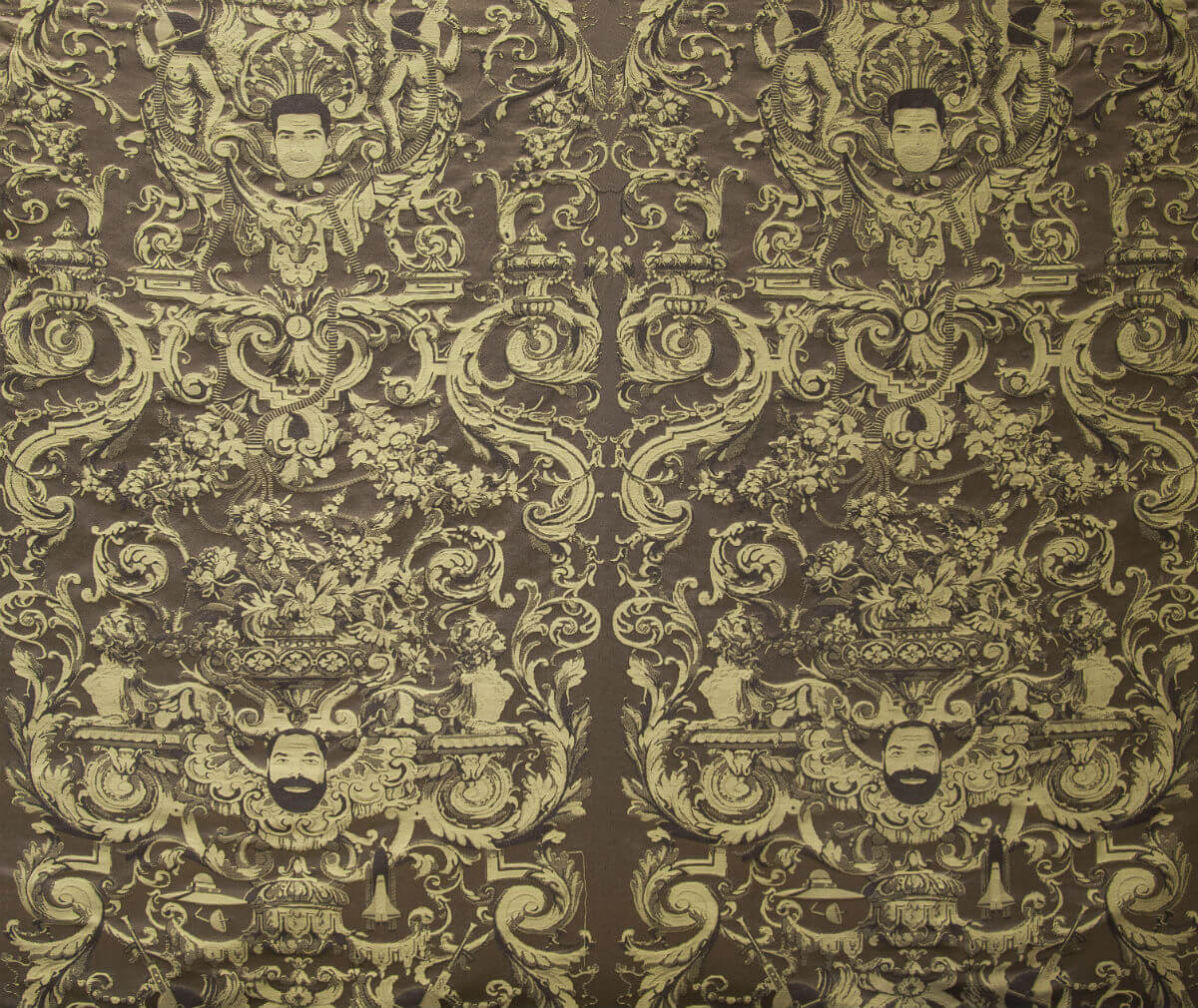 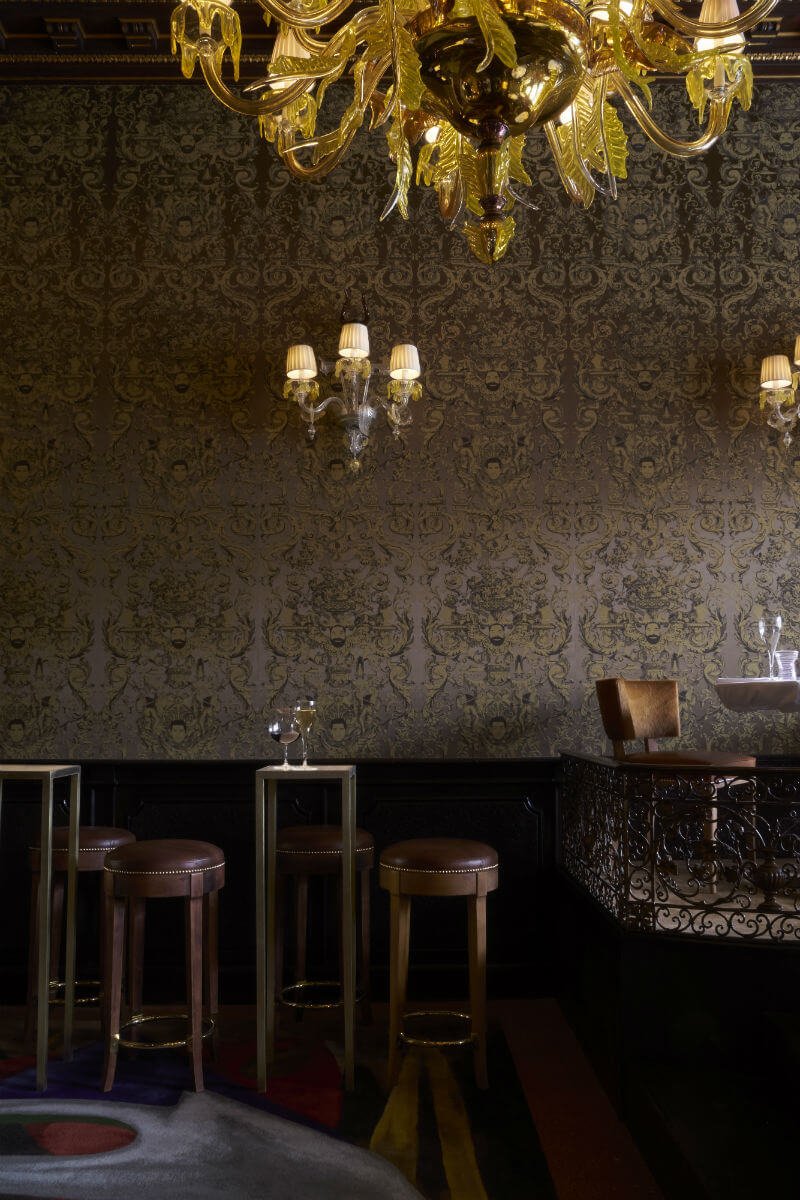 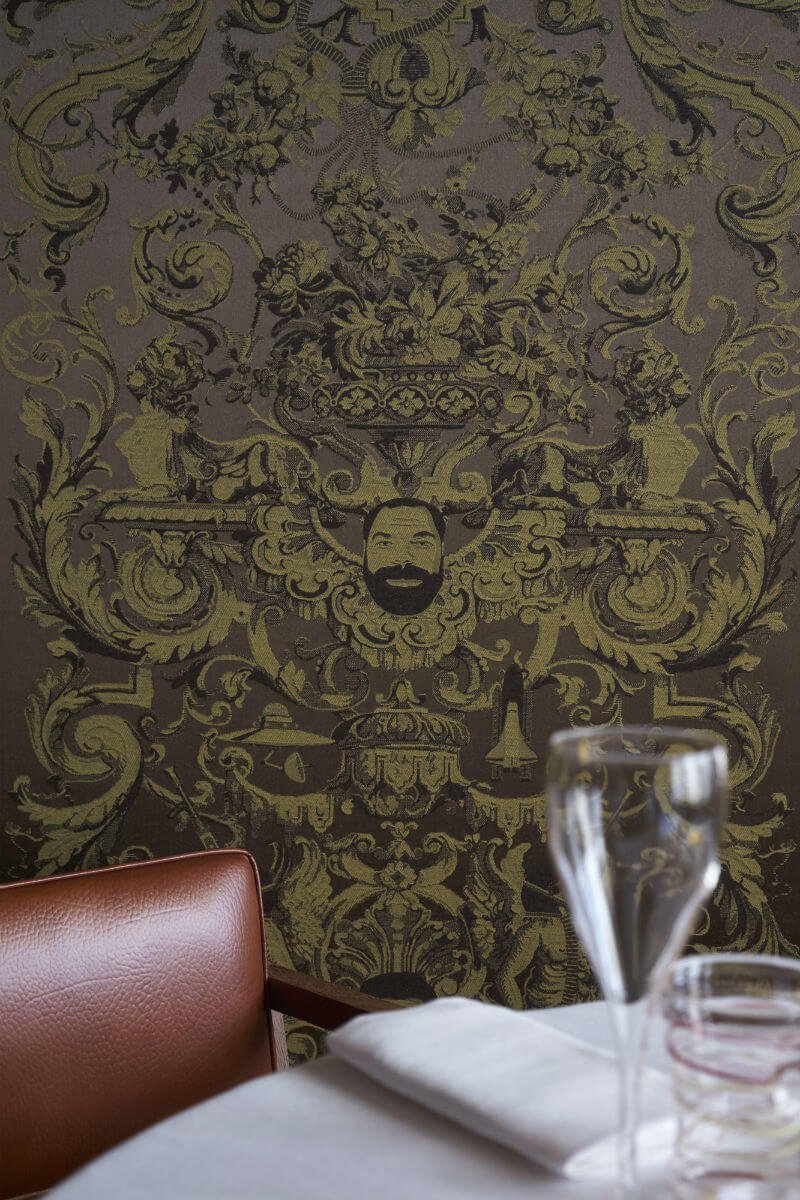 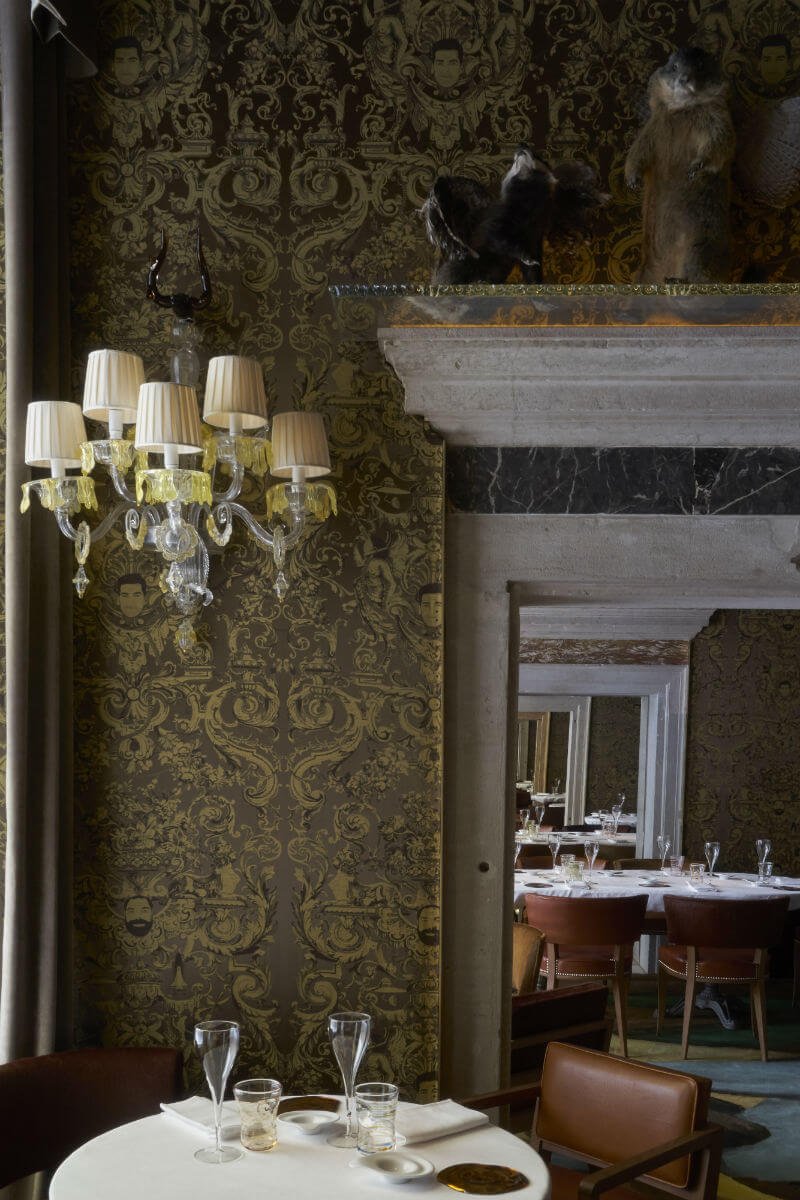 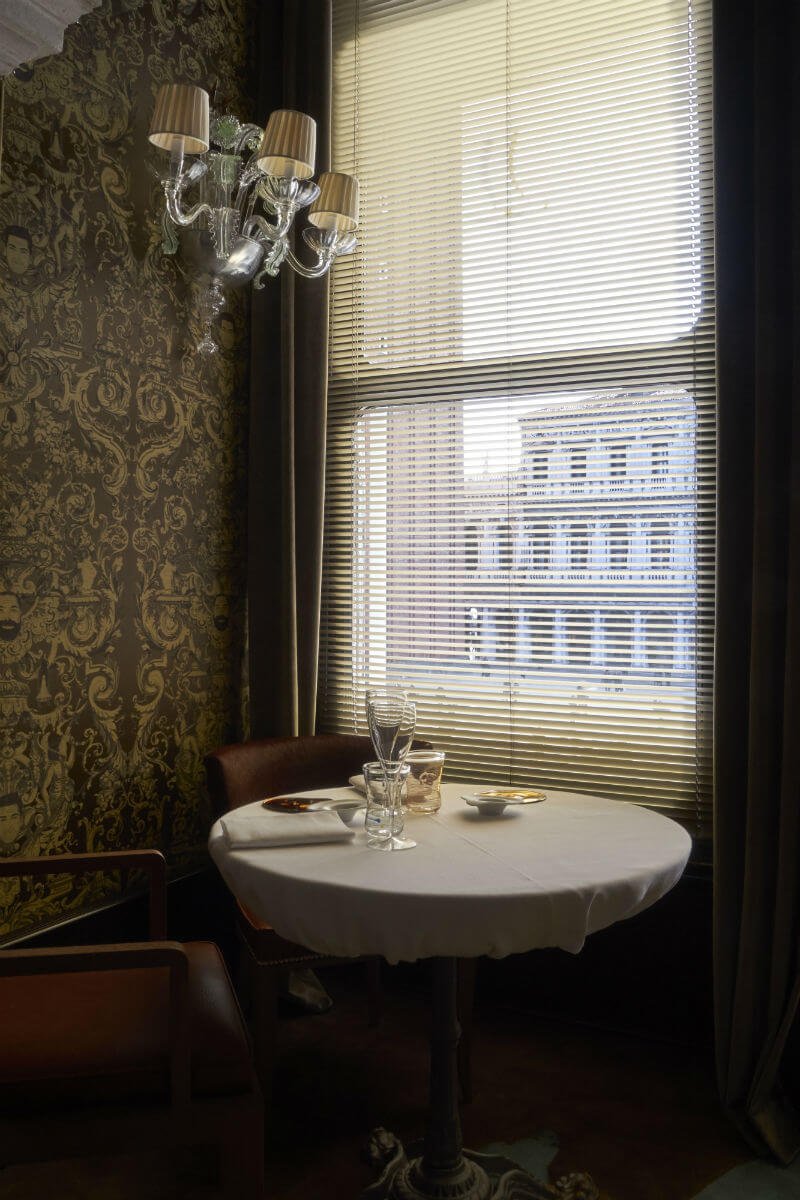 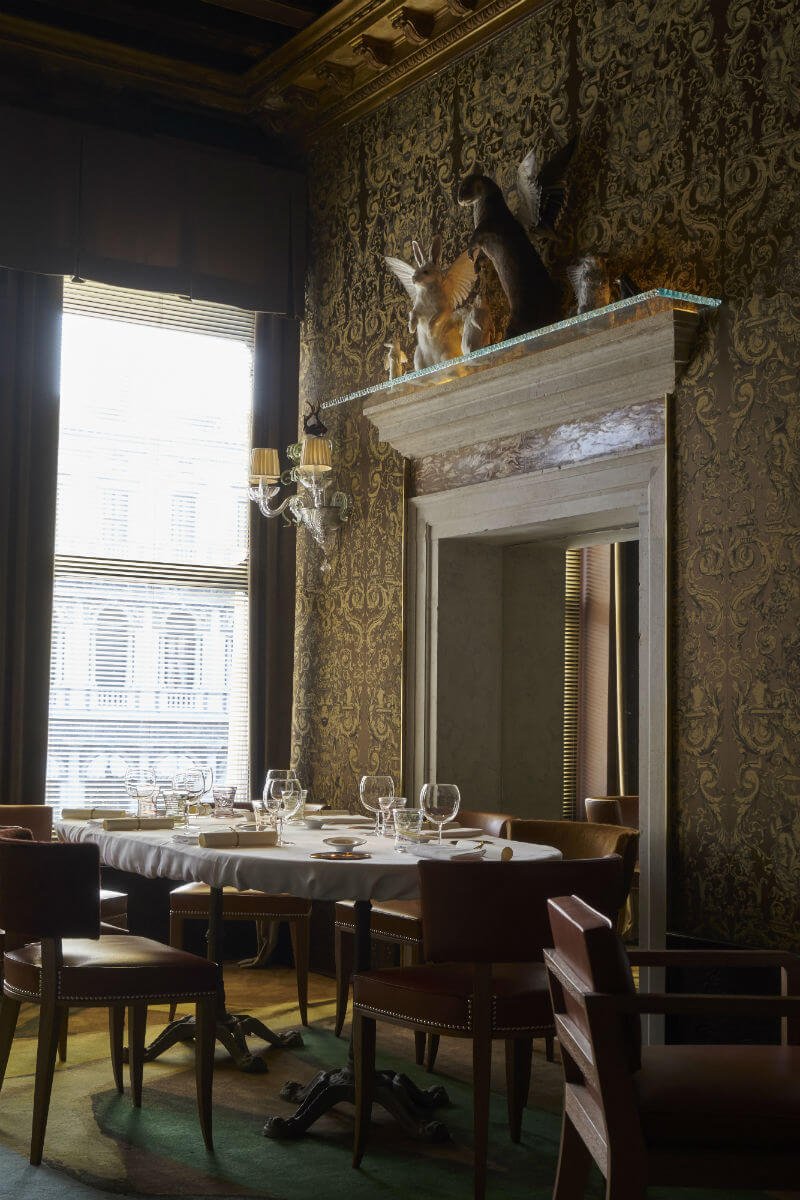 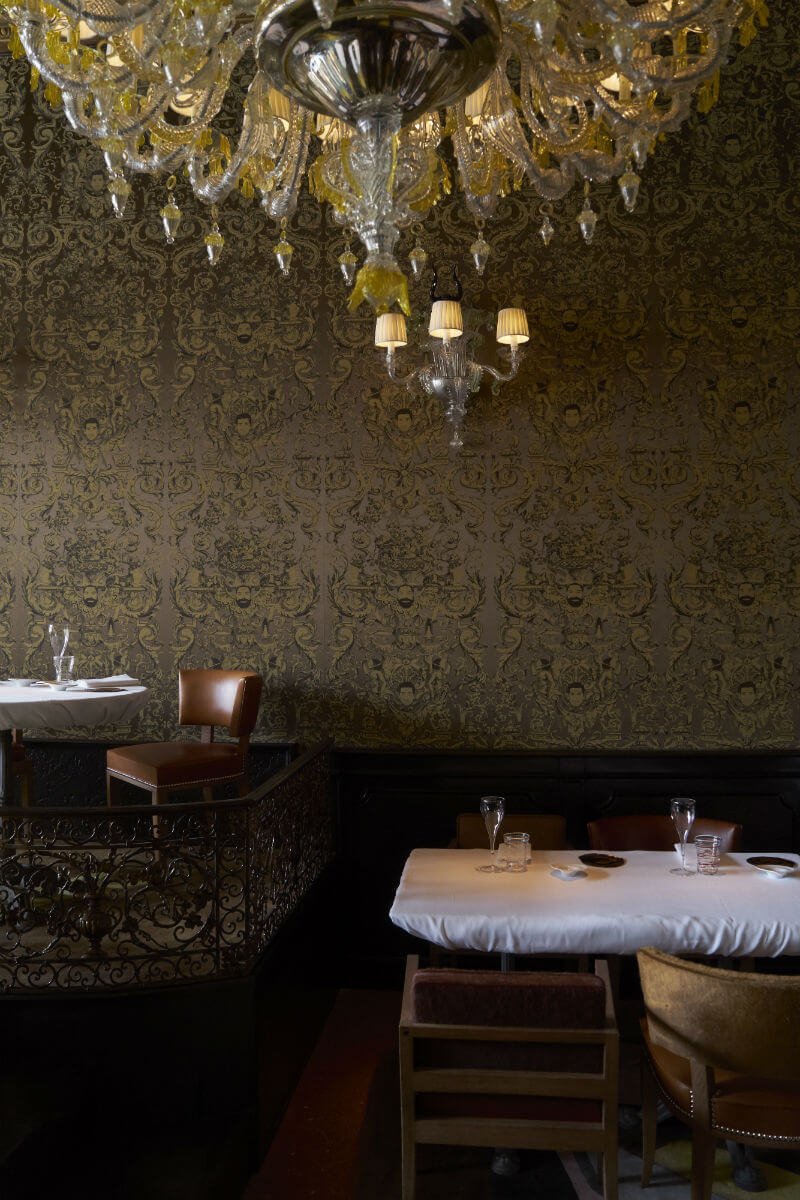 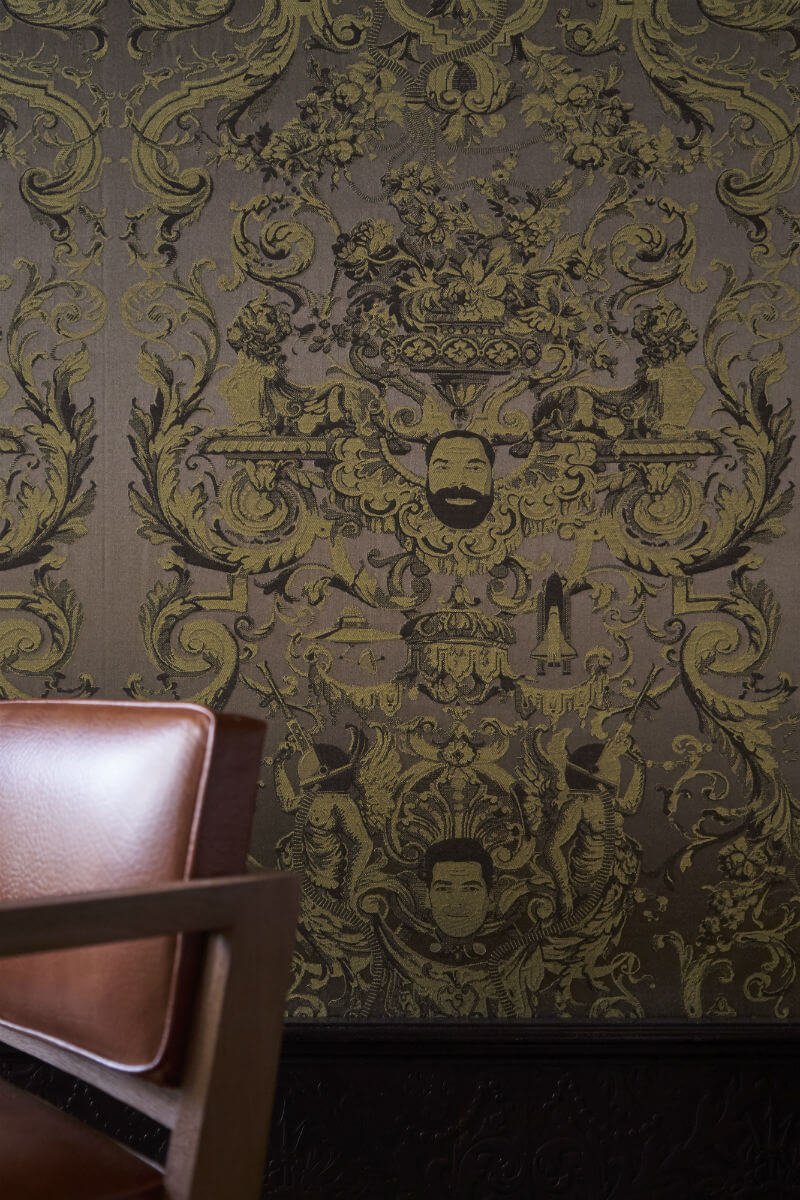 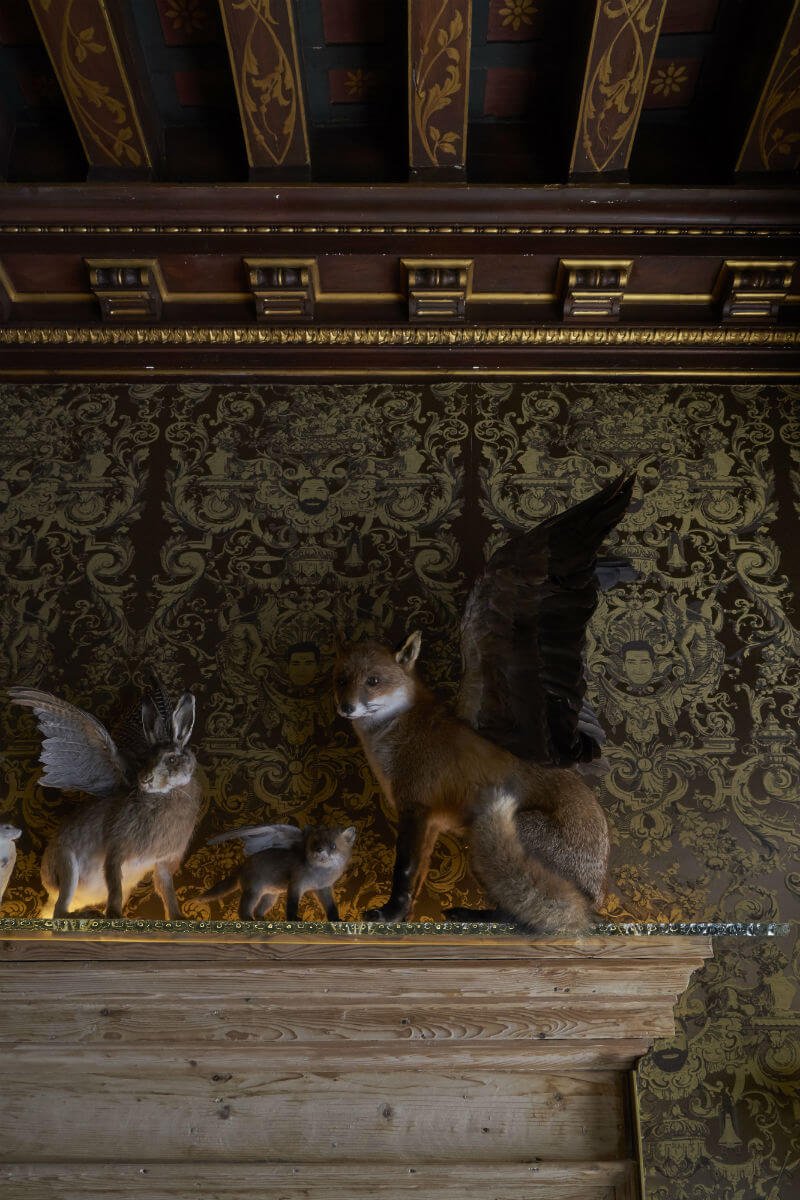 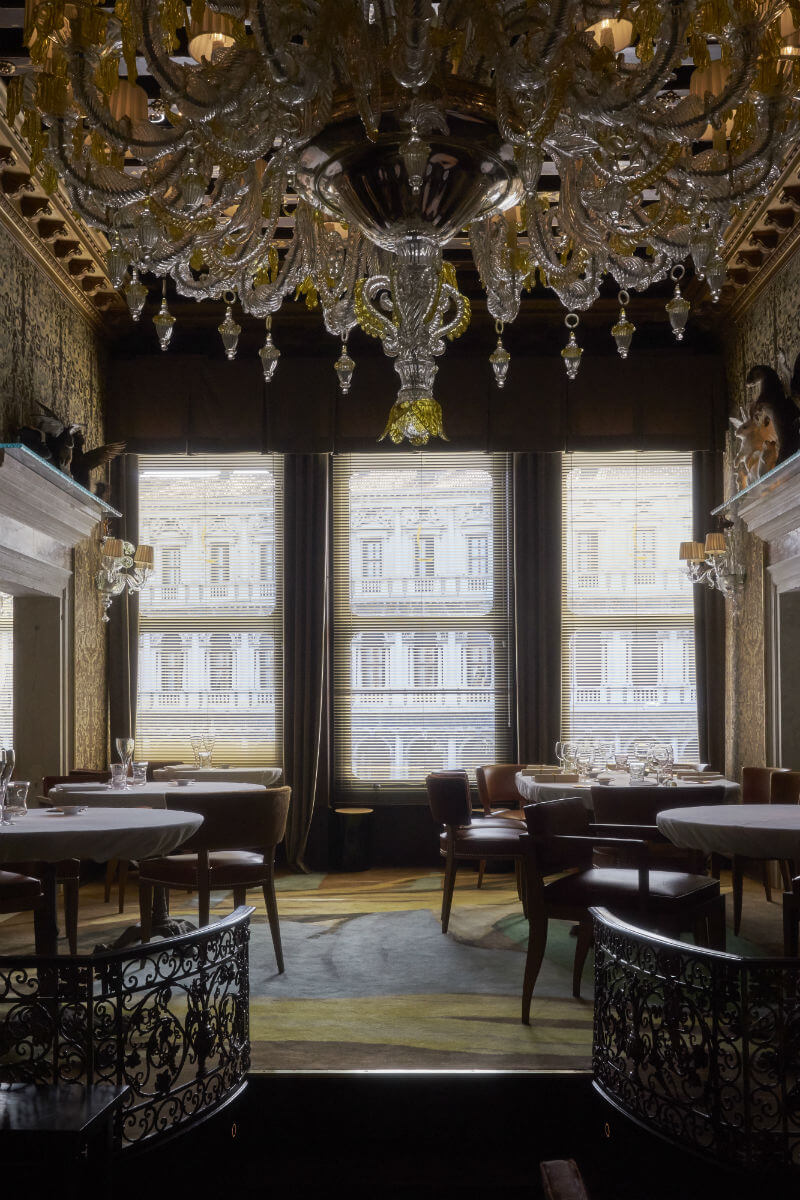 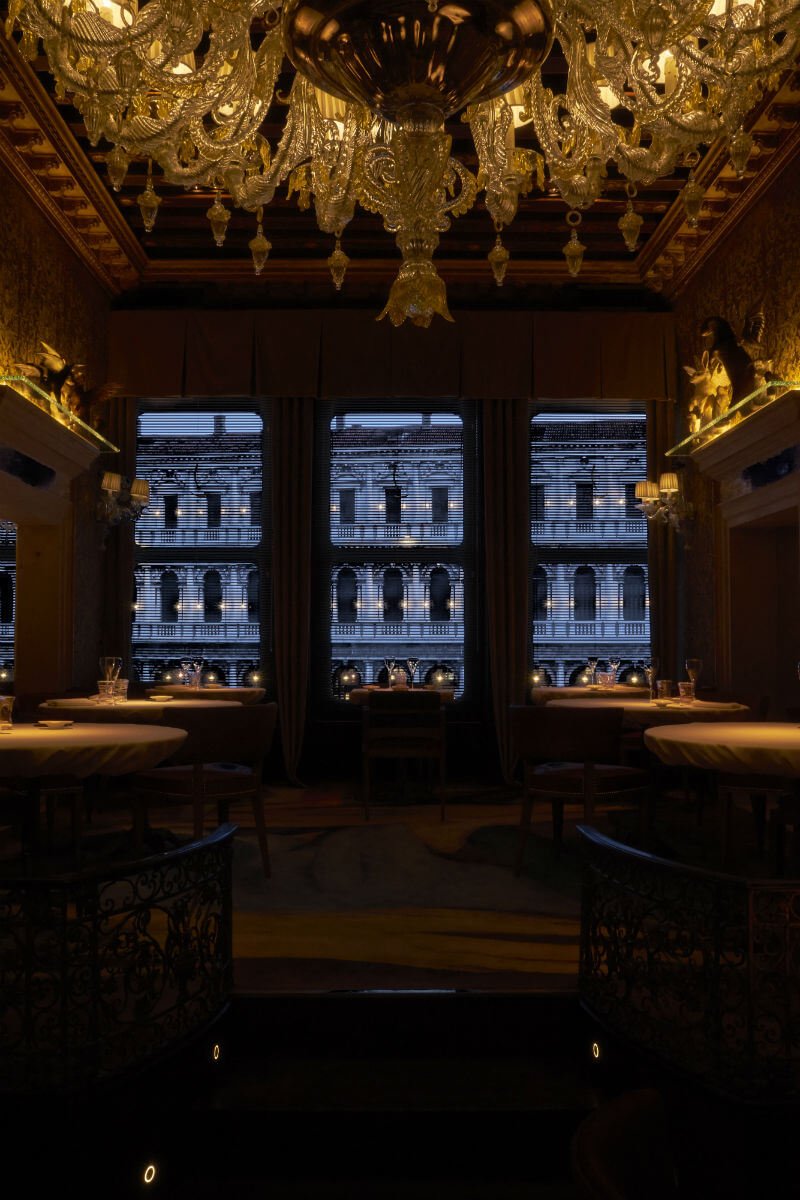 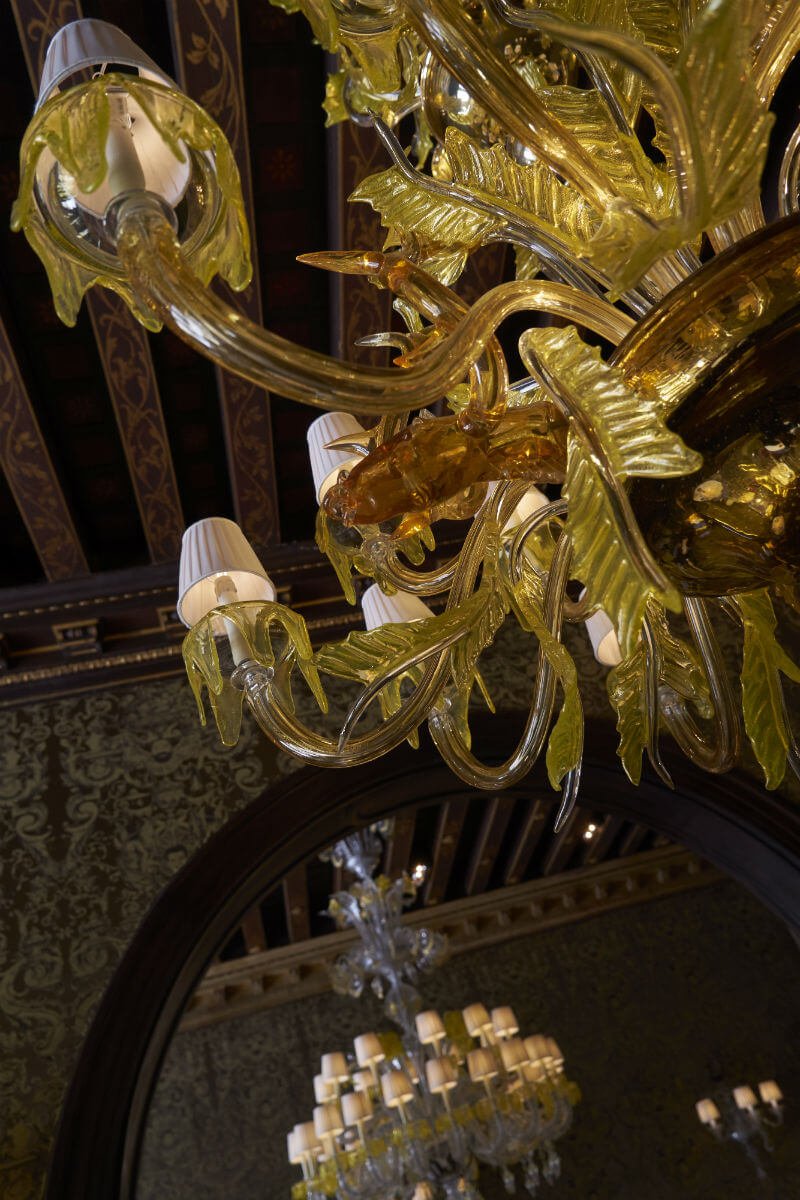