Leoni soprarizzo velvet: behind the scenes 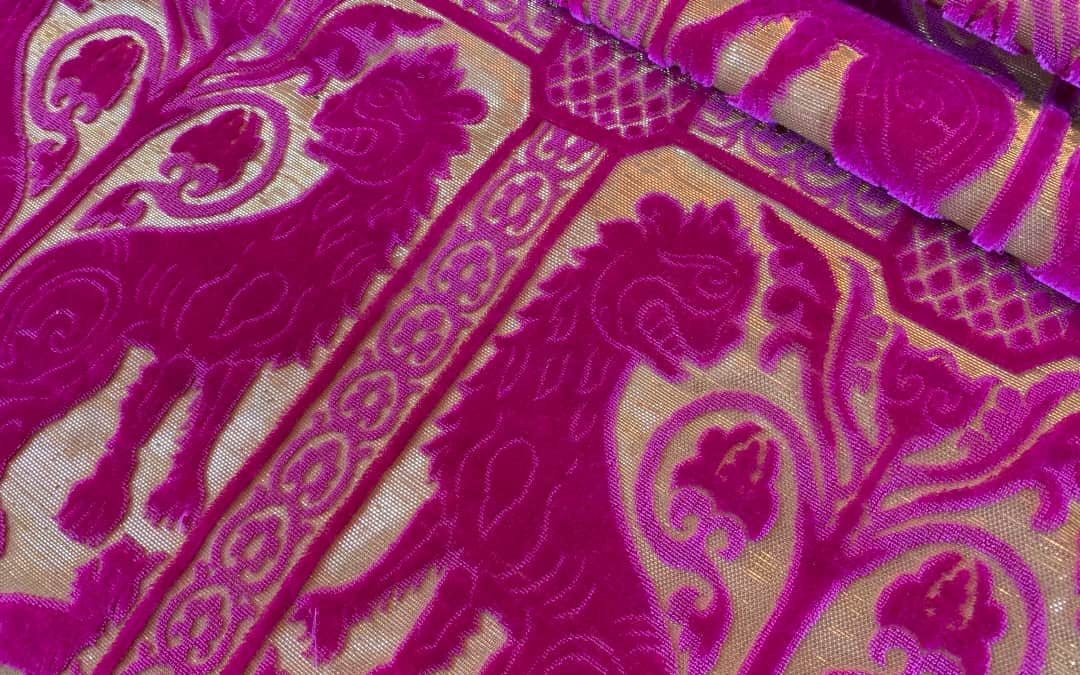 Behind Bevilacqua velvets lies a tradition of workmanship and patience handed down from generation to generation. The symbol of the Persian lions has ancient origins too and it is depicted in perhaps the most significant velvet for our Tessitura: the Leoni handmade velvet.

From silk threads to the Leoni manual velvet

Leoni soprarizzo velvet is born from silk threads, those of the 400 reels of the loom used to produce it. From the reels, the threads run through the holes in the cardboards placed above the loom, allowing the pattern to take shape: this is the great contribution of Joseph Marie Jacquard’s ingenious invention.

Between the threads of the warps coming out of the loom, the weaver slips some thin needles to weave the velvet overlay, which will then be removed with great precision. These needles are not identical to one another: those with a round section will be used to create the effect of curly velvet. Others, however, have a groove through which the weaver runs a razor blade that cuts the threads of the pile, obtaining the cut velvet, higher than the curly one. Hence the name “soprarizzo” is also called “sopra-riccio” (“over-the-curls”).

The cut velvet and the curly velvet can be distinguished also thanks to their color: even if obtained with the same yarn, the first one is darker because the cut pile absorbs light, while the second one is lighter because it reflects it.

Equal attention, however, must be paid to the loom: as it dates back to the 18th century, it’s not as fast as modern machines. It doesn’t work non-stop, but must be often recharged and reset: no wonder that the best it can achieve in one day is a 30-cm-longer fabric than the day before. But, even if it’s slow work, the fruit of craft traditions is always unique. 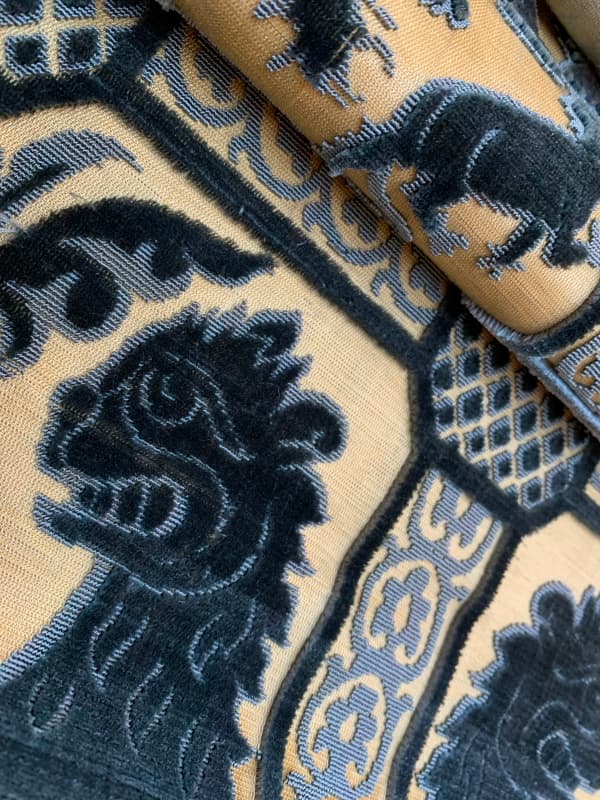 A detail of the Leoni soprarizzo velvet – color Indaco

The meaning of Persian Lions in a crest

This velvet motif has a deep meaning: two lions are placed on either side of a tree of life.

The lion is an ancient symbol of power in many cultures all around the world, which was first represented during the Stone Age. Its strength has turned it into the emblem of pharaohs, Mesopotamian rulers, and medieval houses, and it has been depicted on palaces, paintings, and as a motif for textiles.

In this case, it is the figure aimed at protecting and shielding the tree of life. In ancient Persia, the tree of life – put in its appearance in the 9th century B.C. in Mesopotamia – bears all the seeds for all other trees of the earth; in the Norse mythology, it is identified with Yggdrasil, the tree holding the worlds on its branches; for Christians, it corresponds to Christ’s cross.

All these, and many others, representations, though, do have something in common: the tree of life is almost always flanked by two figures, either human, monstrous, or animal ones, looking at it with admiration or defending it. From Syria and Palestine to Persia and Turkey and, eventually, to Venice.

This was the path that brought such an exotic motif from the Middle East to Italy, through the Silk Road, also becoming the pattern of one of our most precious soprarizzo velvets and the logo of Tessitura Bevilacqua in 2005. An intercultural and timeless symbol which, by depicting the defense of life, represents the safeguard of its foundations: traditions, even those of craftsmanship.