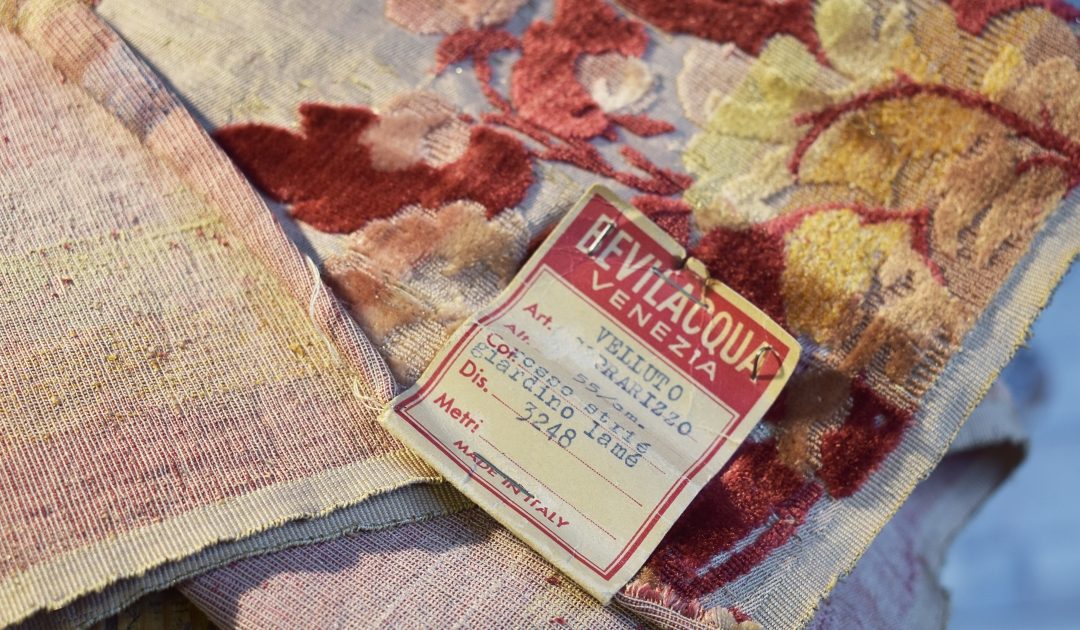 The garden motifs are characterized by flowers of different colors, leaves and wavy branches. Altough the origins are very old to determine the success were the Genoese weavers during the seventeenth century. Among the most relevant in our collection you may find the “giardino antico”.

The peculiarities of the jardiniere pattern

We have already talked about the history of garden velvets in this article. What we have not told you, however, is what makes this motif so special and valuable. These designs are characterized by the presence of leaves and flowers of large size, arranged symmetrically across the whole width of the fabric. In the 18th century they appeared, in a monochrome version, on damasks, too, as on our Giardino Craquelé 33077 Damask, for example. 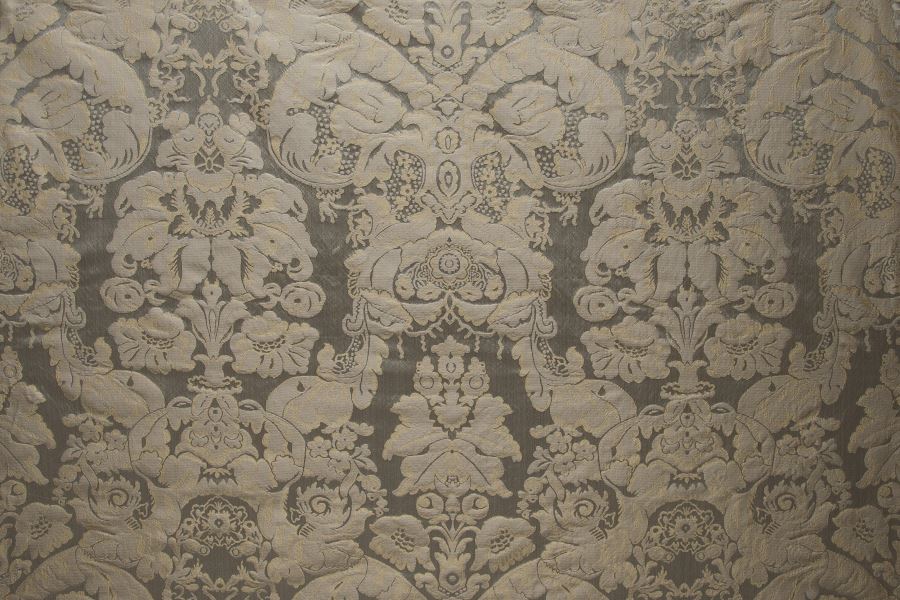 These velvets are extremely complicated: each colour requires an additional set of pile threads. The weaver also had to be able to combine all the colours harmoniously and to have a clear idea of how they would look once cut, since the cut velvet is darker than the curly one. We still encounter the same difficulties today, when we prepare a loom to weave a velvet like the Soprarizzo Giardino Antico. Indeed, our technical director must carefully study the combination of colours and their shades, and our weavers must patiently place hundreds of reels of yarn on the loom.

These difficulties explain why polychrome velvets, known in the East since the 13th century, in the 15th century were produced only by the most highly specialised manufacturers in Europe, especially in Venice and Florence. A couple of centuries later, their production increased enormously, just when the Baroque reached its highest point, in the 17th century. 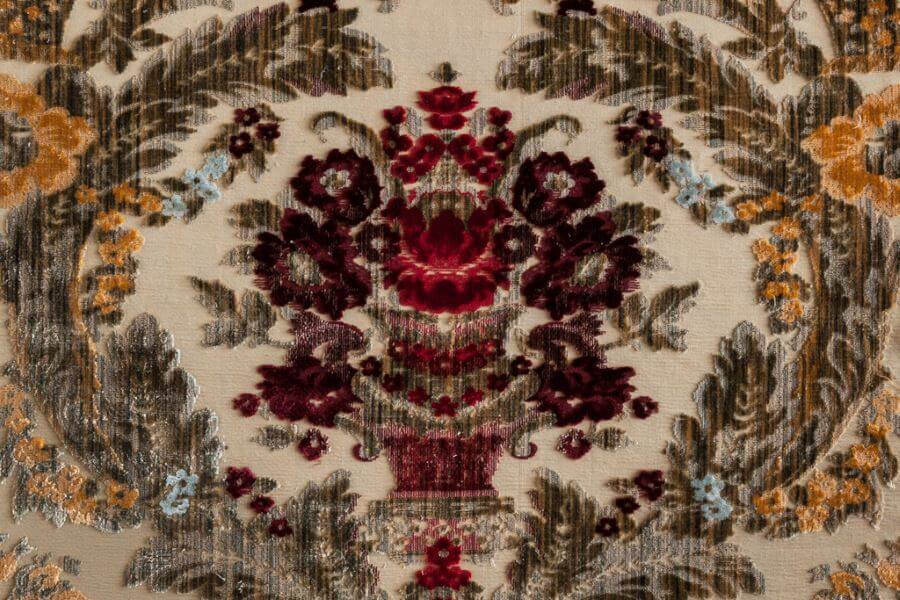 The popularity and evolution of jardiniere velvets

Indeed, during the 17th century jardiniere velvets began to appear in the homes and palaces of the most fashionable aristocrats, first showing small bouquets of flowers, then, after the middle of the century, with increasingly larger designs.

The rich baroque drawings, rigidly symmetrical and busting with baskets, cornucopias and vases full of flowers were later influenced, in the 18th century, by oriental art: they thus started showing grotesques, canopies and all sorts of birds and flowers. Around the 1730s, on the other hand, the trend was towards imitating real flowers as closely as possible.

However, the popularity of these velvets did not die out in the 18th century: there are many examples of jardiniere motifs both in clothing and in furnishing textiles of the 19th and 20th centuries.

Floral velvets have not lost their charm even today, that’s why they’re still part of our catalogue: we constantly update their colours and use them on various accessories, as you can see below. 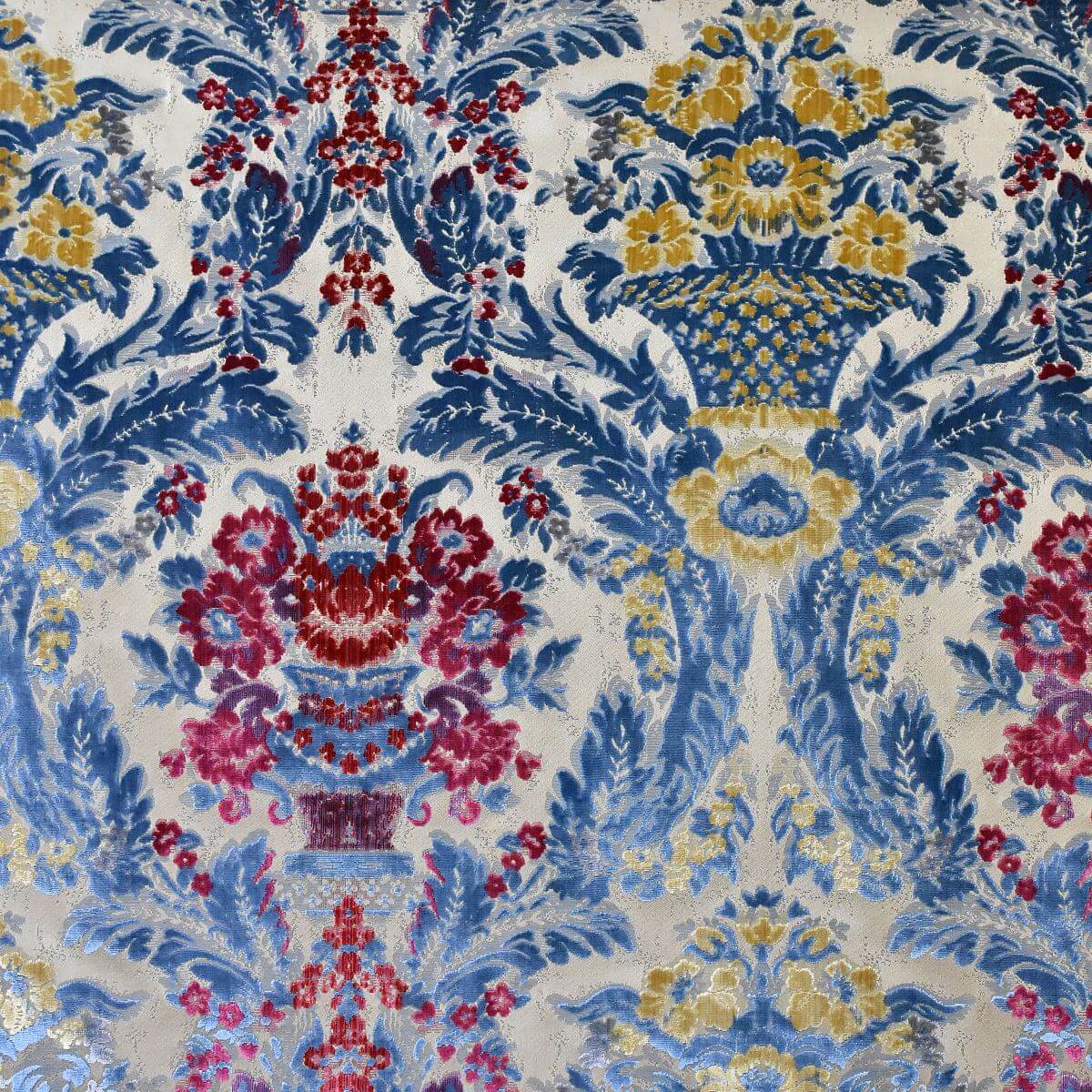 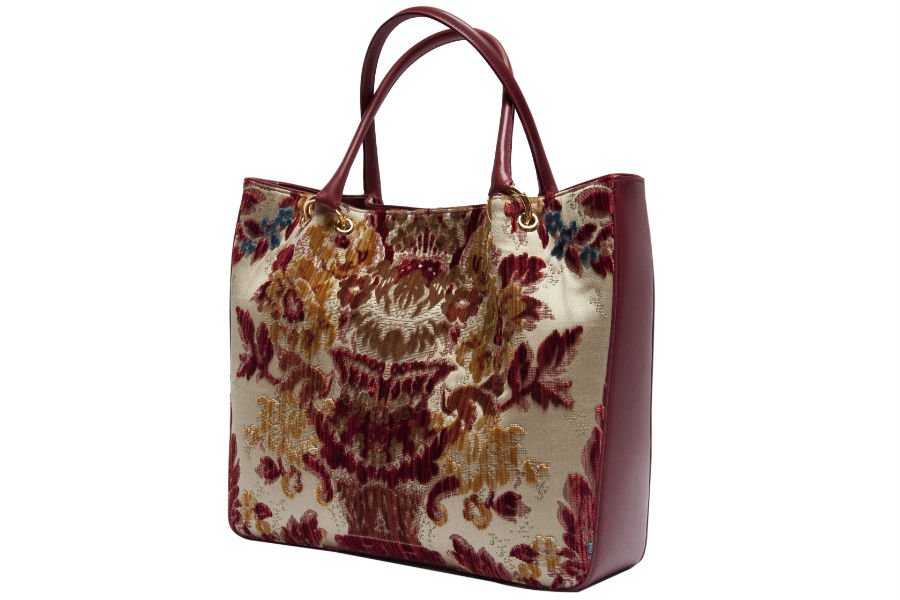 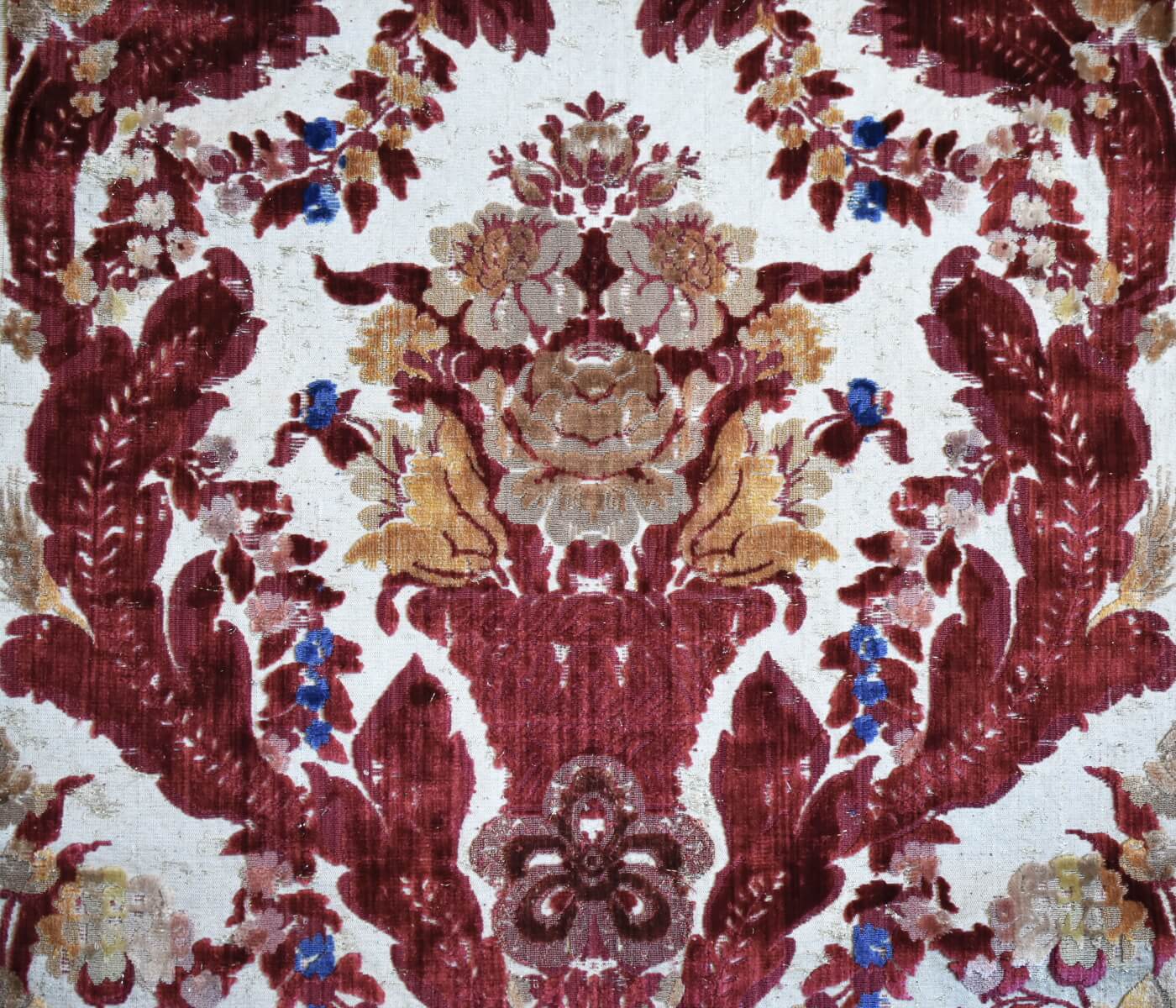 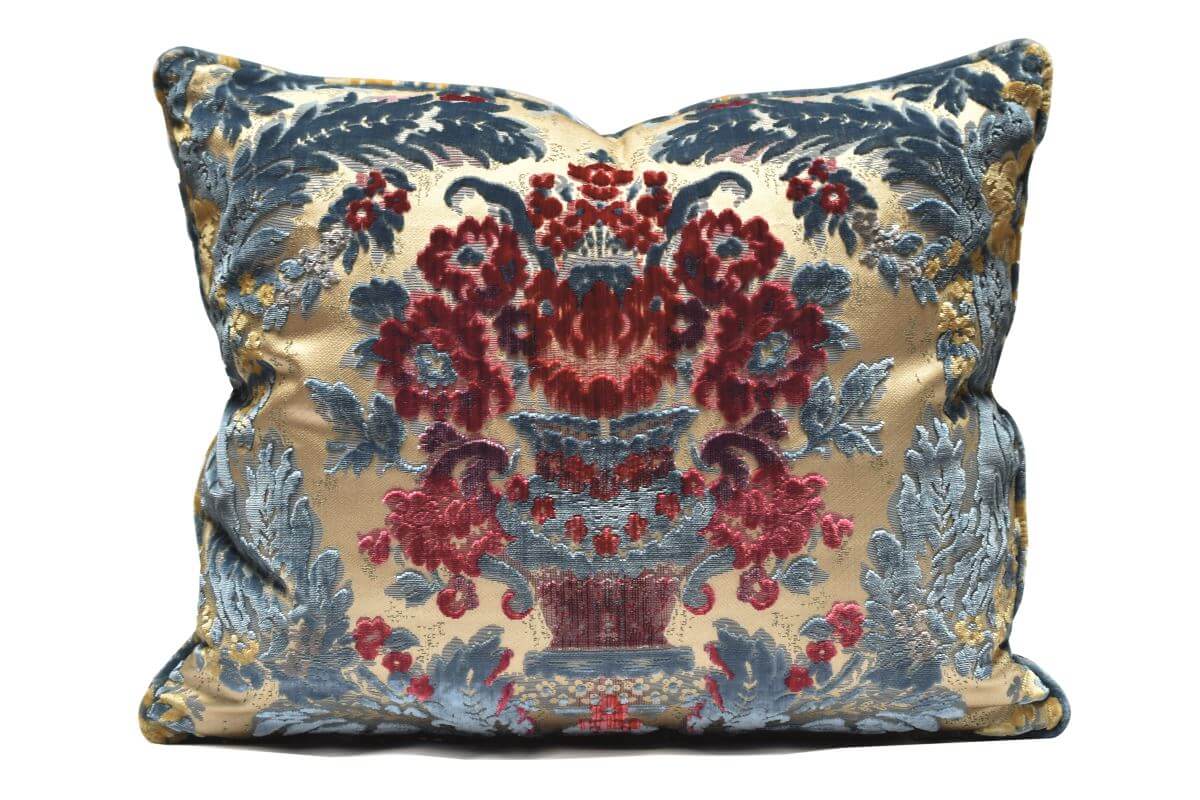