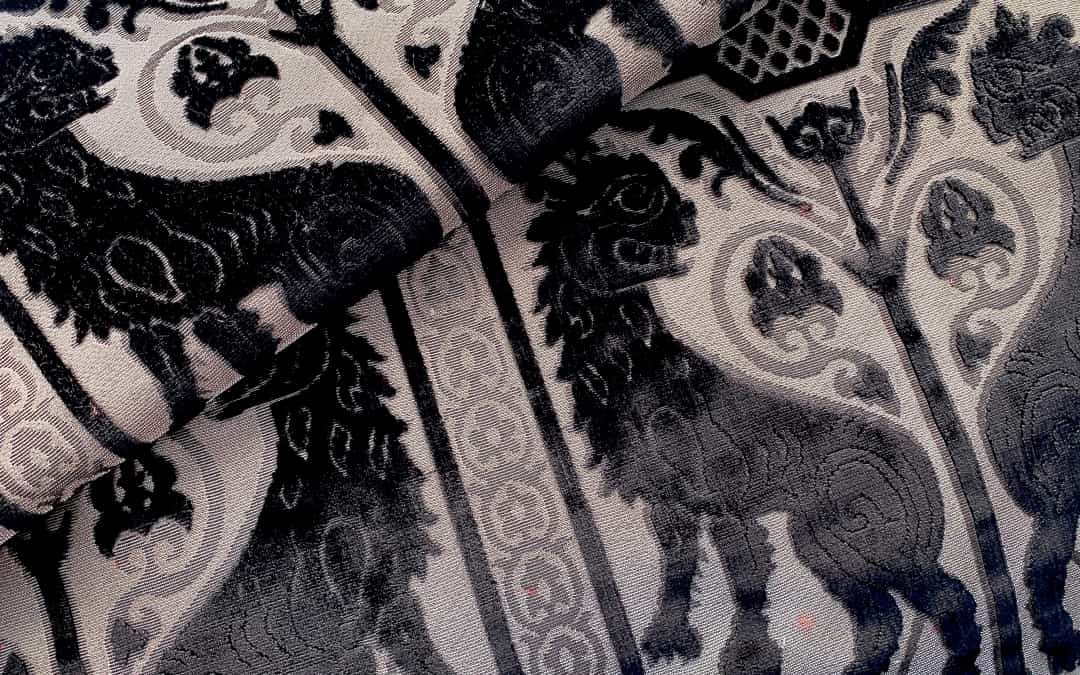 It almost seems like a paradox, but a “non-color” is indeed the favorite color to symbolize elegance and refined style. Let’s explore all our novelty velvets in black and how to use them effectively in interior design.

Black: a Mysterious and Versatile Color

Black is the result of the lack of light or its total absorption, so it is given by the absence of color. As with white, it officially has no hue, but in reality, we can distinguish different shades of black in objects as well as fabrics, such as charcoal black, ebony black, or ink black.

Among the innumerable symbologies associated with this color are those with the origin of life and rebirth in ancient Egypt and with power in the Middle Ages. It is associated with sensuality, mystery, and rebellion. But we love it because, even in interior design, black expresses refinement and elegance, and it can complement either traditional or modern, or unconventional styles. As long as it is not overdone because, as with other dark colors, it can make rooms appear smaller and can be oppressive when used for both walls and furnishings.

Undoubtedly, when dosed appropriately for sofas, armchairs, cushions, or lamps, and combined with style, it creates sophisticated and bold spaces because it is a very versatile color. In fact, being neutral, it goes well with any color. With more vibrant tones such as red, emerald green, and lemon yellow to create more vibrancy; with other neutrals to maintain an understated but not mundane style; and paired with gold for an opulent style.

In addition, it is often used as an accent color, according to a proportion of 60 % for neutrals, 30 % for colors, and 10 % for black details.

The sensual allure of black with the silky softness of velvet is the perfect combination for furnishing fabrics of extreme elegance and refinement. The color black in luxury furnishings lends drama and a sophisticated touch to rooms.

Our collection of fine fabrics has been enriched with black proposals for some of the velvets most beloved by interior designers and architects. We present them to you.

Rinascimento velvet pattern features natural elements typical of the second half of the 16th century, with a lattice structure of intertwined stems forming ogives, embellished with stylized carnation, lotus and thistle leaves, and flowers. A refined Renaissance design embellished and illuminated by metal threads declined in numerous colors to which black is now added.

A silk and cotton velvet with a distinctive texture in which the discontinuous surface creates a unique effect with vintage charm. The color range of Taccheggiato heddle velvet is also enriched with the new black proposal.

Gotico velvet brings back a 16th-century motif reminiscent of Turkish fabrics of the time, with a dynamic and light structure, stylized flowers, and the long Islamic-inspired halved leaf (rumi). Available in numerous colors, from olive green to antique pink, it is visually striking in the new variant, thanks to the sheen of the black silk contrasting with the yellow-gold pattern. 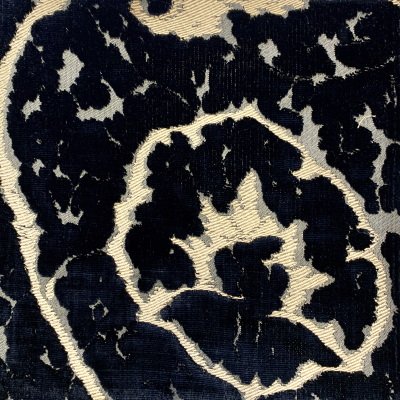 Another fabric with an oriental-inspired decorative pattern is Ca’ d’Oro velvet. Its elegant design, typical of the 16th century, features sinuous vines intertwining in a harmonious composition enriched with flowers, pinecones, corn ears, clovers, and a large central thistle flower that, in the black version, stands out with its yellow-gold color. 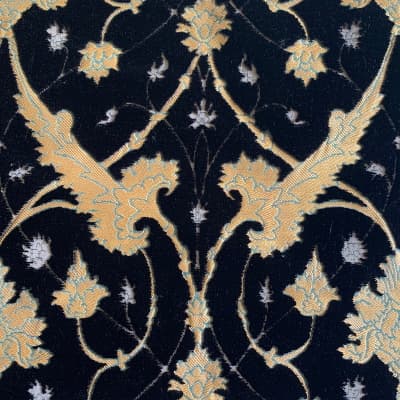 The refined pattern of Da Vinci velvet, with elaborate weaves inspired by Da Vinci knots, has a special appeal in the black version. Indeed, the luster of the silk pile makes this design stand out as it emerges from the background in all its elegance. 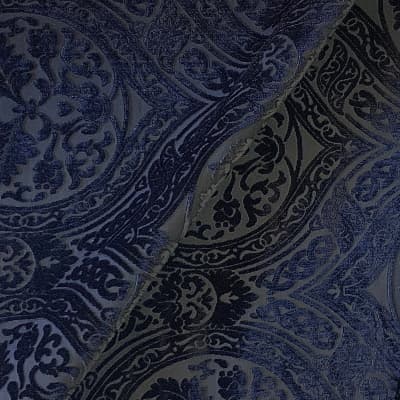 Woven from silk and cotton, Griglia velvet has a highly decorative 16th-century-inspired pattern. The neat geometric composition, with narrow meshes forming small rhombuses, is gracefully embellished with small flowers in the intersections. In the black version, the background is neutral to highlight the decorative pattern.

Lancé velvet, made of silk and cotton, has a contemporary design despite dating back to the 1600s. The neutral-colored background with gold and silver undertones on which the black decorations stand out, makes it particularly refined and easy to match with all neutral tones of beige and gray. 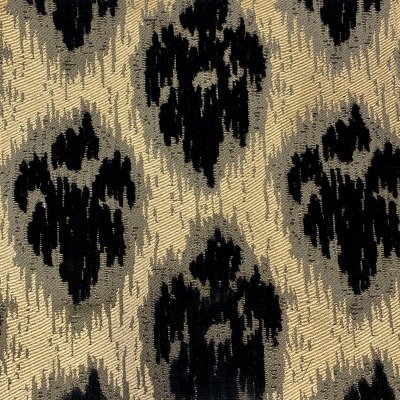 As the fabric that most represents our Tessitura, since we chose its design for our logo, the Leoni Bizantini velvet is now also available in black. The two lions that stand to protect the tree of life are made of shiny black silk and appear in all their glory against a background embellished with silver metallic threads. 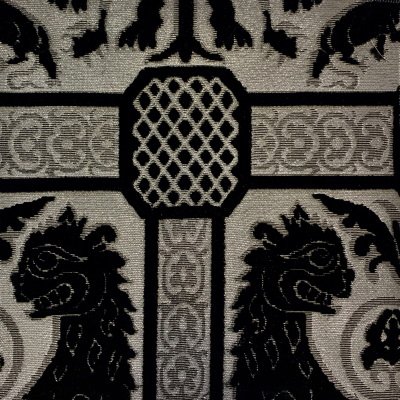 One of the most beloved animalier fabrics, Coccodrillo velvet mimics the skin pattern of the crocodile and becomes a must-have in the black version. 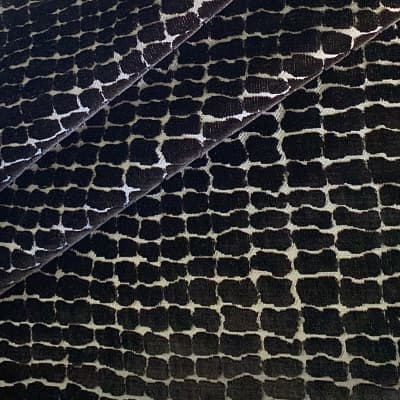 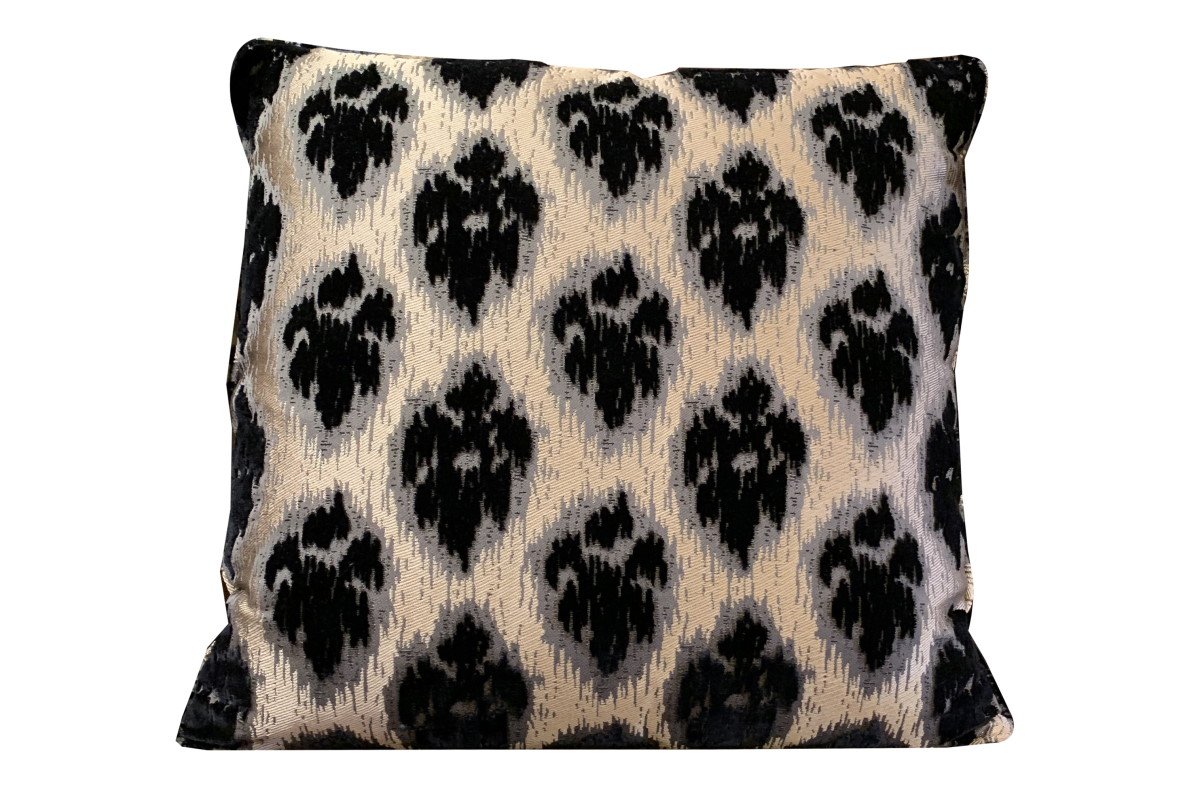 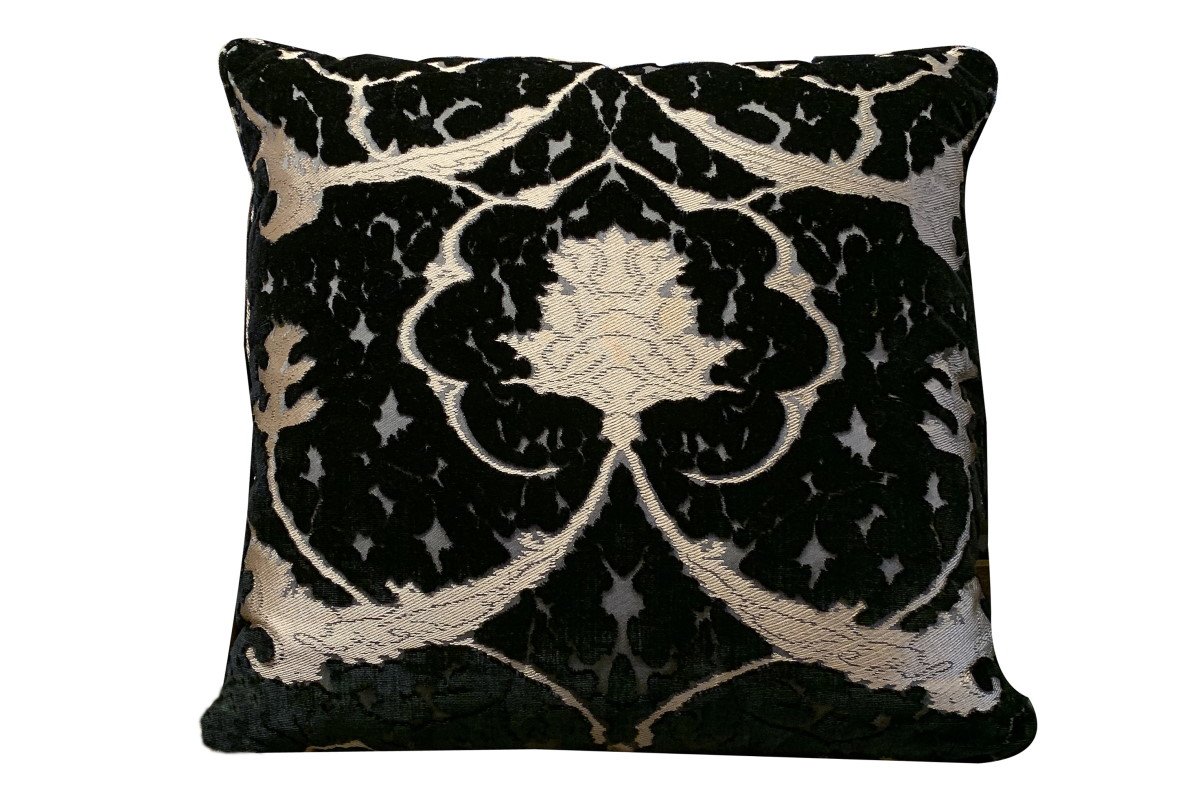 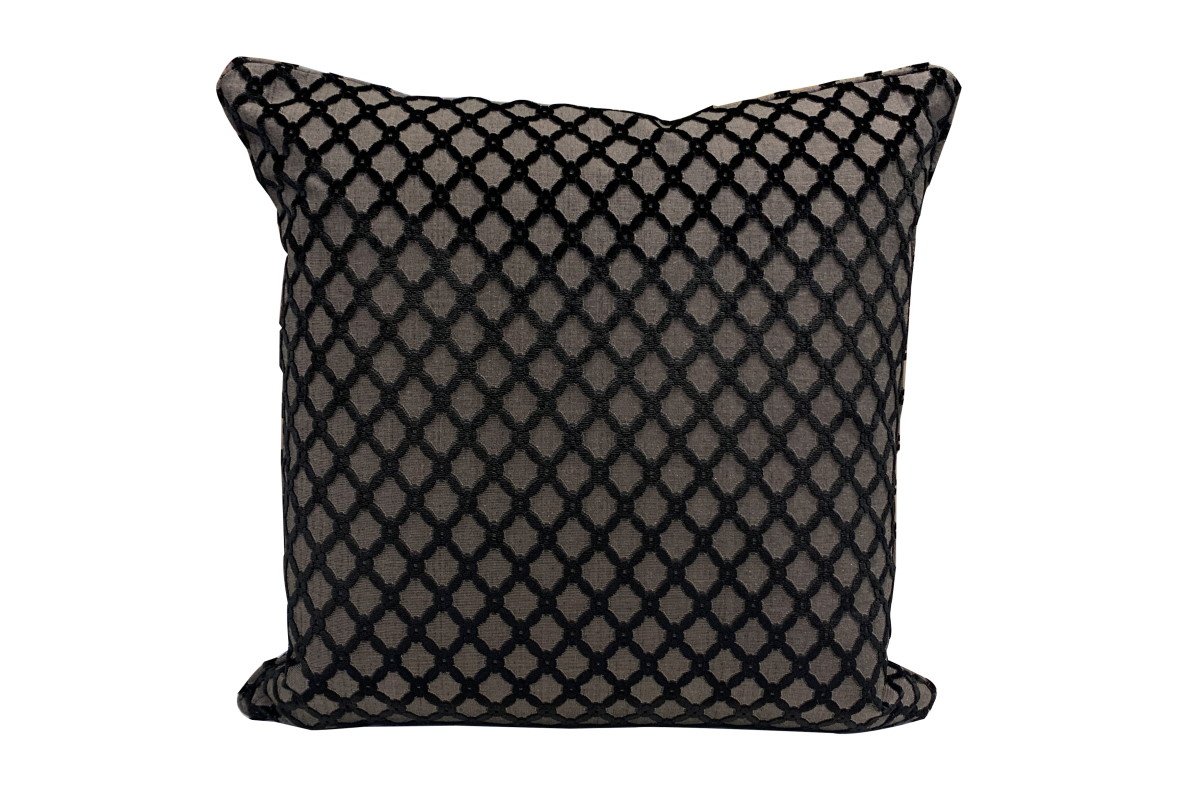 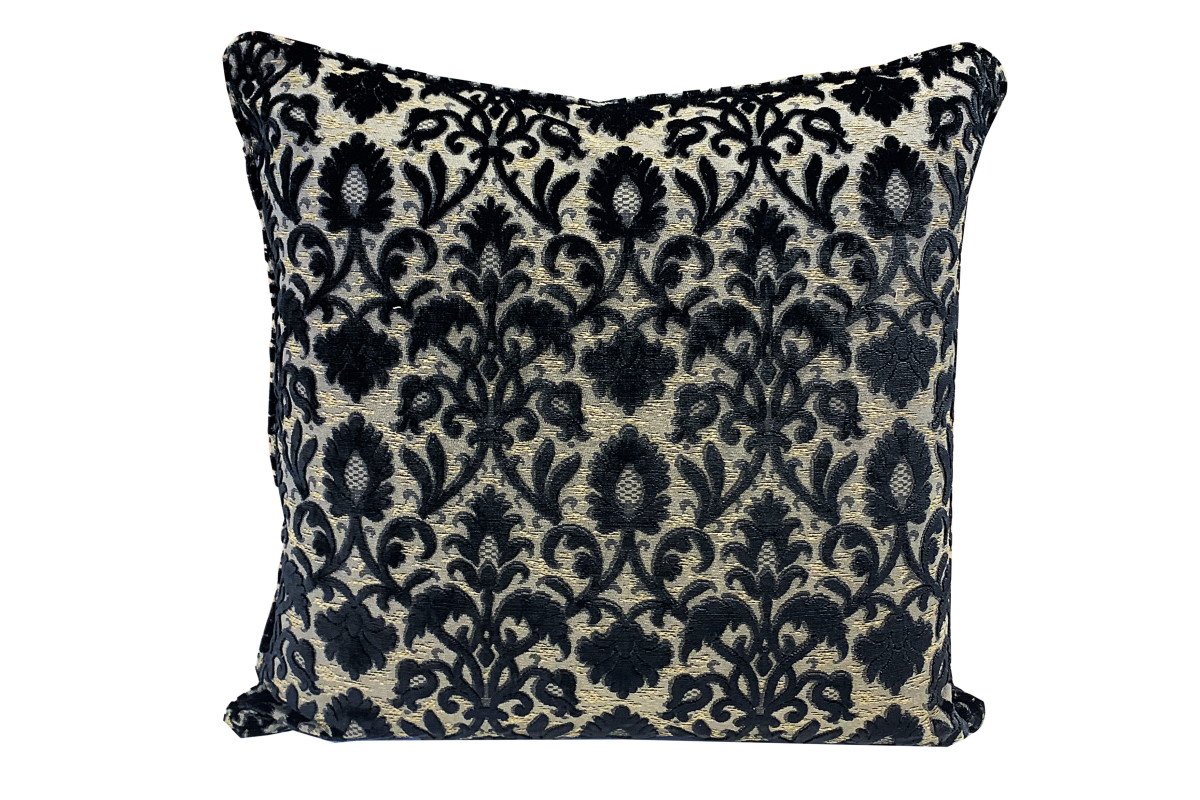