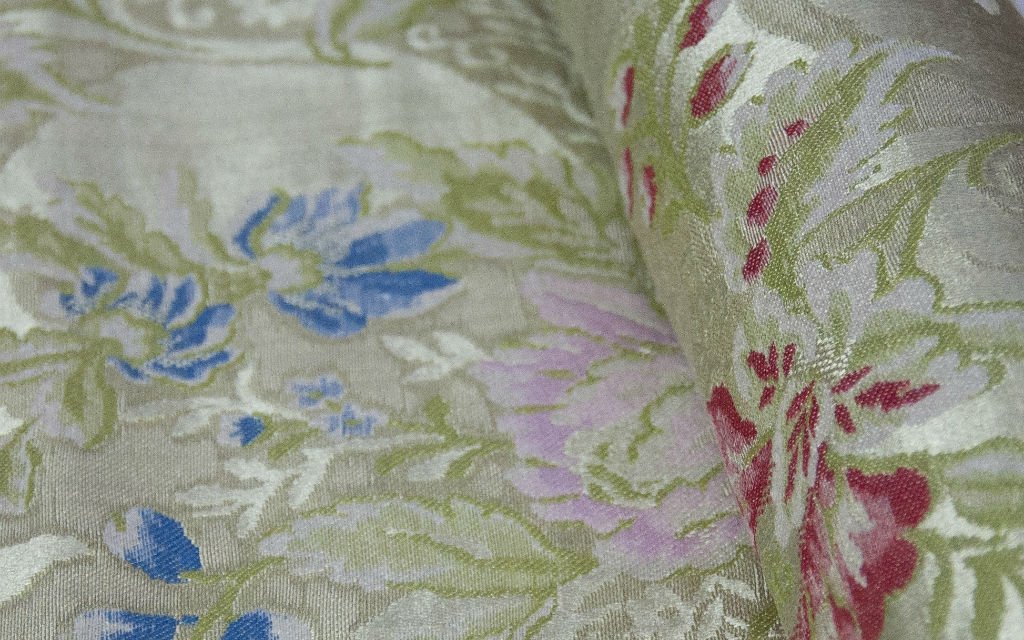 A fabric fit for a king, or for a palace’s furnishing, on which you can maybe add some gold or silver threads? Yes, there’s one, and for once we’re not talking about velvets. You’re about to discover the secrets of brocaded fabrics, some of the most precious textile products of all times. But what makes them so fine?

In the article on the differences between the types of fabrics for upholstery we told you that the main feature of brocades is their embossed design. You can get it by weaving additional wefts over the ground, and that’s why the pattern seems separated from it. The name “brocade” derives from this very feature: in Old Italian, the adjective brocco meant “provided with studs, with threads in relief”.

But in that article we didn’t tell you that you can employ this technique even when using another fabric as the ground.

Just to give you an idea of what we mean, if the ground fabric is a lampas, the result looks like what you see in the photo here below. Its flowers clearly stand out from the base, that’s the reason why we called it lampasso Broccato, i.e. “brocaded lampas”.

And how is such a fabric produced?

The production of brocaded fabrics across the centuries

The answer is: it depends from the age.

In the 18th century, on a draw loom, a machine that required 2 persons working on it: the weaver and an assistant. The latter’s task was to pull the cords that raised the warp threads, so that they could intertwine with the weft.

If there’s an additional weft – or more than one! -, just like these fabrics need,  you can imagine how complex the process becomes. And why only the wealthiest people could afford them, since the Middle Ages. Indeed, their high price wasn’t only due to the use of silk to produce them: brocades already existed in the Byzantine Empire, well before the world discovered how to produce silk, and they were made of linen or wool.

After the Jacquard loom was invented, producing brocaded fabrics got much easier. Since the beginning of the 19th century, what was once the assistant’s task was now performed by the machine. As a consequence, weavers themselves could set in motion the punched cards that moved the right threads to create the pattern.

The technique to create them has therefore changed, but their value has remained the same: brocades are still precious fabrics, due to the kind and number of threads they require, and to their complexity.